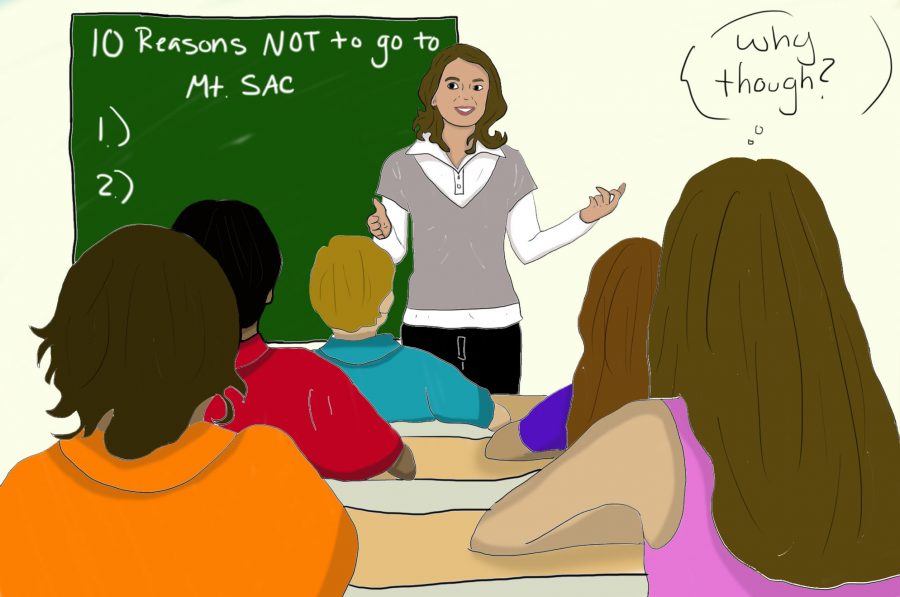 Storm clouds loomed overhead as we sat organized, but divided across the football field of Walnut High School. We were divided not by our hair color or skin tone, but rather by our GPAs. Those students who had earned honor status received bright gold cords that lay against their white or baby blue graduation gowns from guidance counselors who praised them for their hard work. The rest of the non-honor roll students, like me, didn’t get that same special speech. No, we were given no other recognition besides the basic “congratulations.” On top of that, we were forced to sit at the back of the field and handed our diplomas last, by which time attendees had already began filing out.

My graduation was symbolic of my entire high school experience. My time at Walnut High School was filled with competition as the environment was heavily fueled by a need for recognition. Those with higher GPAs were elevated in status. They received favoritism from other students, and those who did not were ostracized.

The rest of us, the ones below that golden 3.5 GPA, became the butt of the school’s running joke: we were destined for nothing more than Mt. San Antonio Community College.

For whatever reason, students were hell-bent on making attending Mt. SAC look like failure. Over time, it became a self-fulfilling prophecy where the students who had been told that they were not good enough found comfort in this self-depreciating joke. I would often hear my friends complain about their grades. “If I don’t pass this class, universities won’t accept me and I’ll be forced to go to Mt. SAC.”

The stream of jokes was endless. Mt. SAC became a joke for my classmates, but what was even worse was that my teachers played a part in it too. During my junior year, a teacher once said, “Put your index finger and middle finger together; place it on your neck. Do you feel a pulse? Congratulations, you’re accepted to Mt. SAC.”

It got so bad that people began to make jokes about how they’d rather be dead than attend Mt. SAC.

Yet, even as I became more comfortable with my decision, my teachers were not. Teachers who witnessed my grades turn from Cs to As, who watched as my GPA rise from a 2.0 to a 3.5, and who saw my writing consistently improve despite being classified as an English Language Development student, could not support my school of choice.

A teacher, who had stayed in contact with me since my freshman year, asked where I was planning to go to college and offered to write me a recommendation letter. When I told her that I would be going to Mt. SAC, she made me feel like a total disappointment. She wasn’t the only one. I was constantly questioned about my decision.

At first, I didn’t know how to respond or explain my choice. They wouldn’t understand my situation. I knew what I had to say, but I couldn’t. The constant attacks by my peers about community college made me feel embarrassed. I was made to feel that I wasn’t as smart as the others.

No matter how much money I received from a Pell Grant, my family would never be able to afford to send me to a four-year school. I would have to attend a community college for a few years and then transfer out, hoping I would be able to get enough financial aid to allow me to attend a university. What my teachers and counselors at Walnut High School had failed to mention was that tuition at a four-year university is incredibly expensive.

My parents wanted me to attend a university, but they were content with my graduating high school with or without the honor cord. “Honors” wasn’t something my parents even understood. They were foreign and new to the American education system. I had to explain to my mother the differences of a four-year university versus a community college.

On another occasion, a recent Walnut High graduate came into my class and talked about going to a university and avoiding community colleges. I felt like they were taking extra measures to ensure the future class wouldn’t go to a community college. There it was again — a personal attack on my future. I got over it eventually, finishing my assigned work and keeping my head held high.

I started my first semester of community college with a skewed mentality. I believed that the professors at Mt. SAC would be a joke, that the classes would be easy, and that the hardest part would be fighting for a spot in a class.

Instead, I was shown a completely different perspective by professors and students alike. The professors had studied at some of the best universities in the country, some of who even taught there. Many are published authors, renowned speakers and scholars in their field. They also sincerely care about their students and their futures.

The students are driven and independent. Many work full-time and go on to transfer to universities throughout California and the country, while others earn vocational degrees and begin careers right away. I realized many were in the same financial situation I was, but also like me, were determined to succeed.

Halfway through my second semester, I now see that everyone who gave me advice in high school was wrong. Mt. SAC might not have fancy dorms or the university title, but the professors are experts and professionals who do not make it easier on their students simply because “anyone with a pulse can apply.” Instead, they demand more of me compared to my friends who are attending a university. I receive more one-on-one time with them because my classes are smaller than the lecture style classes of four-year colleges. My professors constantly tell us they want their students to succeed, offering help and leading programs that equip us to achieve our goals and transfer to a university as quickly as possible.

Sara Mestas, a counselor in the athletics department at Mt. SAC, was unable to go to a four-year university and instead attended Mt. SAC until she was ready to transfer. “I wasn’t eligible to go straight to a four year, and I visited Mt. SAC with a friend, and I thought it was beautiful,” Mestas said. “It looked like a university to me.”

Mestas transferred from Mt. SAC to California State University, Fullerton after taking a break to begin working and start a family. She said Mt. SAC made the transfer process as easy. She said returning to school despite the break did not affect her ability to transfer once she got back.

I believe the source of community college bashing stems from ignorance. Mestas agreed that those who criticize Mt. SAC must not be able understand how important the college is to students who can’t afford to go to a university.

“Once you’re here, you realize this is a great springboard to any university that you want to go,” Mestas said.

Professor of Journalism and Student Media Adviser Toni Albertson sent her son, Andy, to a community college for the first two years before he transferred to University of California, Berkeley.

“I will never understand how high school teachers could put such pressure on students to attend a university,” Albertson said. “Students right out of high school are often confused about their majors. Community college not only gives them the chance to complete their general ed courses while testing the waters in various disciplines, but it saves them money while doing so.”

Albertson is an advocate for the community college experience.

Albertson added that if it weren’t for two of her inspiring community college professors, she would have never pursued teaching.

“I made the decision to teach after working for years in media, and I based my decision on what I observed at the community college level,” Albertson said. “My professors were the most caring I’d ever met, and remained dear friends throughout my life, rooting me on to the completion of my master’s degree.”

She remembered her mentor, Gary Morgan, a community college professor, who told her something she’d always remember.

So, if you happen to attend a community college and hear stories of friends who were able to go directly into a university from high school, refuse to let yourself get down about being at a two-year college. Remember why you’re here and everything that community colleges offer you over universities.

I’m here to learn everything I can from seasoned professors, take the classes I need to transfer, explore college major opportunities, and move on to a university as a confident young woman with zero debt.