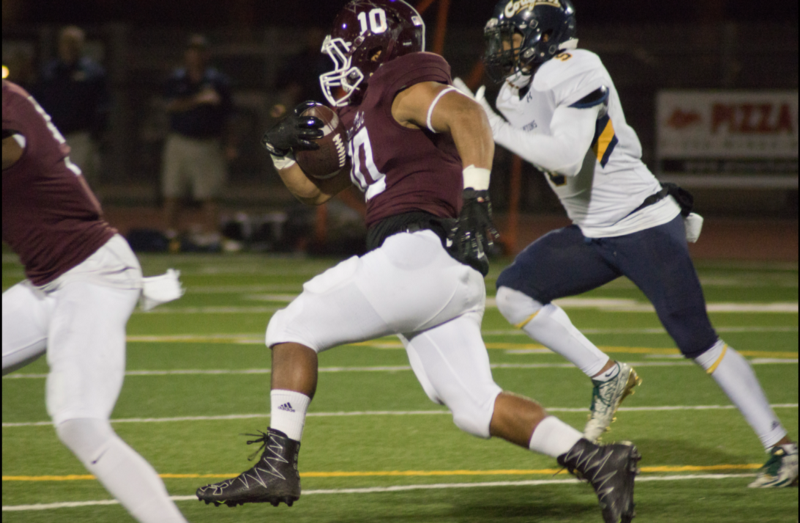 The game epitomized the season for the Mounties, a slow beginning followed by an array of big plays and explosion in the end; the signature quality of this Mt SAC football team in 2016. Thus began the Golden State Bowl — a CCCAA (California Community College Athletic Associate) event — against College of the Canyons on Saturday November 19 at Covina District Field.

The 1st quarter began with both teams feeling each other out, but the game didn’t really get underway until a fumble on a punt return by Mt SAC. This set up College of the Canyons in good position to score and they did in fact capitalize, scoring on a 31-yard field goal a few minutes later. Not the start you hope for in a big game, but nothing unusual or daunting for this Mt SAC football team.

The Mounties would respond with a scoring drive of their own, as has been customary for them to respond to adversity all season long. They went on a methodical drive that culminated with a short yardage run in the red zone by Tekki, Sateki Finau, — a fan favorite sophomore starting running back. Once they found their rhythm in the game, Mt SAC began to hit their stride.

The Mounties would score two straight possessions after this point, first with a 34-yard field goal by kicker Brandon Garcia. After getting a stop on College of the Canyons, Mt SAC would go down the field once more and get in the end zone on a 27-yard pass from quarterback Anfernee Bruton to wide-receiver Tavonn Salter. The touchdown came with 17 seconds left in the half and the team would take a 17–3 lead into halftime, along with all the momentum.

The third quarter was slower pace than the first half, with Mt SAC controlling the entire game on both sides of the ball. They both prevented College of the Canyons from scoring at all and also added on their second field goal of the game to add to their lead and go up 20 to seven.

The fourth quarter was just a coronation for the team, as they had established control of the game and their opponent for almost the entire game now. They would just run through College of the Canyons defense. Tekki would finally put the finishing touches on the game with an 11-yard run towards the end of the 4th quarter, fitting for a team leader this season. As the game clock was showing both teams seasons came to and end and they acknowledge each other at mid-field one last time.

Under a winter moon the teams were being recognized by the public announcer and the top performers being awarded. Tekki, was named Most Valuable Player of the Golden State Bowl. He had 21 rushing attempts for 102 yards and two touchdowns in the biggest game of the season, a prime time performance. He led the Mounties in rushing touchdowns (10) and yards on the ground (640) this year.

The night ended with the Golden State Bowl trophy being presented to the Mt SAC team and coaching staff. The team had played a masterful game and ended the season with a record of nine wins and three losses including the postseason game. They held College of the Canyons to only one field goal and no touchdowns, something the defense has done four times this season.