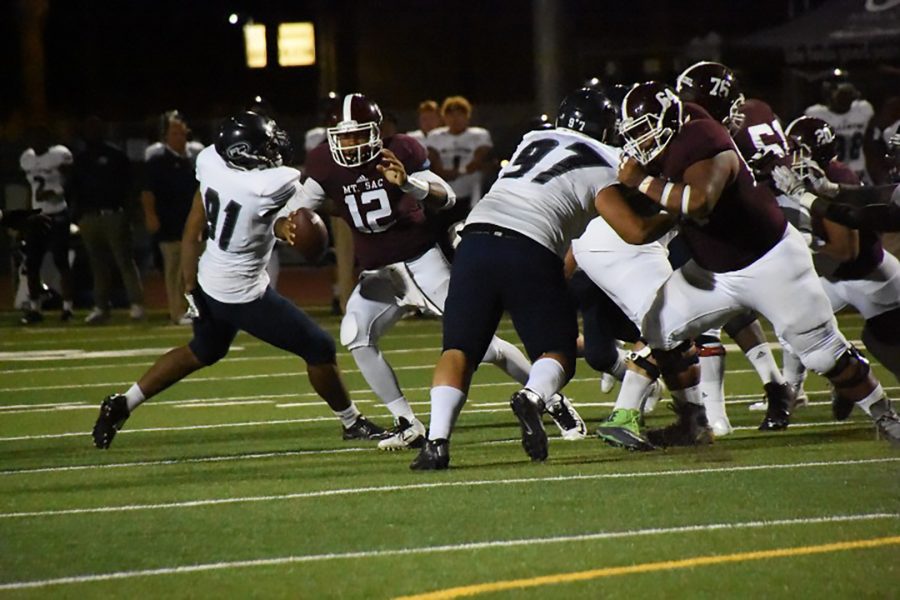 Edgar Segura’s journey to Mt SAC was one that flowed downhill, much like his running style. Segura is from the Central Valley and became a Mountie after an arduous upbringing.

“I come from a town called Mendota, a hard-working town,”he said. “In high school I worked in the fields up there. Picking up cantaloupes, grapes, tomatoes, whatever to help my mom pay the bills.”

Segura grew up in a town of immigrants, chief among them Mexican immigrants that worked the fields of Mendota picking fruits and vegetables in brutal heat for a living. Food production is a big business, with the state of California leading the country in the industry. Cheap labor provided by immigrant families is why it is so profitable.

He was raised by a single mother, who he said shaped his outlook and influenced his life. In fact, without her he wouldn’t be playing football.

“When I was little, my mom saw two kids with shoulder pads and helmets on. She told me, ‘That would look cute on you, maybe you should try it next year.’ It was my mom that made me want to play football.”

He added, “She was mom and dad for me. She motivated me to never give up and just keep moving forward no matter what.”

Segura would begin his career as a tight end, eventually making his way to quarterback, and finally running back. This is what comes most natural to him, and to how he approaches life. With toughness.

“My coach saw that I was physical and liked to run people over. At first he moved me to quarterback, but then I was moved again to running back obviously.”
College, for Segura, was not something that was taken for granted or even expected.

“To be honest, I wasn’t thinking about that until my senior year of high school,” Segura said about playing at the college level. He wasn’t a highly recruited prospect, but once he realized it was a possibility, one college caught his attention.

“My plan was to attend Fresno State, that’s my dream school. My grades weren’t where they were supposed to be so I couldn’t.”

Fresno State is a good football college and relatively close to his home, a win-win for Segura. However, life doesn’t always go according to plan.

“I came to Mt SAC where the best athletes compete. I wanted to get better at what I do,” he said.
Football goes hand-in-hand with what Segura is used to and what he has lived. Hard work, testing your physical limitations and working for a paycheck or for a touchdown. Football also helps pay for school, which for Segura is a number one priority.

“I want to get a degree. I don’t want to keep working in the fields. That motivates me to come to school, show up to class, and go to practice and go 110 percent every day.”
Segura said if he wasn’t playing football there was little options for a better life.

“To be honest, [I’d] probably be working in the fields,” he said.

His story piqued the interest of ESPN a few years ago. The sports channel produced a documentary on his high school football team in Mendota, covering the life of a football team in a town where the main work is picking crops.Being so far from home is an adjustment for Segura. His family is still living in Mendota so he tries to talk to them every day on the phone.

“It’s a far away drive, and the bus to here is like seven hours,” he said.

Now, the focus is football and growing up on his own.

“I live in the heights with seven roommates,” he said. “We are like brothers; it feels like home.

It’s a different experience to be away from home, but it’s a life lesson. You have to be learn how to live by yourself and not depend on your parents.”

He currently studies criminology and hopes to transfer to Fresno State. If not, he’ll go wherever he is offered a scholarship. He chose criminology because of an experience he had as child.

“Back home there was this cop that stood out to me because of how nice he was. My town is like 90 percent Mexican, so some cops would take advantage of them because they didn’t speak English. That made me want to be in a position to help them and put a stop to that.”

Segura wants to be a police officer to help people, specifically those in his hometown who are vulnerable because of their status and because they may not understand or speak English. He is a football player, yes, but more importantly, he is a man from Mendota with one goal.
“Being able to go back home and when I have kids, and showing it to them so they can achieve the same goal one day.”