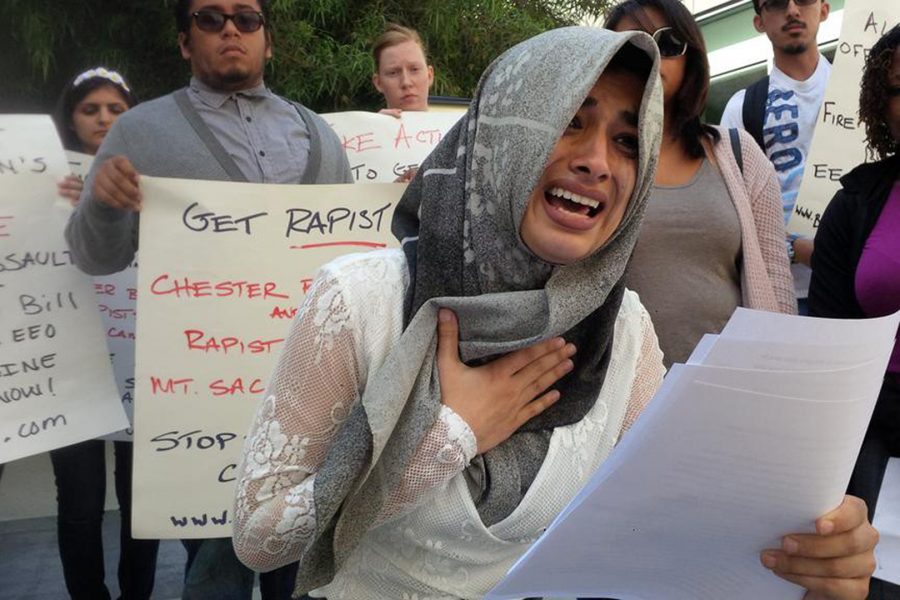 On the night of December 12, 2013, Aarefah Mosavi, a 23-year-old peace and conflict studies major at the University of California, Berkeley and graduate of Mt. San Antonio College, alleged that Chester Brown, a fellow student at Mt. SAC and tutor at the T-MARC center, raped her while the two were at the farm located on campus.

Mosavi alleged that as the two were leaving, Brown demanded that she remove her hijab, and when she refused, he grabbed her and raped her in the barn while they were there alone. Mosavi said that Brown, who she considered a friend, became obsessed with her hijab, often making comments about being able to see her neck.

Mosavi reported the alleged rape to campus officials January 27, 2014. On February 11, 2014, she met with Mt. SAC’s Director of Equal Employment Opportunities, Lorraine Jones, whom she said told her that, “punitive actions could be taken against Chester Brown, and said they would investigate.

The next day, Mosavi reported the incident to her supervisor, John Cardenas. According to the lawsuit filed by BAMN attorney, Ronald Cruz, on Mosavi’s behalf, Mosavi told Cardenas, “Brown had made disparaging comments about [her] and made her uncomfortable.”

Since then, Mosavi has filed a lawsuit against Brown and members of the Mt. SAC administration. Defendants named in the case are: Lorraine Jones, vice president of human resources, James Czaja, president of Mt. SAC, Dr. Bill Scroggins, and director of Tutorial Services, Bailey Smith.

According to Ronald Cruz, attorney and organizer with The Coalition to Defend Affirmative Action, Integration, and Immigrant Rights and Fight for Equality By Any Means Necessary (BAMN), “Mosavi’s case is currently in discovery phase and is awaiting the next trial date set to be in January of 2018.”

Mosavi’s attorney, Monica Smith, also commented on the state of Mosavi’s impending trial. During the discovery phase, Smith said they will be having depositions to question and obtain oral testimonies with those involved and handling the investigation of Mosavi’s case, like the Mt. San Antonio College Administration. Multiple attempts to obtain comments from the attorneys of the accused, Chester Brown, were unsuccessful.

Within the last school year, there have been a few underreported sexual harassments that took place on campus. Some incidents occurred outside of school grounds involving students as the victims—all of them women. One incident was on July 6, 2016. A male student reportedly put his hand on a female student’s right cleavage inside the library. That case has been underreported with hardly any knowledge amongst faculty and students. Incidents off campus do not make the school crime log.

Bob Wren, a 28-year veteran for the Sheriff’s Department and current public safety officer, says the crime log will be on the school website for an easier viewing. That may prevent further incidents, such as assaults and harassments from occurring, because students will be aware of these incidents upon checking the log. As of now, public safety does not run a social media site such as Twitter, because it will require hiring an employee to run the news online. Wren, a father of one daughter said, “My priority is to prevent these types of things from happening, but we can’t control everything. I want to prosecute and give justice to whatever case.”

Yet Wren does acknowledge a need for an effort to report on crime when it does happen at school. He thinks perhaps promoting the crime log online can influence more students to review them. “One is already too many,” he adds. “Physically weak people should never be taken advantage of.” Wren stresses that public safety does not cover-up these types of incidents.

Mt. SAC president Bill Scroggins also commented on the situation involving Mosavi. When asked how the school has handled the issue for current students or incoming students who have the knowledge that the college is facing a lawsuit, Scroggins said, “There was a period of time where the BAMN organization came on campus and had some demonstrations and we were very supportive of the rights for individuals to have free speech on our campus within the constraints of access to the public areas and so we very much supported that. And they were, uh, the kinds of things that said about the importance of taking appropriate action with respective violence against women is quite appropriate. So we were glad to have them here and raised that serious issue for our society.”

However, in contrast to Mosavi’s statements regarding a lack of honest and adequate investigation of her case by the college, Scroggins believes the administration couldn’t have done a better job in handling this sensitive case. When asked if he believes the school did everything possible, and if there is anything that could’ve been done better, Scroggins answered, “Yes, and no.”

Because of his position as the college president and the school’s reputation as one of the biggest community colleges in California, Scroggins is worried about bad publicity for the school.

“The college is always interested in getting the right message out to people about our protection of students. With the results of the recent presidential election we just had a forum here on campus yesterday with 150 students here talking about how we were protecting their rights. So that’s a very important message that we send out regularly,” he said.

Despite the administration’s alleged cover-up and attempts to silence the matter, Smith, Mosavi’s attorney, is adamant about pushing the case forward.

“The case is going forward. [The opposing side] tried to dismiss the case, but the judge denied it,” Smith said. “Coming January 2018, we expect to win, and they will lose,” she added.