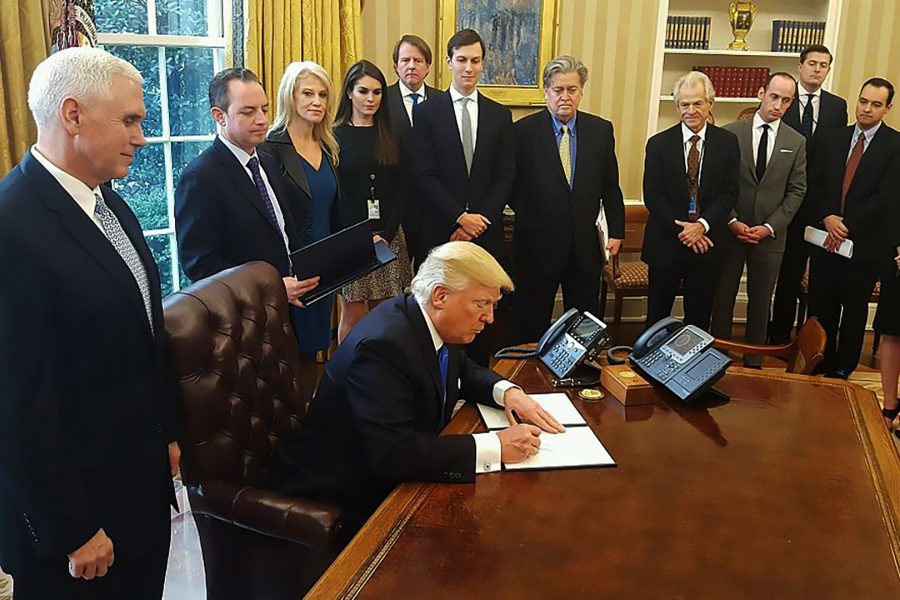 Documenting a president’s executive action today is the most in-depth it has ever been. The numbering of executive orders was not started until 1907 by the Department of State and applied to all filed orders dating back to 1862. It wasn’t until 1936, however, when much more thorough documentation began with the Federal Register Act under Franklin D. Roosevelt. Ironically, FDR sets the record for the most orders, issued at an astonishing 3,721–an annual average of over 300 throughout his four terms.

The Federal Register Act specified that some orders are exempt from publication if they had, “no general applicability and legal effect,” meaning that the text of some orders remains unavailable. This is important to note, with regard to the fact, that many unnumbered orders exist in compilations. The total of these compilations is unknown, though the most notable one includes “over 1,500” unnumbered orders. Some historical expertise involved in compiling data on all executive actions has even noted that distinctions can hardly be made between orders- numbered or not- on the basis of subject matter or other aforementioned reasons to exempt.

With that – here is a full list of the executive orders, not including memorandums, proclamations, or other alternative titles to action, that Donald J. Trump has so far issued as the 45th President of the United States.

Issued just hours after his inauguration and aimed at reversing ‘Obamacare’, Trump’s very first executive action states intentions to “seek prompt repeal” of the law in order to minimize the “economic burden” that may affect the government, business or individuals. Directions for increasing each state’s control over health-care laws are also included.

This order aims at refining project timeliness and outlines how Trump’s administration will speed up environmental reviews and approval of infrastructure projects deemed “high priority”, largely referring to the reconstruction of highways, bridges and airports. Responsibilities are given to the Chairman of the Council on Environmental Quality (CEQ) to determine a project’s environmental impact within a month following requests.

Regarding one of Trump’s most familiar campaign promises, this order instructs the Department of Homeland Security to begin construction of a 1,900-mile long wall along the U.S.-Mexico border, and to prepare congressional budget requests for it. It is also stated to end “abuse of parole and asylum provisions” regarding the removal of undocumented immigrants. 5,000 more Border Patrol agents are to be hired along with the implementation of facilities near the border intended to harbor those who are undocumented- part of the end of “catch-and-release” protocols.

4th Order: Enhancing Public Safety in the Interior of the United States (Jan 25, 2017)

Outlining changes on immigration policy, including the stripping of federal grant money given to sanctuary cities, this order instructs the secretary of homeland security to hire 10,000 more immigration officers and provide weekly crime updates committed by undocumented immigrants. The order includes creating an office for assistance to those who are victims of crimes by undocumented immigrants, along with calling on local and state law enforcement to apprehend people in the nation illegally.

This order suspends refugees entering from seven Muslim-majority countries- those phrased by Obama’s security agency as “countries of concern”- including Syria, Iran, Iraq, Libya, Sudan, Yemen and Somalia for 120 days, however Syrian refugees are suspended indefinitely. Immigrants from these same countries are also suspended for 90 days. During the time of this ‘ban’ both the secretary of homeland security and secretary of state are instructed to review and revise the refugee admission process.

The order prohibits administration officials from lobbying for 5 years after leaving office and includes a lifetime ban on lobbying a foreign government. Other restrictions regarding lobbying are also included, including the ban on appointees accepting gifts from registered lobbyists. Also appointees who were former lobbyists are banned from participating in any issues they petitioned for within the last two years.

This order mandates that the administration’s departments must toss two regulations for every new one that is proposed. The order states, “the total incremental cost of all new regulations, including repealed regulations, to be finalized this year shall be no greater than zero.” In other words, regulatory spending may not cost more than $0.

This order identifies the administration’s “Core Principles” for regulation of U.S. finance. These principles include making regulation “efficient, effective and appropriately tailored,” preventing government bailouts, and ensuring that U.S. firms are competitive with companies abroad. The order also instructs the treasury secretary to review financial regulations and report to the president 120 days later on whether existing policies reflect the order’s principles.

This order aims at creating new legislation to reduce crime, including drug trafficking, violent crime and illegal immigration. Attorney General Jeff Sessions is directed to create a task force that would propose this new legislation, and is mandated to submit yearly reports to the president.

This order is aimed at reducing organized crime by enhancing cooperation with foreign governments and the ways agencies share information. Gangs, cartels and racketeering organizations are targeted along with human trafficking, drug smuggling, financial crimes, and criminal cyber attacks- all identified as “a threat to public safety and national security.” The Threat Mitigation National Intelligence is to review and recommend changes to the practices of federal agencies before reporting to the president within 120 days.

12th Order: Providing an Order of Succession Within the Department of Justice (Feb 9, 2017)

Federal agencies are instructed to designate an official as its Regulatory Reform Officer. These newly appointed officers are to oversee the administration’s regulatory Deferred Action reform agenda, which has been outlined in the previous orders. These officers are to be designated within 60 days of the order.

The orders above are largely vague when considering their affect regarding college students, at least for the time being. Any executive action that reveals some notable effect on students- such as changes to the previous administration’s Deferred Action for Childhood Arrivals policy (DACA)- will be covered. Check back with SAC on Scene for continued coverage and updates.