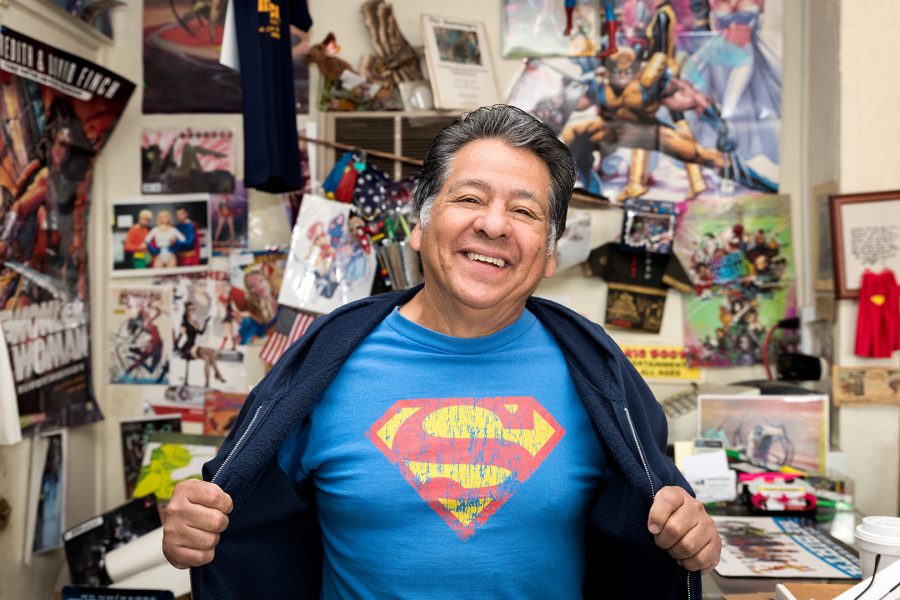 Beyond an unassuming exterior lies a small haven filled to the brim with stories and characters spanning universes beyond our own.

The Superman symbol hanging in the window signals comic book fans to the treasure trove that is Funny Business Comics in Pomona.

Walls are lined with shelves and well-worn boxes containing comics of all kinds spanning years. From the old school Superman of Alex Ross to the bold lines in Spider Gwen by Robbi Rodriguez, Funny Business offers their patrons a wide selection of comics and paraphernalia.

Displayed on the ceiling are giant Superman cutouts. T-shirts and toys hang from a chain running across the top beam. The register is tucked into the back corner of the modestly sized store, surrounded by walls covered in family photos, drawings, and posters that give the place character.

But the biggest character of all is the owner himself, Joey Samaniego, whose charisma and love for comic books draw people in and back to his store again and again, holding conversations and creating a friendly ambience.

The store is filled not only with comics, but also with his presence, humor and personal stories. He’ll spot kids across the street, pointing them out as regulars. A father and son come in and he buys candy from them, offering the young boy a donut and putting a smile on his face. Long-time customers frequent the shop and greet him with ease and a familiarity cultivated by years of friendship. Joey’s carved himself a place in the lives of many by sharing his interests with others.

Funny Business began in 1984 as a collectibles shop where Joey and his siblings could share their variety of niche interests with others and each other. His sisters liked dolls. His brother and brother-in-law liked baseball cards. Joey liked vinyls and comics.

“Everybody had their thing. As time went, baseball cards died out. Dolls and woodworking, the stuff that my sisters did, died out. And comics … I enjoyed ’em. I’ve always enjoyed this. It’s an escape. I’ve always had stressful jobs, and this was my escape,” the 70-year-old says.

Joey’s store remains as one of the last comic book shops in the area.

“There used to be twelve stores in this valley. There’s only three now. A lot of my friends thought they were going to become billionaires,” he says. Much of the comic book business suffered because of the digital era, according to Joey.

Part of what kept the business going was his inclusion of Japanese comics, or manga, which in the early days, many comic shops didn’t offer. As he pointed at a painting of Japanese animator and director Hayao Miyazaki’s early film, Nausicaä, with the face of his daughter etched into the clouds.

“She was into Nausicaä in 1984. This is what got me into Japanimation,” Joey explains. “Anime is great. I’m into the old stuff. I’ve been to Ghibli Studios in Tokyo, y’know. And I’m into old Miyazaki stuff. Stuff like that. I’ve been to foreign movies like Akira Kurasawa stuff, and stuff like that. Old. ‘Cause I’m old.”

Funny Business not only holds old school stuff within its confines. Joey makes sure to offer all the latest stuff, displaying them along the widest wall in the store. Customers are able to peruse among brightly colored covers and hold entire universes in their hands.

Michael Gonzalez, 52, who manages a pirate booth at the Renaissance Faire and has been a customer since 2010, says, “He keeps on top of things. He has — he does try to keep all the current stuff in here and he actually really does appeal to a wide audience — a broad audience of comic book collectors.”

As a new customer explores the store, Joey turns to them in greeting.

“I didn’t catch your name.”

“Sean! Okay. Do you need any help Sean?”

Joey’s friendliness and attentiveness to his customers has little to do with sales and more to do with his natural love of conversing and connecting with people.

“I’m not into this for the comics, I’m in this for … I like meeting people,” the man confides.

Funny Business gets all kinds of customers eager to peruse the vast inventory in search of their favorites. Their number one seller? Batman.

“Everybody likes Batman ’cause he’s not a superhero, he’s a human being that does superhero things,” Joey explains.

In the old days, people would buy to collect comics, but nowadays, Joey says most people actually read them.

“Many years ago, I used to tell people, ‘put ’em away safely, and they’ll pay for your child’s education.’ That conversation died in 1991. I know exactly when it died,” he reflects. “Now I just tell people, which are most of the customers: They read ’em. ‘If you’re reading ’em, then you already got your value out of ’em.'”

On Saturdays, Joey leaves the cape at home, opting for a bright blue Superman tee.

Throughout the day, Joey’s customers come in and out of the creaking door, greeting him by name and inquiring about their orders. He provides his customers with preview books so they’re able to get their hands on what they love.

Although there are a handful of kids that visit, most of Joey’s patrons have been coming to the shop for over thirty years. It’s a place for them not only to buy comics, but also to relax and socialize.

“They’re bringing their kids in because this was part of their life. And I laugh because … We’re just here to sell comics and talk,” Joey says.

“I had a 28-year-old come in the other day and walks in. He’s 6 feet tall, has a beard, and he says, ‘Do you remember me?’ ‘No, because you were here when you were 12-years-old.’ He has his little child, and in fact he’s the one who built that,” Joey says, pointing at an old Spiderman toy hanging from the ceiling that the customer had put up when he was a kid.

Long-time customer Elizabeth Earle enters the shop, ready to pick up her books Joey has on reserve. She began going to Joey’s shop when the place she usually frequented was closing down and the owners recommended she check out Funny Business.

“Twenty-some years ago,” Joey fills in, causing them both to chuckle.

“I brought my niece and nephew in here and, um, my niece is very into ‘the little pony,’ so she gets that. And, um, I’m never quite sure what my nephew was into,” she says.

“Green Hornet. That’s a TV show from the ’70s. I mean, they had a movie lately but it … stunk. He asked and I looked at him and I was ‘Green Hornet?!'” Joey exclaims.

“I have read all my life, and it’s just something else that I like to read. I like the stories,” she says.

For now, it’s lucky for local comic book fans that the business continues to captivate Joey’s attention and interest. The connections and memories Joey has made throughout the years are the heart of the store and the core reasons he keeps his doors open.