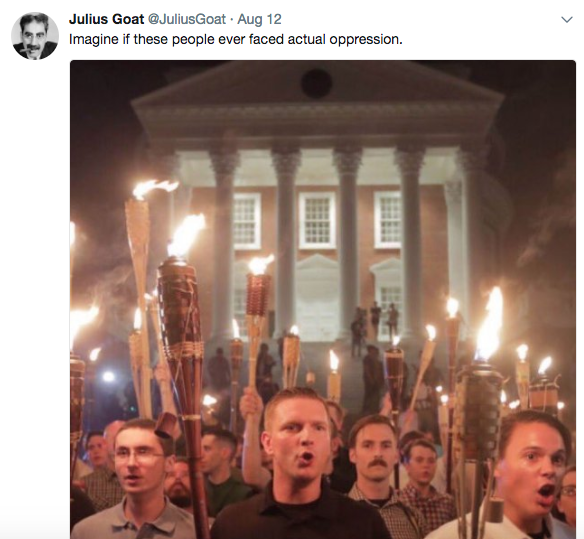 Sadness. Disgust. Anger. This is how I feel about the events in Charlottesville and white supremacy. (No shit. I’m Latina.)

As an editor, I make sure to have my push notifications on from The Washington Post. Try as I might, I miss things. A few weeks ago I was listening to NPR on the drive home and heard there was going to be a protest held in Virginia by a white nationalist group called “Unite The Right.”

Then I got the message from my friend/former co-editor:

I thought this would be another sad, sorry little protest by some crazies like the Westboro Baptist Church who have been met with counter protesters who won’t take their shit. But as I watched the footage via the L.A. Times, the lump in my throat turned into a full-blown crying fit; the ugliest cry I’ve had in awhile.

The hysterical crying that took place in my room Friday night came from a woman who is unapologetically brown and proud. My identity has a huge part to do with who I am and transfers into my personality which results in not keeping my mouth shut when people express bigotry, homophobia and straight up racist remarks, in social media or in person.

As a 28-year-old person of color, I have been hurt over white people’s racism, bigotry, and hatred toward people of color. Black men have been shot by police and their deaths have gone viral, yet the cops who shot them were acquitted. Latino high school students have been grabbed by off duty cops while walking home from school, and when the teen’s peers stepped in, the white officer pulled out his gun and fired it. Racial profiling of Middle Eastern and Southeast Asian individuals who are or are not Muslim but are categorized all as one because of their dark skin and beards or head wear are assaulted and victimized.

The burning crosses and “whites only” signs have been replaced by videos on Facebook recording the deaths and discrimination of people of color at the hands of white individuals. A bilingual man spoke Spanish to his mother in an airport and a veteran in a wheelchair told him to “Shut the fuck up,” called him a Spic, and put his hands on him for speaking Spanish. When I was younger, my mother had a thicker accent. I saw white people lose patience with my mother when she would ask for things at the store and sometimes I had to ask for them myself so that she would not feel embarrassed by English as her second language. They would be very dismissive or give her attitude because they struggled to understand her.

Seeing these white individuals raise their voices and chant such hatred reminded me of how those white people treated my mom. These people could have been part of this outrageous and racist mob in Virginia. All of the anger rushed back and caused my heart to beat faster. It made me see red and hatred for these people who hate anyone who looks or sounds different from them. As a child of immigrants, I have in me the type of anger that comes from watching a parent be discriminated against. This discrimination prepared me to stand up for people who look like me and to be enraged by racism. It turned me into an outspoken individual against discrimination in my teens, and now, a pissed off Latina who doesn’t give a fuck who gets offended when I call out this bullshit.

Must be real nice to sing kumbaya and completely erase people of color’s emotions by ignoring our feelings and chalking it up to political affiliation. A white person I follow posted the meme below. Must be nice to brush it off. Must be… privilege.

The president (not mine) failed to use the word “racism” or “Nazis” or even “white nationalists” when he spoke to the press. Yes, I am pissed off that he could not even bash racists and Nazis. If you are all right with how Trump’s press conference and tweets addressed Charlottesville, then screw you too.

Trump said, “We condemn in the strongest possible terms this egregious display of hatred, bigotry and violence — on many sides, on many sides.”

This means he was also blaming individuals who were enraged by a Nazi white nationalist group and who counter protested their protest. You don’t make these statements, and then add two days later at a conference that your administration thinks racism is evil, and those who cause violence in its name are criminals and thugs, including the K.K.K., neo-Nazis, white supremacists and other hate groups that are repugnant to everything we hold dear as Americans.”

That should have been your initial thought, Trump. How could that not be what your first press conference was about? You had to condemn both sides? There are no two sides to this.

Yes, he was blaming the people who are not racist as well. This is who the president is. He takes no issue with calling the press, who exposes his wrongdoing and keeps him honest, “fake news.” As CNN published, the man whose vicious attacks against Hillary Clinton, John McCain, federal judges, fellow Republican leaders and journalists helped define him both in and out of the White House simply blamed “many sides.”

As the Charlotte story unfolded, I hated everyone who wasn’t up in arms. Everyone posting cat gifs and sharing pictures of their “baes” on their instagrams. Every petty, vague tweet that millennials of color were posting on my Twitter timeline. I hated it all.  I wondered how they could be so complacent when our world is falling apart. And then I took a deep breath and realized that we have to have some relief and escape. I was just as guilty when I posted a selfie squeezed in between woke tweets from people of color and white people calling out Trump and these racists who were marching.

For a second, I hated ANY white individual who was not shaken to the core of the idea that Nazis and racists still very much exist. In those moments, I saw tiki torches that my mother has set up in our back yard for past Hawaiian-themed parties being held by racist, homophobic men, chanting, “We will not be erased” and “White Lives Matter.” I was sick to my stomach and I wanted to scream. I even said to myself, ‘I don’t think I could ever date a white man.’

Progressive white people: You must be outraged. You must be disgusted. But please do not make this about you. Let me explain.

A white woman, Heather Heyer, 32, was killed when a car drove through a group of counter protesters opposing the white nationalist group. Since this tragedy, some white people I know are making themselves out to be victims. Some are presenting a narrative of “let’s bring peace. Stop the violence from both sides.” This is bullshit. If you are a woke and progressive individual, then you need to strongly acknowledge that white nationalism and racism exists in 2017 and not start your posts or responses with “Not all white people are this way.” You must instead accept this responsibility to speak out against the racists. You must let them know they will not take us back to the dark side of history.

Racism and bigotry have been part of the European colonization of the New World from the very beginning. Slavery was the backbone of the economic rise of the colonies and the destruction of indigenous people was justified by the term manifest destiny which allowed the appropriation of lands that didn’t belong white settlers. The Spanish came to California to build missions and convert indigenous people. This accelerated the destruction of native cultures.  Our anger is deep rooted.

So progressive whites, do not fault my people if we are angry with you. Respect what we are going through. Give us your time and your voice against these racist individuals. This is the best way of showing us that you are not like those racist white people.