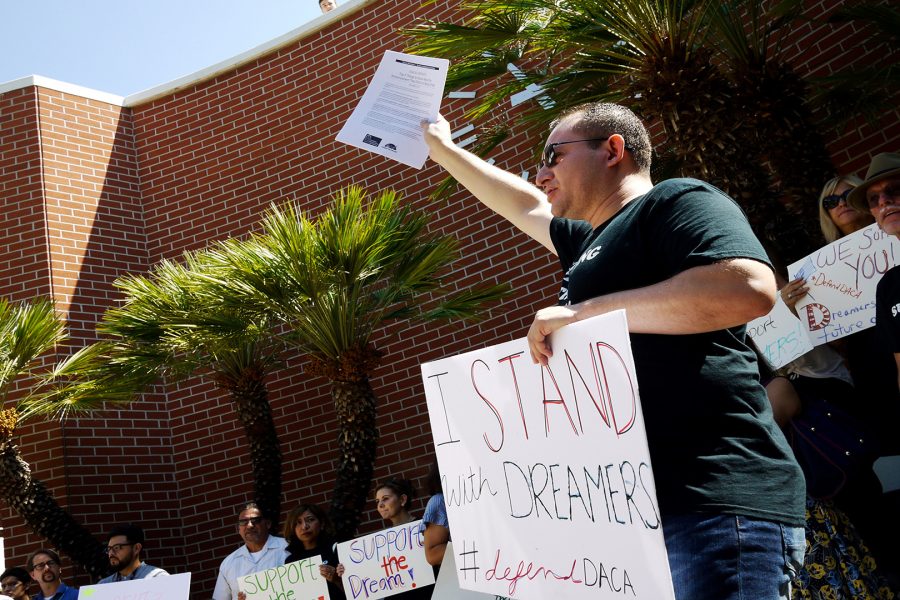 On Tuesday, Sept. 5, Attorney General Jeff Sessions announced that President Donald Trump was rescinding the Deferred Action for Childhood Arrivals program, also known as DACA, started by former President Barack Obama. Immigrants who applied to the DACA program received a two-year renewable protection from deportation if they were brought to the United States as children. As well DACA provided them with the opportunity to apply for a work permit and go to school.

“I have watched students begin to feel more comfortable coming out of the shadows of a society and a system that has not only forced them into silence, but has made their existence in this country criminal,” Tellez said on how DACA benefitted her students. “I have watched students grow; emotionally, socially, educationally, and even politically as they found at least some form of institutional legitimacy in a system that had consistently denied them before.”

Yunuen Bonaparte is a former member of the Mt. SAC student media and a DACA recipient. “Before DACA, I wasn’t able to drive or work legally, and there was always the constant fear that I needed to watch my back because any wrong move [and] I would get deported, or that a family member would get deported,” Bonaparte said. “Despite my many traumas and obstacles, I put myself through school and fell in love with photography. I always knew I wanted to tell stories and photography lend itself to be able to do that, plus, it was a trade job that I knew I could perform with or without papers.”

Even though Bonaparte was able to find a job before DACA the program still changed her life. “With DACA I was able to drive without the fear of having my car taken away, or in the worst-case scenario, being deported,” Bonaparte said. “I also was able to travel abroad to Costa Rica for educational purposes. I spent a week in San Jose and Manuel Antonio doing reporting on the Costa Rican locals.”

Under DACA 95% of the 800,000 recipients were either working or in school. “Many of my undocumented students were ecstatic that they could now hold a job that was legitimate and not ‘under the table,'” Tellez said. “Some of these students still had to worry about family members not eligible to receive DACA, but those that did qualify were guaranteed some safe guard for rightful existence in this country that they consider home.”

Trump’s rescinding of DACA makes it so that no one can apply for the protections granted by the program after Sept. 5, and anyone looking to renew their DACA permits have until Oct. 5, to do so if their permits expire by March 5. As well the Department of Homeland Security will no longer give permission to travel abroad by advance parole.

“Trump is pushing people to live in fear; fear for their lives, of deportation, fear of an insecure future,” Tellez said. “Not only is he creating fear in the undocumented community, but he is feeding into a divide and conquer mechanism that is turning people against one another. Those that advocate for the protections of the undocumented community are more than before facing persecution from Trump allies.”

However, as Bonaparte pointed out DACA recipients will continue to be resilient. “We were okay without DACA before, and will continue to be okay after,” Bonaparte said. “People on DACA were able to contribute so much to the US economy and society. What we did with DACA, they can’t take it away from us now.”

Trump’s decision lead to Obama speaking out against the end of the program he started. “Ultimately, this is about basic decency,” Obama said. “This is about whether we are a people who kick hopeful young strivers out of America, or whether we treat them the way we’d want our own kids to be treated. It’s about who we are as a people – and who we want to be.”

The end of DACA led to protests being planned around the country. On campus English and humanities professors, led by English Professor Gary Enke, organized a demonstration in support of DACA students. The demonstration took place at 11:00 a.m. in front of the building 26 clock tower.

UPDATE: On Tuesday evening President Trump tweeted that if congress did not pass a replacement for DACA in six months that he would revisit the issue.