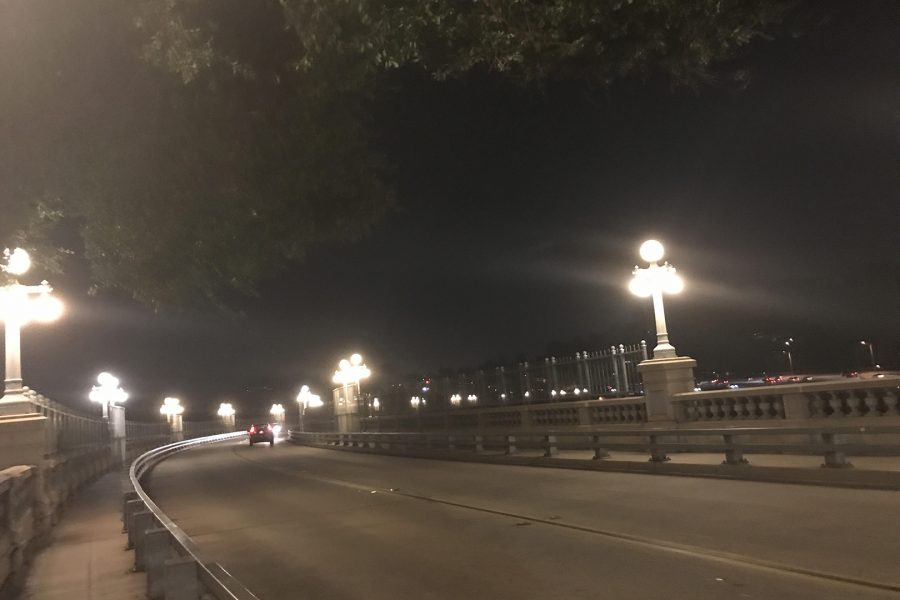 Perhaps it would have been better to go in the daytime hours; for the quality of the photos and to get a better view of just how high the bridge is with the guide of the sun, but also: it was just really creepy during the night.

When in the car and driving through the bridge it is actually quite nice, the sight of the lamps lined and lit all across the structure is a pretty sight. On foot, however, it gives a completely different vibe. We walked slowly at first arrival, and when remembering just what the bridge is most known for locally it suddenly hits you – people have come here to die.

You can sense the unease right at the foot of the steps from the northern side; there is a sign, blue colored and bold lettering that wrote out a message for hope, along with the number of the prevention hotline. There are three signs in total (two of which are scratched up), all at the entrances of the bridge, at both sides. No other messages are found besides these, but there are metal gates keeping anyone from sitting on the stone benches that are a part of the bridge. They were put there recently; a cage to keep people out and away from a seat or step stool, the latter thought comes to mind first. 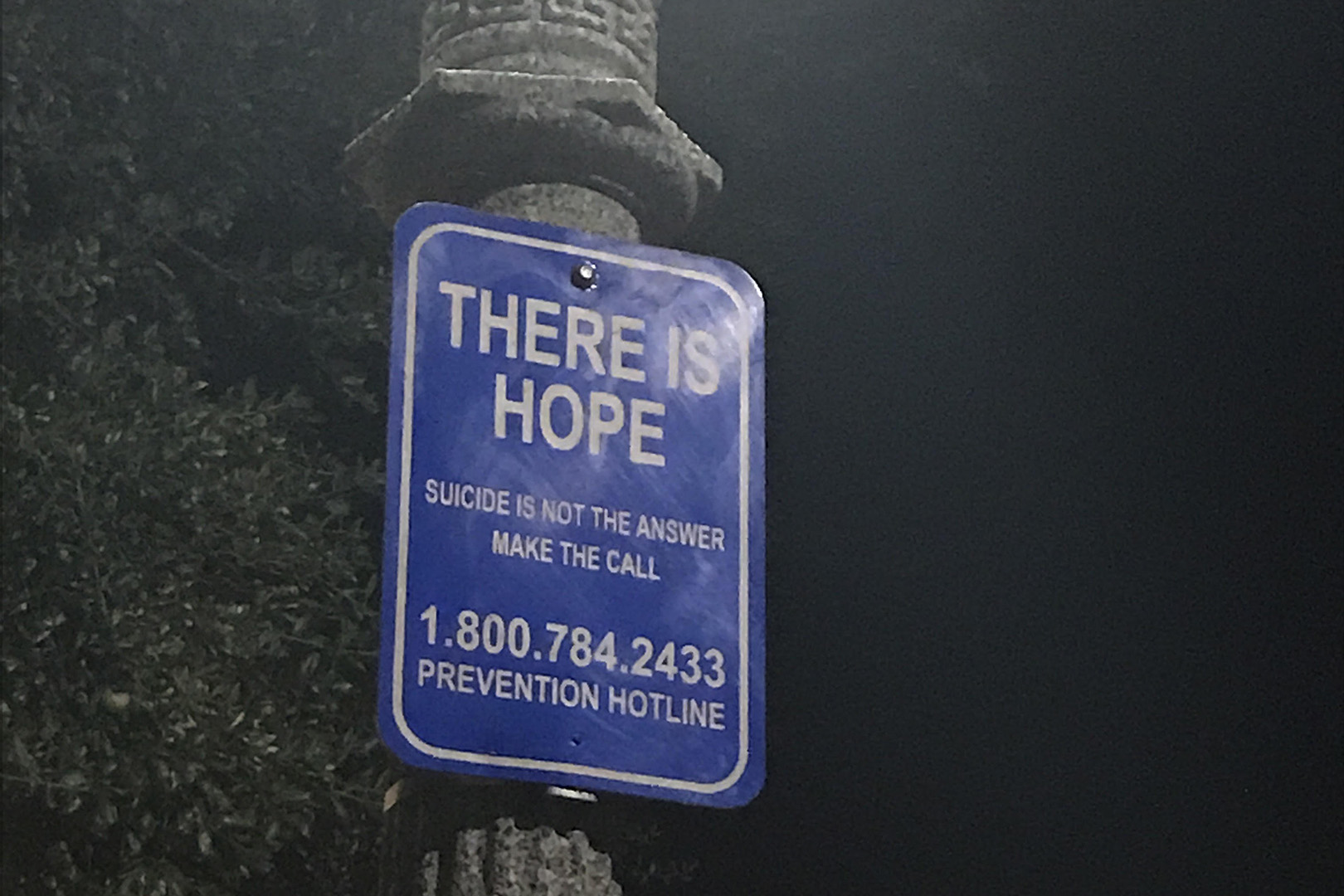 It’s a tourist site, with pretty homes and other expensive buildings on one side while the other is where cars run through a freeway. It’s a memorial structure, along with the plaque of names embedded into a stone wall and the metal statue that honored those lives who either founded the city of Pasadena or served for the country. It’s all located in a small grass area that can serve for a park. And people have jumped off the bridge.

The Colorado Street Bridge was built in 1912, and was completed in 1914. Its eerie reputation came into place before construction even began, when a construction worker accidentally fell 150 feet to the bottom and landed in wet concrete. Supposedly, his corpse is still there to this day.

The first suicides occurred in 1919, and increased during the Great Depression. The most well-known suicide is the death of Myrtle Wade in 1937. She was 22 years old, and had a three year old daughter. She was going through many struggles, such as a failing marriage and losing her job. She took her daughter with her to the bridge one morning, threw her over the edge, and then jumped a few seconds later. Wade died a few hours later in Huntington Hospital, but her daughter survived after her fall was broken by tree branches. The daughter grew up to be happy and successful, and had a family of her own. She does not remember the event, and does not have any psychological issues because of it.

Since then, the Colorado Street Bridge has been called the “Suicide Bridge,” and the most recent death happened on July 2, 2017. This year ranging from a 16-year-old female to a 65-year-old male there have been 6 total deaths. In the beginning of the year, the city of Pasadena made changes to the bridge to minimize suicides by building the metal gates in front of the concrete benches on the bridge. The signs in the entrances that have words of encouragement and the suicide hotline have been there since August 2013, but unfortunately people need a lot more than a phone number to prevent their fall. 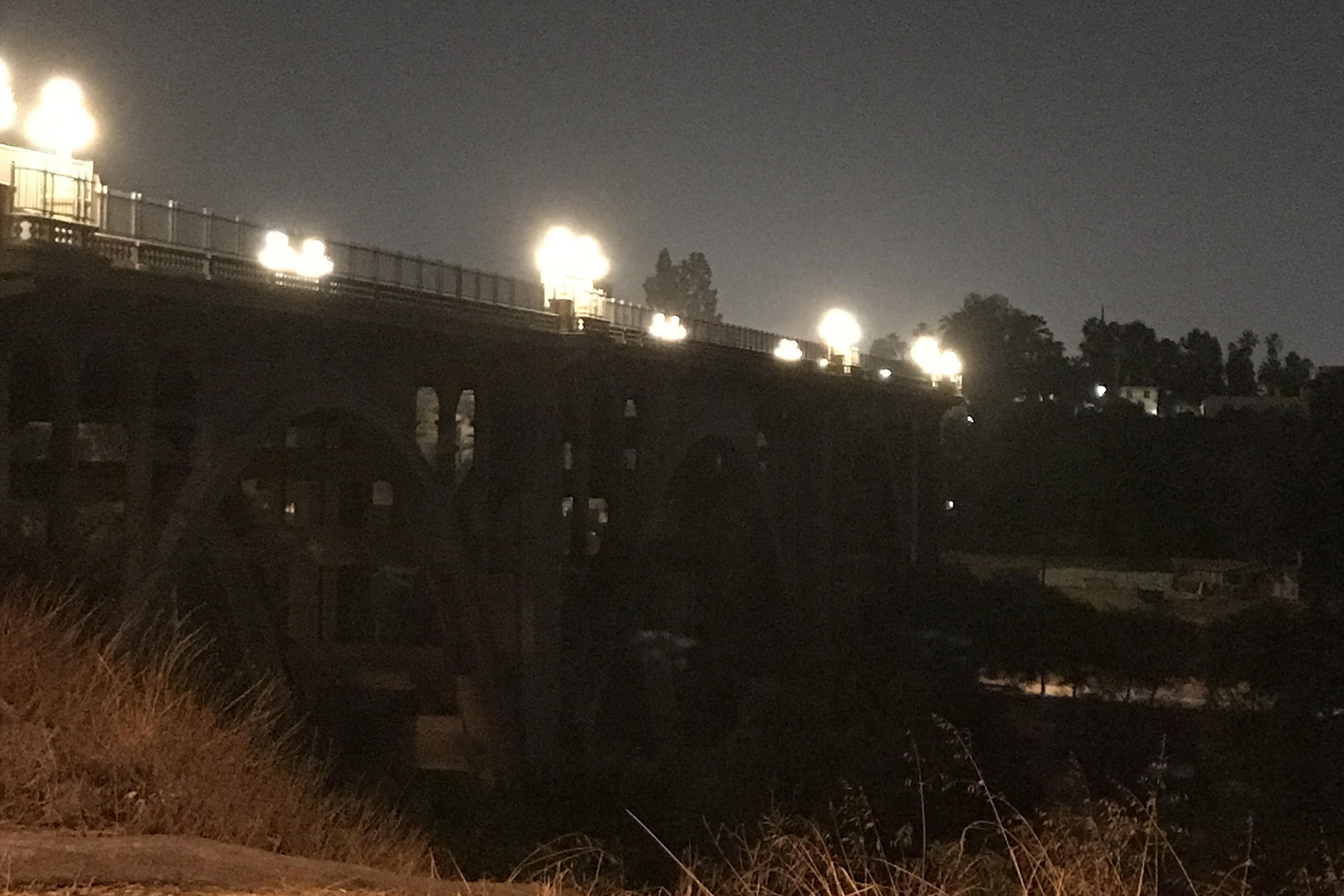 With the suicides, came the ghosts. The construction worker who fell to his death is said to haunt the bridge, telling people above to jump off. Another ghost is a man who wears glasses, and a woman wearing a long, flowing robe. Under the bridge is a man who whispers “her fault” to anyone he comes across; nobody knows who he is referring to. Also, people claim to hear strange sounds, echoes, and screams. An urban legend states that when you are on the bridge and have your eyes closed, you can hear screams coming from below. Homeless people living under the bridge claim they see strange objects, hear strange noises, and animals are said to behave strangely when on or under the bridge.

Words coming from a sign are not as heartfelt coming from another living human being, but they do hold one truth: there is hope. With the hardships one may suffer it is always encouraged for anyone to seek help, for whatever reason, it is important to remind these people that their life is worth so much and death is far from a solution no matter how dire they see their situation. Talk to friends, family, teachers, a professional to – not “fix” all one’s problems – but relieve oneself from some weight to breathe a little easier for another day.