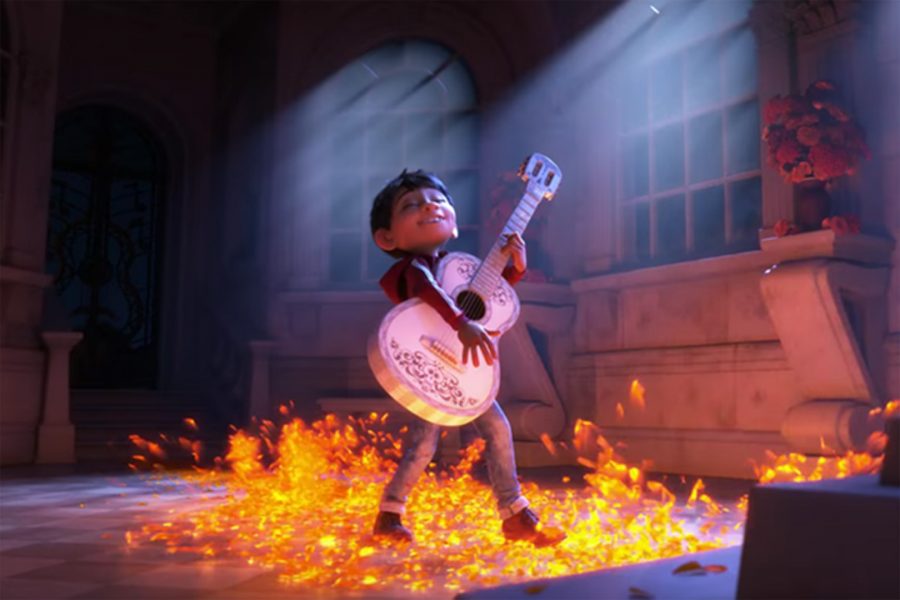 Coco is an amazing movie. I loved it. It’s wonderful and I recommend everyone go see it as soon as you possibly can. I think you’ll really love it. Pixar wins again.

It’s honestly incredibly tempting to just leave it at that, as I really do feel that nothing I can say about it can do it proper justice. Not even calling it the best movie I’ve seen in all of 2017 feels adequate enough. So just keep in mind that no matter what I say about it here, it’s even better than how I say it is.

The film takes place on The Día de Muertos, one of Mexico’s most sacred traditions. In this film’s world, the spirits of the dead can visit the material world on this day, so long as they’re remembered and have a family who are displaying their photo. They can’t be seen by mortals, but they are able to partake in the festivities all the same. That’s a marvelous concept, and it’s very important to the movie in ways I can’t discuss without fully spoiling.

The main character is Miguel Rivera, who loves music despite being from a household where it’s banned due to a member from generations back abandoning the family to pursue a music career. When The Día de Muertos arrives, Miguel decides to enter a music competition, but needs a guitar after his secretly-owned one is destroyed. He’s punished for his desperation driving him to steal the one belonging to the late great musician Ernesto de la Cruz by being spirited away to the afterlife. He hasn’t died at that moment, but he will if he can’t get a family blessing that’ll send him back to the material world.

As this is a Pixar movie, it’s only natural that the animation quality be the best of the best when it comes to CGI films. Mexico looks fantastic, but the true visual splendor is the spirit world. It’s very colorful to show how festive it is on the day that celebrates and honors it, and it’s appropriately dimly colored in non-festive areas.

I haven’t been raised Mexican, but I have heard testimony about how accurate Mexican family life is portrayed. The Rivera household has many members to it, and though they’re not in the movie much apart from Miguel, they’re still very believable characters. The other important one is Coco (the movie’s namesake), whose importance cannot be explained without spoilers. Same goes for Hector, the spirit Miguel travels with to get a family blessing.

To be honest, apart from John Ratzenberger and Cheech Marin, I didn’t recognize anyone from the cast list. Most of them are either of Mexican descent or are fully Mexican, a very nice touch for the movie. I wouldn’t be surprised if some of them have the same role in Mexico’s dub of the movie. All of them gave marvelous performances.

The soundtrack is amazing. It’s got traditional Mexican sounds to it, appropriate for the setting. The songs are all very memorable, too.

As I thought, I still don’t feel like I’ve done this movie justice. I don’t think a film this good can be adequately explained in words. It’s best experienced, so go experience it however you can.