Students Given the Floor as Questions Remain on Racial Profiling Comments 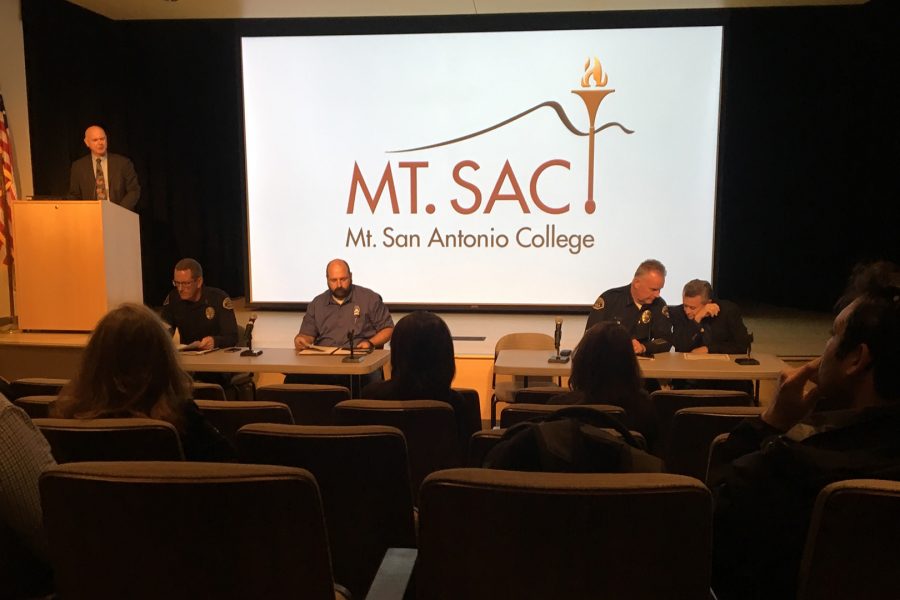 The forum was held during finals week which might account for the half-filled room, most who appeared to be non-students.

During the forum, Scroggins said that any future changes to Board Policy 3525, which currently restricts Public Safety officers to the use of batons and pepper spray, were not set in stone. “There is no foregone conclusion, no anticipated recommendation,” he said.

Responding to a later question on how students could be involved in changes to the policy Scroggins said that public comments could be made at Wednesdays Board of Trustees meeting. “We are the ones who will work with you on if the existing weapons policy, use of force policy, will be changed,” he said. Public comments can be made at any Board of Trustees meeting.

Scroggins said it was better to make a strong argument when asked if there was any “magic number” for a petition to suggest changes to the board policy. “Be eloquent with your statement, that’s more important than numbers,” he said. “The board takes every student voice seriously.”

I will sue to stop the FCC’s illegal rollback of #netneutrality. New Yorkers and all Americans deserve a free and open internet. pic.twitter.com/BNW7TDsp4z

Students writing petitions to make changes to the board policies can also send the petitions to Associated Students who can then pass a resolution that will then brought to the Board of Trustees. The current Associated Students president is Brian Moon. Alternatively, the student trustee, Corey Case, can also bring up petitions up to the Board of Trustees. Moon can be contacted at [email protected] and Case can be contacted at [email protected]

When asked if body cameras were being considered for Police and Campus Safety officers Scroggins said that the topic had not yet been brought up. “It’s not off the table, there’s just other things were focused on in terms of campus safety and technology,” Scroggins said.

Wilson later added that he believed body cameras would be able to help clear issues up in regards to interactions with officers. “When we get there I would be a fan,” Wilson said.

"It's not off the table, there's just other things were focused on in terms of campus safety and technology," President Scroggins said in terms of using body cameras

Alejandro Jaurez, a Mt. SAC student, asked if Deputy Chief Bob Wren had been disciplined for comments he made on racial profiling in an interview with SAC Media.  “I know from 31 years of doing this that [racial profiling] doesn’t exist,” Wren said to SAC Media reporters. “Police brutality is an absolute myth–a complete utter, debunked myth.”

Juarez also said that after a previous town hall on police and campus safety on Nov. 29, he had waited to speak to Wren for 50 minutes when Wren said that he needed to leave and shook several students hands before pausing at Jaurez and told him, “I’ll set you straight.”

Wilson said that he did not have enough facts to comment on Wren’s comment to Jaurez but that Wren was committed to protecting the campus. “There’s no one more committed to protecting that campus, I know what he said ticked you off and I get why,” Wilson said. Wilson then elaborated on what he believes Wren meant during the interview with SAC Media. “[Racial profiling] is not as prevalent as the media has you believe,” Wilson said.

"There's no one more committed to protecting that campus, I know what he said ticked you off and I get why," Chief Wilson said. "[Racial profiling] is not as prevalent as the media has you believe."

Scroggins clarified that Wren had been disciplined as per the college’s policy. “Deputy Chief Wren was disciplined, he did not represent the college, he spoke to the media off message,” he said. “He’ll have the opportunity to grow and learn.”

Scroggins said on acts of discrimination by Police and Campus Safety and Wren’s comments on racial profiling:”Going forward, that will not be acceptable.”

"Deputy Chief Wren was disciplined, he did not represent the college, he spoke to the media off message," President Scroggins said. "He'll have the opportunity to grow and learn."

Scroggins statement was followed by Spanish Professor Manuel Castillejos, who was using his cane to help him stand, who said that he had experienced harassment from Wren.

“This same gentleman, as you can see I can barely walk. I was going to the Associated Students meeting the day that our governor was here so I usually park in front [unintelligible] office because I cannot walk distances. This gentleman came over here and said to me, ‘You cannot park there, we have a very important person coming tonight here so you better get off this place.'” Castillejos said. “I said ‘oh okay, well I don’t know who’s coming but okay I’ll follow instructions.'”

He continued: “That was not enough for him. He had one of his deputies escort me off and so then the deputy escorted me off and made sure that I drove off and then as they escorted me he [makes two thumbs up motion] as if though I was something else, I don’t know, a thief, like a job well done.”

Scroggins said that Wren’s intention couldn’t be known from his actions. “You’re describing behavior to that situation that isn’t overt,” Scroggins said. “Again I’m sure that how you perceived his actions, but you cannot say that’s the way it was intended.”

Castillejos responded to Scroggins: “Once again, you are siding with him. Okay, and if that’s your prerogative, you’re the person who hired him, that’s fine. But I am just telling you that first of all I have never been treated like that, except by you;  you have treated me like that. Not even saying hello to me when I greet you straight in the face. You have never returned my greetings, sir. Never, since you’ve been the president of this college and so these people are doing the same thing; they are treating us the same way. Why, because I’m Mexican?”

Scroggins reiterated his original comment that Castillejos’ perception is his on reality. He added that the point of the forum is to help insure that these types of incidents do not occur.