Mt. SAC and Walnut Still at Odds on Solar Project 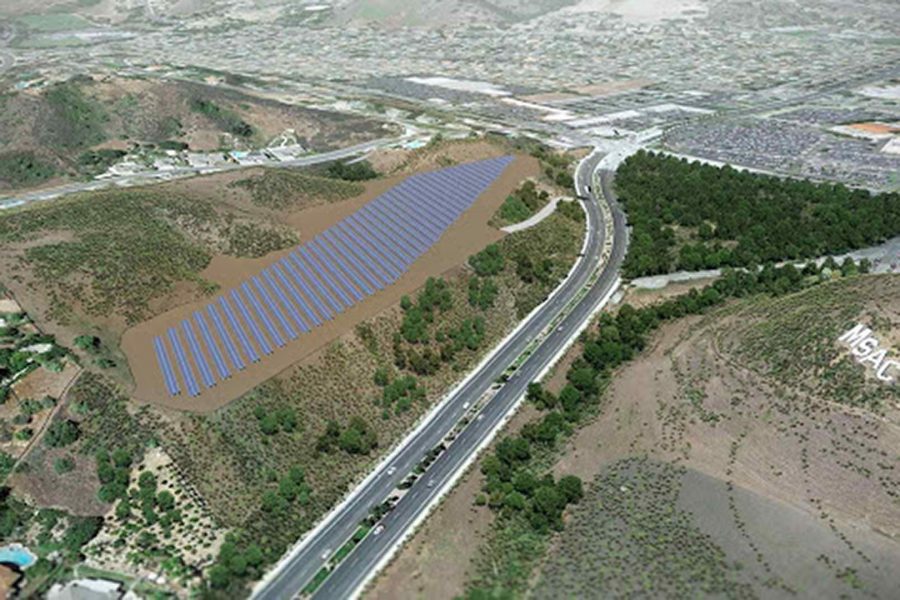 An artist's rendition of the Solar Farm along Grand Ave. Photo from the Mt. SAC website.

“This ground-mounted system will generate two megawatts of electricity for the campus and will save the college a projected $480,000 in energy costs annually,” according to the Mt. SAC website.

The project was delayed when the City of Walnut and the citizen’s group, United Walnut Taxpayers UWT, filed lawsuits against Mt. SAC on multiple causes of action, including failure to comply with the California Environmental Quality Act CEQA. The court sided with Walnut and UWT on the environmental grounds.

A cause of action included in the suit against the Parking Structure contained allegations of Measure RR fund being misused. Scroggins said the school disagrees with this allegation, pointing out that the court did not side with UWT on this cause.

UWT made similar allegations of misuse of Measure RR funds in more recent petition to block construction on the new stadium. A representative of UWT was contacted for this story, but declined to comment on the advice of their attorney because of the ongoing litigation.

The Solar Project does not use funding from Measure RR. It is funded by Proposition 39, the California Clean Energy Jobs Act. This is one of the main reasons the West Parcel was selected as the location for the project.

“There’s no local bond money, local taxpayer money, no state facilities money, so the investment of those resources just makes sense on a piece of land that is separated from the main college,” Scroggins said.

At the direction of the court, Mt. SAC had to redo its Environmental Impact Report EIR to comply with CEQA.

“That case was adjudicated, and all causes of action by United Walnut Taxpayers were dismissed accept the need to redo the EIR on what’s called a ‘project basis’ rather than a ‘programmatic basis,'” Scoggins said.

“The College has gone through the change in the EIR. That was approved by the Board of Trustees in September…the project is now an active project, meeting those requirements set forth by the court,” he added.

Additional disagreements on the project may still be forthcoming.

Robert Pacheco, a Walnut city council member, addressed the Solar Project as if it was not moving forward.

“[Mt. SAC] can’t just build the solar project without complying with the law, and they’ve failed to do that,” said Pacheco. His concerns center primarily on the amount of soil and grading that required to construct the project.

“Can you imagine what 10,000 truckloads of dirt would do to the community?” Pacheco added, “Stalling traffic, dust in the air, especially seniors who have problems with pollution…the environmental impact on traffic, pollution from the trucks, You name it. You’ve got a whole bunch of problems.”

In an article in the San Gabriel Valley Tribune on April 23, City Manager Robert Wishner said after meeting with Scroggins, “I think they believe [the environmental review] is technical in nature. I disagree. They have a significant road ahead of them in terms of environmental work.”

The city is still seeking to block construction. A letter from Barbara Leibold, attorney for the City of Walnut, dated Dec. 13, 2017, stated, “The October 6, 2016, Stop Work notice for the West Parcel site remains in effect due to prior start of construction activities without applicable City approvals.”

On Dec. 12, Scroggins said concerns about the movement of soil, traffic and pollution were addressed in the latest EIR approved by the Board of Trustees.

In addition to opposing the project on environmental grounds, UWT has also voiced concerns over the negative impact on the appearance of the neighborhood, which they fear could lower property values.

“Development of this parcel would also unnecessarily disrupt the visual continuity of naturally vegetated hillsides that continue from Amar Road south along Grand Avenue,” according to the UWT’s Save Walnut website. They suggested the college should install solar panels on existing rooftops and in parking lots instead of the hillside site.

Scroggins said this approach is impractical for the college for a number of reasons.

The power demands of Mt. SAC, which is among the largest community colleges in the country, are considerable.

“Even if we put [solar panels] on every potential rooftop, it wouldn’t be sufficient,” Scroggins said.

In regards to placing them in parking lots, adequate parking is already an issue for the college. Scroggins added, “The cost and the displacement of parking during construction doesn’t yield a satisfactory income.”

An article in the San Gabriel Valley Tribune on Oct. 23, outlined other advantages to ground level solar installations, such as Mt. SAC’s planned project.

In addition to lower costs, placing solar panels on the roofs of existing structures can make maintenance and repairs, both to the buildings and the solar equipment, more difficult. When high winds occur, such as the area’s frequent Santa Ana conditions, the solar panels can become a major safety hazard.

The article also looks at other ground solar projects in the area. It is common for projects such as Mt. SAC’s, which is planned for an undeveloped hillside, to encounter community opposition because people value natural, open spaces.

Scroggins said he sympathizes with people’s concerns over development. He was born and raised in the Los Angeles area, so he has seen and experienced much of the growth and evolution first hand.

“Things change, but as we change, we adapt, and that’s what the college is doing,” he said, and he cited the Mt. SAC’s reputation as an environmentally minded institution.

“In every structure we’ve built with bonds that have been passed over the last decade, has been LEED Certified Silver as environmentally sound,” Scroggins said. “We are one of the most environmentally friendly campuses that is possible.”

Scroggins acknowledged that we all suffer from some impacts of the area’s development and increased population, but the benefits outweigh the costs, and that’s why so many people choose to live in the area.

“I think what we need to do is recognize that the San Gabriel Valley has a higher concentration of colleges and universities than any other metropolitan area in the United States except Boston,” Scroggins said.

“We are a wonderful asset to this region, and one of the reasons people live here,” Scroggins added. “It’s one of the reasons that the college-going rate in Walnut is twice that of any city in the San Gabriel Valley. They come here to Mt. SAC because Mt. SAC is here.”

The Majority Leader’s comments fell far short of the ironclad guarantee I needed to support a stopgap spending bill. I refuse to put the lives of nearly 700,000 young people in the hands of someone who has repeatedly gone back on his word.