Trump’s End to DACA is Cruel and Inhuman 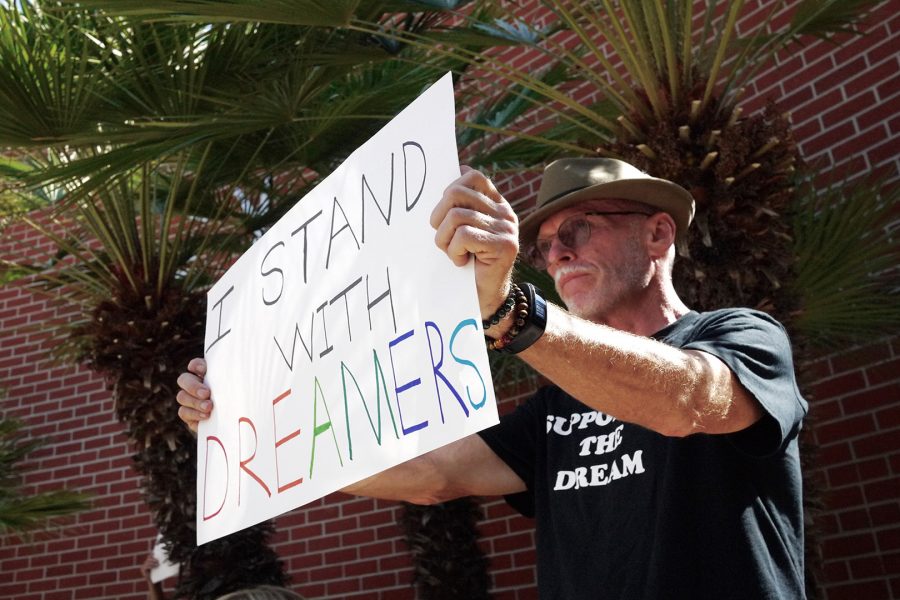 English Professor Gary Enke protests the end of DACA by the Trump administration under the Clock Tower in Building 26 on Sept 28, 2017. Photo by Doug de Wet/SAC Media

Today, Attorney General Jeff Sessions announced the Trump administration’s decision to rescind the Deferred Action for Childhood Arrivals program, also known as DACA. The student media staff is strongly against this decision and stands in support with our more than 2,000 DACA students on campus. The decision to rescind DACA puts more than 800,000 young people at risk of being deported for a crime they didn’t commit.

Of the 800,000 DACA recipients 95 percent are currently in school or working because of the DACA program. DACA allows these young people to live, work and pursue higher learning in the society they were raised in. DACA recipients were brought to the United States as children, not by their own choosing and not responsible for the crimes committed by those that brought them.

Trump’s unwillingness to announce the end of the program himself and passing the fate of DACA recipients to congress shows that he fully understands how inhumane his decision to end the program is. Letting congress try and find a solution is a pathetic attempt to pass the blame onto others.

As home to 2,000 DACA recipients, one percent of the 200,000 in California, the Mt. SAC student media stands with our fellow students who are simply living in the country that they were raised in. In this we are not alone, after the announcement our English and humanities professors, led by Gary Enke, showed their support for students on DACA and organized a demonstration on the same day.

Deporting students who are trying to better themselves through higher education for a crime they are not responsible for and to a country they do not know is completely inhumane.

Members of the student media have been DACA recipients, and those that are not are close friends with many DACA recipients both from school and around southern California. For us DACA recipients are more than just a number among 800,000. They are our classmates, friends and family who we have forged relationships with. We are part of the roots that they have grown and spread throughout their childhood in the United States.

The students here at Mt. SAC and in colleges around the country are more than one among 800,000, they are more than “illegals” or whatever word used to describe them. They are our peers, they are American, and they are human.