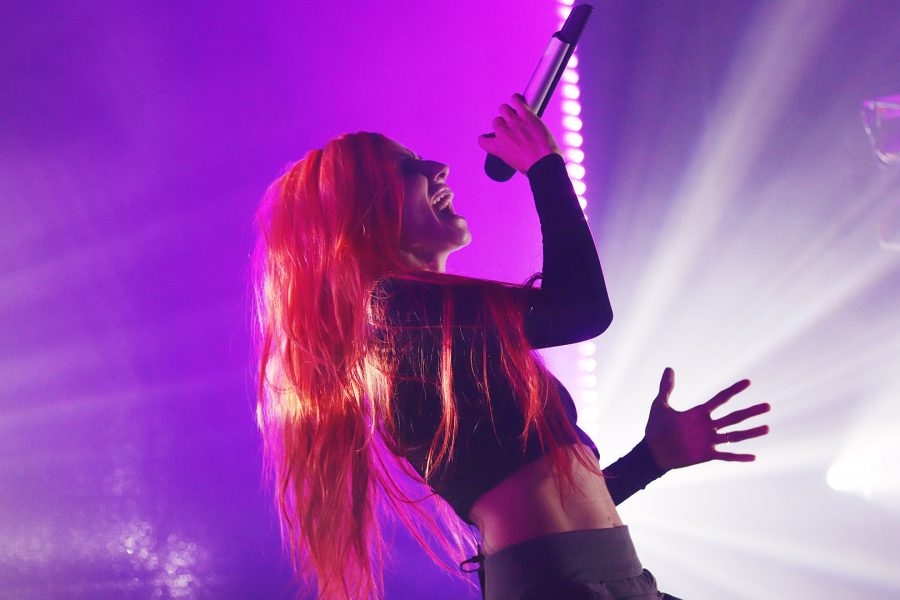 When Lights performs, she fiercely dominates the stage while belting out her songs and whipping around her fiery-red hair. Her energetic stage presence engages the crowd and keeps everyone’s attention on her as she dances and sings across the stage of The Glass House in Pomona on Feb. 10. During her slower songs, when there is less stage production, she shows her vulnerable side and connects with the audience, creating beautiful moment between the artist and her fans. She is an artist in almost every sense of the word and she is definitely someone to pay attention to.

Lights is a Canadian singer, writer, musician, and artist who changed the music game by intertwining comics and music. The name “Lights” originated as a nickname from her last name, Poxleitner, and she legally made it her name. In 2006, she began her musical journey by playing guitar and singing in a metal band and wrote for Sony/ATV Publishing separately. In 2007, she began her own career and has released four albums in the alternative-pop genre since 2009.

In September 2017, Lights released a comic book to go along with her latest album, “Skin & Earth,” adding “comic book creator” to her resume. She wrote the story for the comic first, which helped her create the music. The “Skin & Earth” Comics are about a fictitious character, Enaia, searching for hope in a post-apocalyptic world.

“It’s sort of the origin story of a very powerful woman,” Lights said, “And that origin story is rocky and flawed and ugly at times, and there’s bad decisions, and there’s weaknesses, but that doesn’t mean it doesn’t lead to something empowering, and that was the best part about writing that story for me.”

As self-proclaimed fangirl of the comic book world, she always dreamed of making her own comic and connecting it to music.

“I’ve always just wanted to see it happen with one of the female acts I’ve loved,” Lights said, “I would’ve been so moved and inspired by that, but I never saw it. It just never happened. I think one day, it finally hit me; I am going to do it. I’ve always wanted to see this, why am I waiting around for someone else to do it?”

This was Lights’ first time creating a comic book. Going into the project, she had no idea how to make one. Through tutorials and webinars on Youtube, Lights learned to write, draw, and create the entire comic book herself.

“It has been a labor of love, and so much work,” she said, “Each page of the comic alone takes five to eight hours just to draw.”

Lights’ creativity is ground-breaking. She went above and beyond to make sure “Skin & Earth” was not only a concept album, but a whole world that people can explore. She admits that the hardest part was creating the details that kept her up at night.

“What was really good about the challenging parts was being able to put away something that was challenging and work on another aspect of it,” she said, “That actually made everything really smooth. If I was brought down with the art or the story line, I would move onto music and then that would create ideas for visuals and the story, and vice versa.”

Before “Skin & Earth,” Lights never even considered accompanying her albums with a comic.

“It hadn’t even crossed my mind,” she said. “I think I was still in the stage of hoping someone would do it, that I could be a fan of. I think at the time of the last record, I was actually dealing with writer’s block with ‘Little Machines’ and that was when I became a parent. A lot of things were changing in my life.”

Becoming a parent had a positive effect on her career, because it taught her how to prioritize her time.

On this record, Lights felt that she was able to discuss topics she had never brought up in her previous music, such as sex, anger, and fighting. Since the album is based on the comic, she felt like she could better express herself through this character, Enaia.

“Being able to actually use the character and the storyline of the comics to actually talk about these things is really cool,” she said, “Because I’ve always wanted to say that stuff, but never really felt like I had the outlet.”

She took from her personal experiences in order to make the music for the comics, but that doesn’t mean the topics are relevant to her current life.

“With music in particular, it’s considered very personal, so when you write about something, people immediately connect that to your current life,” Lights said, “So if I were to write a song like ‘Savage,’ which is about a man being an asshole and breaking your heart, which I am not experiencing now, but I have experienced it in the past, people would automatically assume that my marriage is falling apart. So I think there’s that degree of certain topics that you just don’t want people to probe, so you just don’t write about.”

Not only is she a multi-talented artist, but she is also a mother and wife. She has a daughter, Rocket, with husband, Beau Bokan, of the band, Blessthefall. Both Lights and her husband tour, but they manage to balance family life with their unique careers. Their daughter is currently on tour with Lights and they spend quality time together between shows.

“When we do have time, it’s pretty much dedicated to her,” she said. “It’s really nice to be able to keep that balance. I’ve learned as a mother, touring musician, creator, and a writer, there is a thousand things going on in my mind all the time, but it’s all about compartmentalizing the moments that you do have and making sure you have a balance of it.”

She is currently on tour with opening acts, Chase Atlantic and DCF.

“It’s my favorite show we’ve ever put on so far,” she said. “It’s actually the first time I had five visuals as well, so there is such a story to tell with this show, and it’s so dynamic and so intimate, and it means so much to me, and I can sense that with the crowd too. It’s like every step of the way, I feel like we are in it together.”

Lights says she wants to explore other forms of art to accompany her music in the future. Releasing songs is not enough to bring people into the artist’s world.

“I think now is the time to mix media projects,” she said. “Whether it’s comics, or the show, or putting out short films, or putting out paintings, I just think artists need to get creative now and show more of what their vision is than just putting out a bunch of songs.”

As for the future, she still wants to continue to dive into the comic book world.

“I would like to say that this story will continue with or without music, so I don’t know,” she said. “It’s a lot of work and it’s obviously not my first line of work, so whatever I can do on the side, I definitely want to do.”

Lights’ innovative creativity, strong work ethic, and kind personality make her a force to be reckoned with.