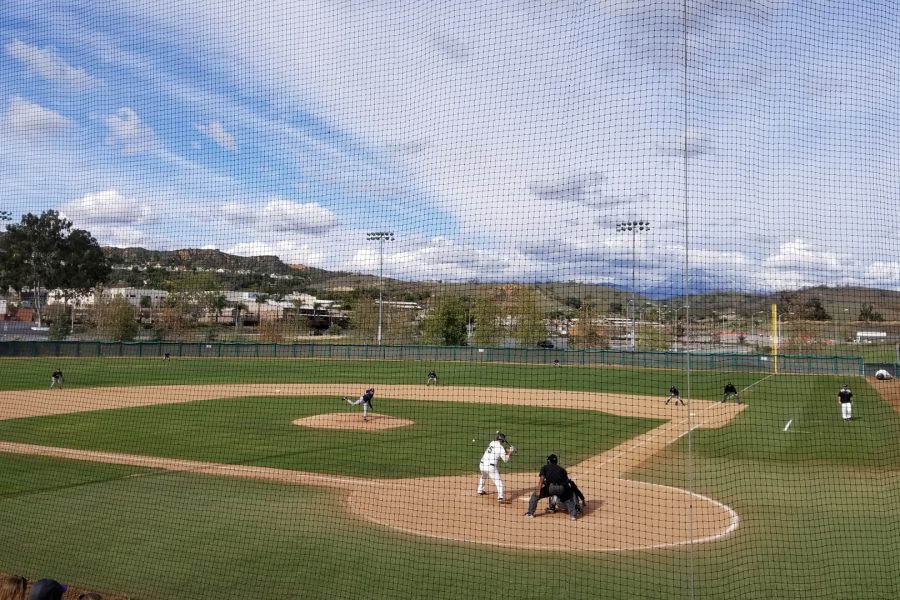 After starting the season with early struggles, Mt. SAC Baseball seems primed and ready to close out the month strong, mounting an impressive five-game winning streak with their 5-3 defeat of the Cerritos College Falcons at home on Saturday, March 17.

The Mounties were coming off a 4-3 win while visiting the Falcons on March 15, where they locked down their defensive play through the last two innings of the game after Cerritos shortstop Ramon Bramasco scored an unearned run in the seventh to bring the Falcons within one.

After holding off Cerritos, Mt. SAC looked to take that momentum back home to Art Mazmanian Field, but the overnight rain left the ballpark under inadequate conditions that risked postponing the game entirely.

However, the Mounties stepped up as a team and worked to prepare the field through the morning and past the originally scheduled noon start time.

“It was a long day today. It rained and our guys were here working on this field at 9 a.m. until we had to push the game back to 2 p.m. and it was barely ready to go then,” Mounties’ head coach John Knott said. “Our players and the coaching staff were the ones getting the field ready and it was a lot of work so I told them before the game the goal is always to show discipline.”

In the bottom of the inning, Elijah Greene opened up the scorecard for the Mounties off a single from Chris Sandberg, leaving Anthony Walters with prime real estate at third base.

Walters then scored with Ryon Knowles’ sacrifice fly towards centerfield to bring Mt. SAC up by two.

Despite the early lead, the Mounties allowed Cerritos to climb back with an error in the top of the second and a fourth inning that saw Bramasco score the tying run.

“We came out, scored two runs in the first and set the tone, but then I thought we sat on our heels,” Knott said. “We had a couple opportunities to advance the lead, but we didn’t do that early.”

In the bottom of the sixth, Mt. SAC reclaimed the lead with Quinn Cotter capitalizing off Greene’s single, but Cerritos’ Gabriel Jaime scoring in the seventh kept the Falcons in the game.

Steven Ordorica came in to pitch for the Mounties in the top of the eighth, striking out Cerritos first baseman Michael Gonzalez, while Mt. SAC’s defense held down the Falcons for the remaining two outs.

From there, the Mounties edged past the Falcons in the bottom of the inning with Cotter scoring off a single from Greene, Elijah Zaragoza finding home plate off a fly from Walters, and Zach Bromstead taking over the mound in the ninth to preserve the 5-3 Mt. SAC victory.

“We took Cerritos down with our bullpen that has been dealing all season and I feel like we’re just going to keep riding that throughout the season,” Bromstead said after the game. “Our starters are getting as many innings as they can, our bats come whenever we need them, and I think with all that, we have the opportunity to do a lot and cruise throughout the rest of the conference.”

With the big win at home, Mt. SAC improved to 7-1 in league play, 17-6 overall, and will set their sights on a three game stand against Pasadena City College, beginning with a 2:30 p.m. matchup at Brookside Park’s Jackie Robinson Memorial Field.

The Mounties currently sit in first place within the South Coast Conference North standings and their match up against third place Pasadena City will mark the first meeting between these two conference rivals this season.

“We’re getting into our side of the conference where momentum can change on a dime and for us it’s just about getting better,” Knott said after the game.

“We want to take this energy of this win into the next game,” Bromstead said. “We’re all gritty players, we’re passionate about what we do and I feel like Pasadena is just another opportunity to play and show what we got.”