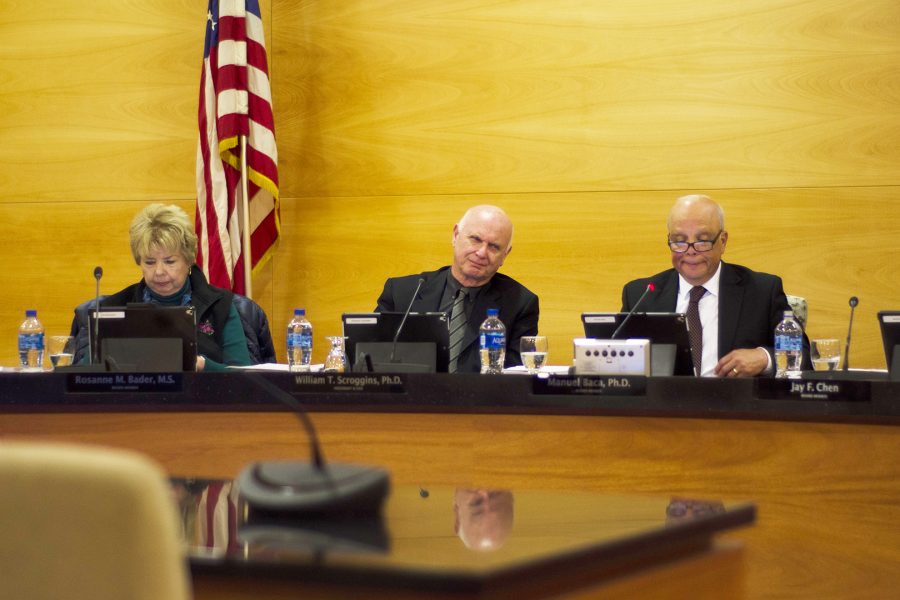 On Wed., March 14, the Board of Trustees met for their monthly meeting where numerous departments updated the board on the events of the past month and addressed the news of Chief of Police David Wilson’s resignation. The meeting took place at 6:30 p.m. in Founder’s Hall.

“This is an opportunity to bring someone to campus who has a depth of understanding of the dynamics of privilege, institutional racism, systemic injustice and the resulting disproportionate impact on communities of color,” Uyeki stated.

Uyeki recalled how she had previously addressed the Board of Trustees following comments made by Robert Wren, Deputy Chief of Police, in an interview with SAC Media. Chisa Uyeki also noted how she has not seen a formal address regarding Wren’s comments.

“There has not been a visible, campus-wide communication to counter these statements,” Uyeki said.

Chisa Uyeki also shared how over the last three months, she has heard from students expressing how they feel less safe following Wren’s comments. Uyeki emphasized the importance of trust between the Public Safety department and students, faculty and staff. Uyeki noted that she shared her concerns given the development of Chief Wilson’s resignation.

“I wanted the Board of Trustees and [President] Scroggins to be aware of these concerns as decisions are being made about leadership in the Campus Police Department,” Uyeki stated.

“We lack confidence in his [ Wren] ability to provide a smooth transition from Chief Wilson to a new chief,” Ramey expressed in the report. Ramey also asked the board to keep the community of Mt. SAC in mind when searching for Chief Wilson’s replacement.

“We would encourage the Board to think of innovative solutions that invoke the concept of community-oriented policing at the beginning of the transition,” Ramey stated in the report. Ramey continued by emphasizing how important it was to find someone who has experience working with community.

“And for a solution that provides for management and operational control to be placed under someone who has implemented community policing on similar campuses,” Ramey said in the report. Ramey concluded the report by explaining that Deputy Chief Wren is a capable officer that does not understand the community of Mt. SAC.

Chris Briggs, a Biology faculty member, also addressed the Board of Trustees regarding Campus Police and Public Relations on campus. Briggs supported comments previously made by Chisa Uyeki and made a suggestion to the Board.

“I would suggest that just because other campuses might choose to arm police members more frequently or use other tactics on campus, doesn’t necessarily make it the best choice,” Briggs stated.

“We encourage the Board of Trustees to seek in both his [Chief Wilson] interim and permanent replacement a leader who has demonstrated skill in listening to employees and students, in creating an environment that addresses the concerns that arise,” Kalijumagi said.

Academic Senate President Martin Jones-Ramey informed the Board of Trustees of the current situation of Dual Enrollment and the program agreement with West Covina School District. In the report, Ramey shared the Senate’s concern for ninth graders taking part in the program.

“9th graders often need stronger foundations for attaining success in college credit classes than their high school peers,” Ramey stated in the report. On the topic of Dual Enrollment, Ramey concluded that Academic Senate will continue to work on the program.

The meeting included the introduction of newly appointed and promoted employees followed by the introduction of the newly tenured professors. The board also recognized the work of Mt. SAC student Paul Flores and his involvement in the Theater Department. According to the meeting agenda, Paul Flores’ “Leviathan was one of three one-act plays selected for presentation at the Kennedy Center American College Theater Festival, Region VIII.”

Associated Students shared how they hosted Join-A-Club week and their plans for their annual Inspiring Women Luncheon taking place on March 27. The deadline to apply for Associated Students Elections for Executive Board is Fri., March 16. Elections will take place during the first week of April.