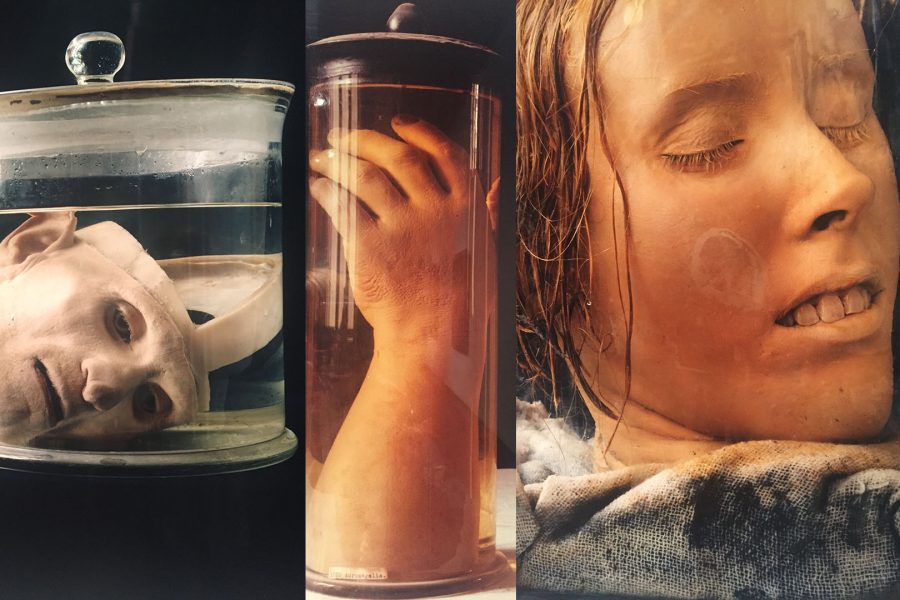 Entering the Begovich Gallery in the Visual Arts complex of California State University of Fullerton, a rush of cool air fills the entrance as I made my way towards a beige wall that said The Dead in bold black letters followed by “The Photography of Jack Burmans.” My first impression was, “This is going to be dark.”

Moving towards the right side of the exhibit it feel as though I was exploring Davy Jones’ Locker in Pirates of the Caribbean as I see the cover photo for the exhibit the image of a cadaver covered in jewels and gold posing on an adorned throne. The pieces St. Alexander – Germany 18th c. and St. Maximus – Germany 18th c. (1) had a Renaissance feel to them. These photographs looked like Renaissance paintings because of their dramatic positioning, and it has the same effect of chiaroscuro in paintings, the contrast of light and dark, which was used a lot in the Renaissance period.

Moving deeper into the exhibit the temperature continues to drop and I find myself staring at three floating heads submerged in beakers of what seems to be formaldehyde, a chemical scientists use to keep human flesh from decomposing. I got the sense I was walking into the laboratory of an evil scientist. Burman’s photography is extremely detailed. In his photo called USA #5, 2003, the picture is so clear that you can even see the clogged pores on this person’s face. On some of the other pictures, you can see the detail in the strands of the rope, and even the imprints that cloth has left on the bones of the skeleton. Also, he fills up the frame with his subjects that allows for more detail to show.

On the other side of the same room, the ruins of the Aztec and Egyptian civilization came to mind when the photographs of mummified bodies filled the walls. The Egyptian Head left the strongest impression with its flesh resembling a human torch after a fire has burned what was left of the body, only leaving a decapitated head. The lighting in the pictures makes it look like Burman adjusted it, but he only used natural light from windows. His work, Egyptian Head, looks like it features Rembrandt lighting, but he achieved that through natural light. It stood next to the portrait of a more graphic photograph with veins and arteries coming out of its cheekbones and neck, Germany #45.

Burman has a way of photographing the dead that makes them look lively. These pictures are essentially human portraits and some of his subjects are positioned in a way that makes it look like they are still alive. In his picture Chachopoya Mummy – Peru 16th c. (2), this skeleton looks petrified. He is crouching and his arm and hand position make him look like he is wailing in agony. Egyptian Head – 800 BC – 200 AD features the head of a preserved body in a way that looks like it is gasping for air. He obviously doesn’t position his subjects, but he has a way of capturing them in such detail that it feels like it’s right in front of you.

The exhibit over all has a dark tone to it. It felt like Edgar Allen Poe’s Cask of Amontillado when the main characters walk into the catacombs of Paris, although the closest resemblance to the catacombs were the photographs of skulls. I immediately sensed a pirate theme. I’m not sure if it was the name of the photographer who’s first name reminded me of Captain Sparrow or the font that was used for the title of the exhibit.

On most of the pieces in the gallery, there are subtle white marks, smudges and scratches that give the photos an eerie feel. These marks probably weren’t intentional because Burman doesn’t even do so much as adjust the lighting to preserve the essence of the subject. Even if it wasn’t intentional, the marks contributed to the eerie feel of the gallery in a complementary way.

Once past the creepiness of death, I understood his interest in the human body and the beauty left behind after a human dies. Burman’s type of work is a very particular taste that might only reach a certain audience that appreciates the darkness of life. I can see how someone interested in the human anatomy, scientific studies, as well as history could see the interesting factors of his photographs especially after hearing the story of each photo. I enjoyed traveling through time with Burman and through the world as I admired his curiosity for the dead.

I highly recommend seeing this gallery. It’s eerie, but interesting. I think most people have some interest in dead, deteriorated bodies. It was interesting to see some of the preserved human pieces because those showed a sense of liveliness. When you look at the art, you know what you’re getting. It isn’t some abstract piece that you have to think critically for. The thing I thought about most while looking around was the background of the subject. I wondered why some bodies were positioned the way they were, how they died, and where were they found or how were they preserved. This is a gallery that you can go to and let your curiosity and wonder roam.

Curated by Jacqueline Bunge, the exhibit features a small cinematic view of Suvan Geer’s What We Saw of It.

The Dead is open to the public at the California State University of Fullerton Nicholas & Lee Begovich Gallery from now through Dec. 7.