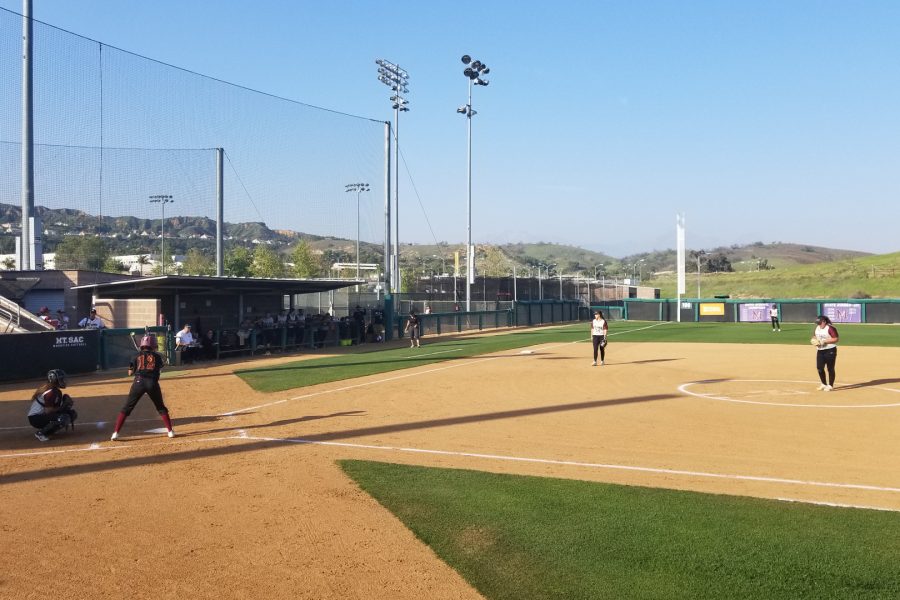 After the powerful offensive performance against the Rio Hondo Roadrunners, the Mounties put on another excellent display versus the Pasadena City College Lancers with a 5-1 victory on Tuesday, April 3.

In the bottom of the fourth, Vicky Gutierrez hit a two-run homer with  Michelle Banales on base, putting Mt. SAC up by two.

Later in the fifth inning, down two runs Pasadena City scored on a Mt. SAC error, but the Mounties struck back at the bottom of the inning when Nikki Soto scored a run on a double by Carissa Felix to centerfield.

Following a scoreless Pasadena City outing at the top of the sixth inning, Ciara Granado hit a bomb towards centerfield, her fourth homer of the season, crushing any hopes of a Lancer comeback.

The Mounties’ hitting streak continued when Michelle Santiago singled and advanced to second on the throw.

Candace Haliburton then advanced to third while Erika Eklund (pinch runner for Santiago) scored the final run ending the game with a 5-1 Mountie win.

Things got heated towards the end of the game when Pasadena City players confronted Adrianna Ramirez on second base about a controversial play involving Haliburton and herself on a safe call by the officials.

“[Mounties’ head coach Rubilena Rojas] told us to stay professional just be who we are, we have Mt. SAC across our names” Gutierrez said.

The Mounties improved their record to 21-4 overall and remain in first place within the South Coast Conference North standings with a 6-1  conference record.

“We have a great group of girls who work hard and the expectations are high here” Rojas said.