A Woman in the Heart of New York 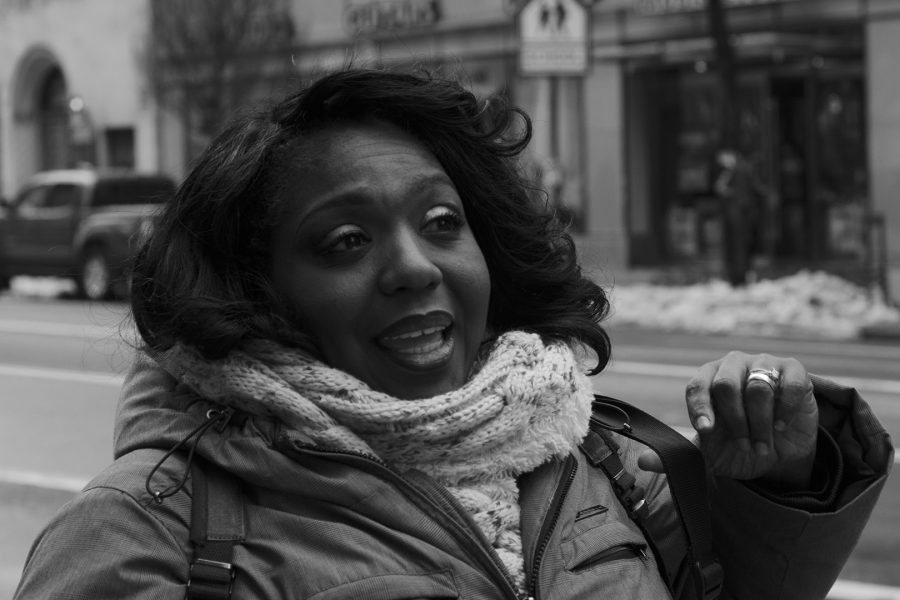 Walking four city blocks through the leftover slush of the past day’s snowstorm to the subway station that will whisk her back to her home in Queens, Gloria Bean shares her life experiences in New York. As she tells her story she keeps a warm smile and a positive attitude that she says helps her get through her workdays. Bean is a 21-year veteran of the Metropolitan Transportation Authority MTA and was working on Sept. 11, 2001

“It was horrible, I was working at 14th Street right next to St. Vincent Hospital and all I remember was the quiet. It’s never quiet here, but that day I could remember more than anything, the quiet,” Bean said of the morning that two planes struck the twin towers.”I had to close the station and when I came upstairs there were no cars moving, no people were talking, just everyone was staring at the World Trade Center and I looked down the block and that’s when I saw the plane sticking out of the building. We just all started crying, that’s what I remember.”

Bean is a mother of two children, 16 and 25, and wife to a now-retired MTA employee who for 38 years cleaned the stations of New York’s subway system. Bean just ended her shift at the 34th Street-Hudson Yards Station and was putting on her large puffy black jacket when she agreed to an interview for International Women’s Day 2018.

Bean is a true New Yorker, born and raised in Brooklyn next to the Brooklyn Bridge, and has raised her family in Queens. She attended LaGuardia College where she majored in business administration. However, 21 years ago when it came to deciding between work as a corrections officer or a station agent with the MTA, she chose to work in the hustle and bustle of New York.

Bean chooses to work at a busy station in the heart of Manhattan rather than a quieter station closer to home.  Despite the quick flow of people through her station Bean is able to make friends with passengers through her job.

At the last station that she worked, Bean met a customer who recently lost his wife and shared his story with her.

“I just tried to be comforting to him and every day he’d come and tell me more about his story, tell me a little more about his wife,” Bean said. “So finally he came up and said ‘thank you so much because you were there for me in my time of need’ so we went to lunch together, him, myself and my husband, and we’ve been friends ever since.”

While Bean keeps a positive spirit, it’s not always pleasant at her job. Bean said that her worst experience was when someone was killed at the station she was working that day. She would not go into further details. Even with living in a diverse city like New York, Bean faces discrimination for being a woman of color. Bean is more than willing to discuss her encounters with customers displeased with her based on her complexion.

“They’ve actually said ‘why are you here’ to me. It’s not as often as you think, and a lot of the time, I brush it off, because I don’t feel like we need to be separated or that there’s a difference. I don’t feel like that, and I don’t teach that to my children, so I think that maybe you’ll have a few people who are not so nice, who are not so kind and you just have to overlook it.”

Despite any of the hardships in the city, Bean still loves working within the pumping veins of the city. “I love that it’s always moving. I love that no matter time of day it is there’s always people out here, there’s always a store open, there’s always something happening,” Bean said. “If I moved to a quiet town, I don’t know if I could survive it. I’m so used to this, the hustle and the bustle. I love it.”

Bean has not been to the 9/11 Memorial since the attacks when she worked in the area. “I can’t go there, after seeing it firsthand and having to return to work in the area. In addition to 14th Street, I was also working down at South Ferry, which is right down the way, and I was working at Rector Street, which is two blocks from there, so having to go back to that area to work was not good, so I never went to the memorial,” Bean said.

While Bean makes many friends working for the MTA, she says that the one time everyone in the city was together was during the Sept. 11 attacks and the days following.

“Even the days after, they were doing the cleanup. There was a lot of smoke, there was just a film over lower Manhattan, and I had to take the train across the bridge and across the bridge. You have to look at where the World Trade Center was at. I’m sitting on the train, and I always sit by the window, and I was looking and just saw the smoke coming out and I just started to cry, and I just cried, right out in the open and when I turned around everyone in the train was crying with me and that was just the one time it felt like all New Yorkers were together.”