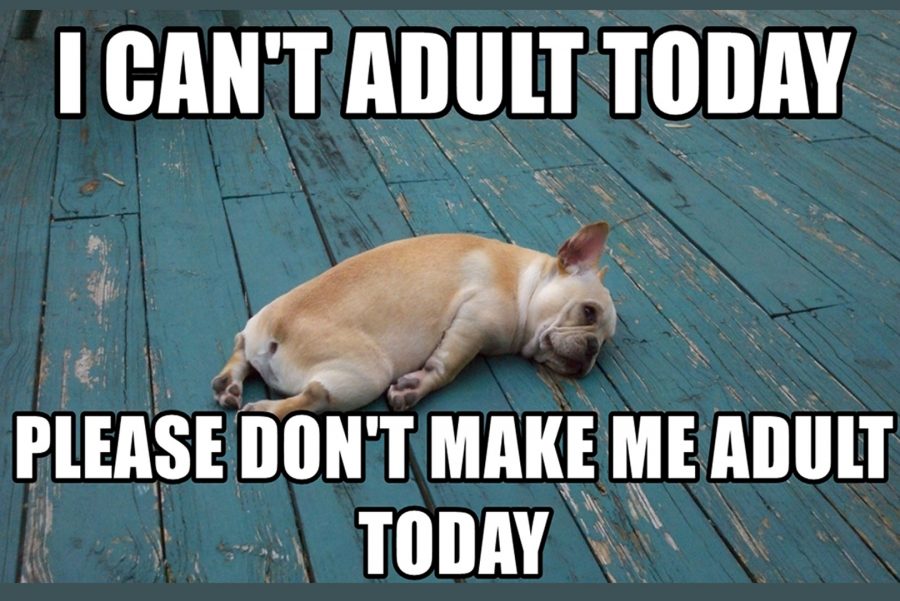 Adult-ing is hard AF, and sometimes I just want to eat pizza with pineapple on it (It’s good) and sleep with my dogs. I’m still in my twenties and have seen people come and go; finishing their studies at school and going on to find a job at my age. It’s a bummer, I’m not going to lie, but when I thought pizza and dogs was the way to go, I met Mercedes Bianca Barba.

When I first met Mercedes, I couldn’t help but smile. She had this warm personality that just drew anyone to her. With that in mind, I decided to find out how she conquered the terrors of adult-ing.3

Facetime was the easiest way to communicate, since she is currently living in the bustling city of New York. Before we got into the nitty gritty talk of being an adult, I met her dog Rita the puggle, and we talked about binge watching, traveling and weather in New York opposed to L.A. After a few laughs, we decided to tackle adult-ing together.

Mercedes said she always loved storytelling and knew she wanted to become a journalist, but she didn’t know how to make a living with it. Like a lot of students, she attended Mt. San Antonio College, took video classes which then led her to video editing. From Mt. SAC she transferred over to Cal State L.A., where she decided to take a documentary class. This is where she made her first 10-minute documentary.

She was bartending at The Other Room in Venice and in Venice is where she found her story. Mercedes lived across the hallway from an author, and one day he had climbed to the top of the three story building and jumped… Les Plesko was pronounced dead. There was no reason to why the author took his life, but Mercedes knew that he was a man that would be remembered. From there she interviewed multiple people asking if they knew Les Plesko.

Within the next two and a half years she found herself on a plane heading to New York for schooling at New York University NYU. Here is where she had to make her 30-minute documentary. She found her story while waiting tables at Fabrick and her coworker introduced her to his boyfriend; a drag queen known as Dusty Rae Bottoms. Dusty Rae Bottoms unveiled her story of how she had come out to her parents and was given an exorcism in return opposed to love.

Watching Mercedes recall memories that shaped her life into what is now, astounded me. But I wanted to know what was the moment that pushed her career? What was the secret ingredient to an amazing success? She smiled and said that if it weren’t for her professor Slyvan Sohowy at NYU, she wouldn’t be where she is now. Slyvan had pushed her to get an internship at CNBC, which lead her to work at NBC which was her dream job. She hated it, but if it weren’t for that moment she would still probably be waiting tables. This really resonated with me, because sometimes I feel like shit when I go onto Facebook and see people I knew in high school getting married or getting promotions in their jobs. It sucks, but to hear Mercedes talk about her life and her experiences gave me some sense of comfort that I could hold onto.

With us talking about experience, I decided to get her opinion on internships. Are they a vital step to landing your dream job? She said yes, but warned me to stay away from unpaid internships. Which was unfortunate for me, because I’d had already taken a few unpaid internships. She said that sadly, an internship usually only hires from within or hires a family member or a friend. Hearing this hurt a little, but she reassured my doubt by saying that there are so many opportunities at Mt. SAC that need to be utilized. When it came to freelancing, she didn’t seem that passionate about it as opposed to interning but did say that it’s something to try if possible.

We then transitioned into the topic of how to deal with stress and how to handle the answer “no” in a work environment. She paused for a moment and thought, then surprisingly said that yoga helps and it is life changing. Now I’m no girl that will do a downward dog on the spot (Downward dog is the only yoga move I know), but she also said that mental health was a big deal. By having a healthy mentality, you are able to overcome someone by saying no. Sometimes by hearing no, it allows you to find another way to tell a story.

It was reassuring to hear that when she was pursuing her career, she never thought she was going to make it. When asked what advice she would give her younger self she said that she would tell herself not to be scared. She realized that she wasn’t ready and that’s why opportunities didn’t come to her. But she couldn’t forget her goals and that’s what drove her to accomplish all of them.

After talking to Mercedes, I realized we all move at our own paces. In order to move forward, not only do you have to stay relevant, but you can’t be so hard on yourselves. We have to realize that we may not have the dream job that we want now, but we are definitely on the right path to getting there.

Mercedes is a true bad-ass and someone that I definitely want to look up to. Keep killing the game and I’ll see you in New York in three years.