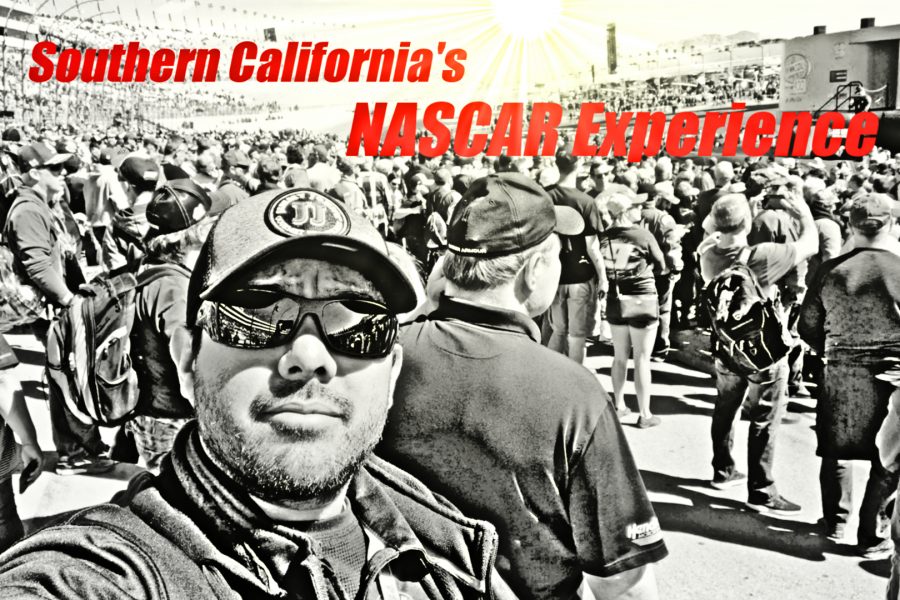 NASCAR wrapped up what it calls the West Coast Swing or three straight weekends of racing in the west coast this past month. The first stop was at Las Vegas Motors Speedway, then ISM Raceway in Phoenix, and lastly Southern California’s own palace of racing, the Auto Club Speedway in Fontana.

I consider myself a hardcore NASCAR fan and have been going to the races in Fontana for the past 16 years. The moment NASCAR roared back to the region, I jumped at the opportunity to catch my sport live and in-person again, while enjoying the festivities that come whenever NASCAR is in town.

For the uninitiated, the National Association for Stock Car Auto Racing, or NASCAR, has three annual touring series that race across the United States, with the Monster Energy NASCAR Cup Series being the biggest. One of the races in that series, Fontana’s Auto Club 400, is a 400 mile, 200 lap race over the speedway’s “D” shaped track.

Being a weekend event, on Friday, one would see the Cup Series practices and qualifiers to set the participants for the race. On Saturday, racers have two practices for their teams to fine-tune and make adjustments to the cars’ performance. Then on Sunday, the big event happens and drivers finally get a chance to race for the prize.

On my first two days at the track, I made my way straight to what is referred to as “pit road” to see the race cars and their drivers up close.  There I caught a glimpse of my favorite driver, 2011 Auto Club 400 winner Kevin Harvick.

But what brings people there isn’t just the opportunity of seeing your favorite drivers. The reason people head to pit road is to “smell the roses” so to speak. You get to see all the race cars, smell the burning fuel of the cars, hear the roar of the engines, see amazing paint schemes, and really get a sense for what makes NASCAR so great. Being right under the 122,000 seats at the Auto Club Speedway really brings  home the fact when these cars get set to go off, this place is going to be roaring.

“NASCAR is not like any other sport. There, you have better chance of getting the autograph of your favorite athlete, get to see behind the scene, you get to walk the track. It is not like baseball, basketball, or football where you can just walk into the field.” NASCAR fan Esmeralda Lopez from Chino Hills said.

“In NASCAR, you can be in the same playing field and interact with the drivers. It is a sport that needs to be experienced hands-on to fully understand the unique experience.”

Finally on Sunday, the big race was here and thousands of race fans made their way to the speedway to enjoy the event’s festivities. Fans were greeted with a pre-race concert headlined by the legendary rock band Bush, but while many flocked to the concert, I was on a mission.

I set up camp next to the main stage three hours prior to the start of when the drivers get introduced to the crowd just so that I could get the best view of the drivers up close and prime real estate to catch autographs. Though I wasn’t able to catch one from Kevin Harvick, I was able to get other autographs, including one from the defending Monster Energy NASCAR Cup Series Champion, Martin Truex Jr.

With the end of introductions, drivers made their way to their race cars and waited for that timeless command given by the grand marshal and heard throughout all races, “Drivers, start your engines.” When those engines start, any NASCAR fan will tell you, the feeling you get is like hearing the roar of a Tyrannosaurus Rex from Jurassic Park a million times over.

The race cars hit the race track following the pace car, which leads them to the green flag. This is 200 laps racing for 400 miles, with cars that go 200 miles per hour, on a speedway with a 2-mile track. You do that math. Once the green flag dropped, they were off!

I was cheering on my favorite driver in Harvick as he moved through the field trying to get the race lead and going for his fourth win in a row, a feat no one has done in 11 years within the Cup Series.

Unfortunately, it wasn’t meant to be though as he crashed 46 laps into the race and ruined not just his day, but mine as well. He finished the race in 35th place, while the defending Cup Series Champion Martin Truex Jr. positioned himself favorably to repeat as champion by taking first place, later celebrating by doing donuts with his car.

Though my favorite driver didn’t get the big win in Fontana, experiencing NASCAR again was as surreal as my first time doing so and definitely something everyone should witness in-person at least once. Until NASCAR returns to the racing palace of Southern California in March 2019, the roar and excitement of the Auto Club 400 is something that’ll stay with me for a long time to come.