Divers Move On To State Championships 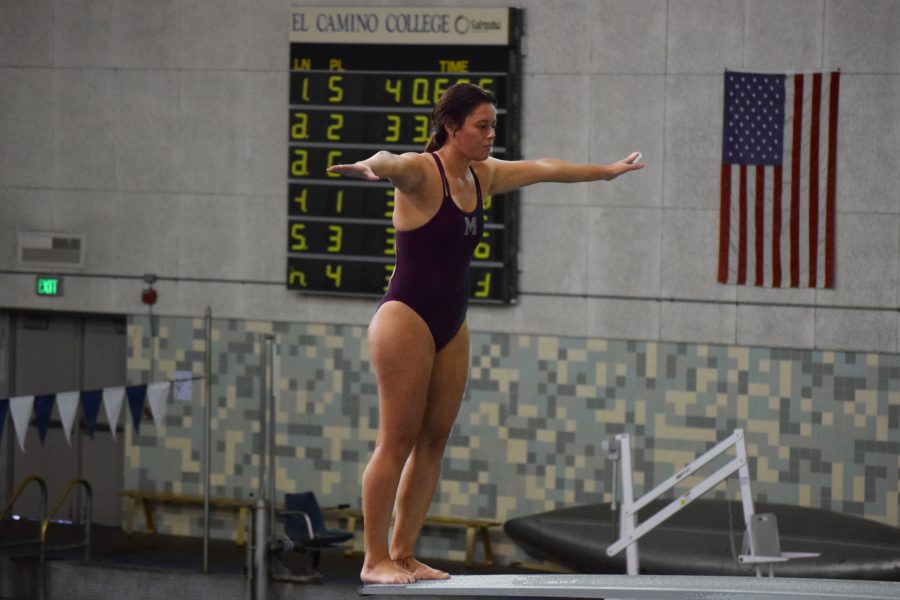 Valerie Villar sets up on the 3-meter board for her back dive on Saturday, April 14 at El Camino College. Photo Credit: Melody Waintal/SAC.Media

Diving competed on Friday, April 13 and Saturday, April 14 for the Regional Diving Championships at El Camino College, where the top eight divers in Southern California on each board moved on to the California Community College Athletic Association State Championships.

Friday was a rough day for the Mounties with none of divers making it to the top eight to compete on the 3-meter board at the state championships.

“Diving is a very mental sport where the diver needs to be completely focused to compete at their maximum potential,” Jaramillo said. “I think on Friday I wasn’t at my max and that cost me state.”

Jaramillo managed to get it together on Saturday, scoring a spot in third place overall and second place for the South Coast Conference with 188.35 on the 1-meter board.

“I feel really happy that I qualified to state,” Jaramillo said. “Now I just have to train harder to make it in the top eight in state.”

Computer science major Zach Justus, 20, also scored a spot in the state championships on Saturday from the 1-meter board, taking fifth place overall and third place for the South Coast Conference with 180.35.

Kinesiology major and first-year diver, Joseph Haddad, 19, said it wasn’t his best performance this weekend scoring second to last on the 1-meter and

“Diving is awesome. It’s not like any other sport in that it’s all a mental game. I hate going for a new dive for that reason,” Haddad said. “But when you finally realize that the pain is only temporary and you go for the dive and hopefully make it, you’re excited. It’s my favorite part. Then you just want to do it it again and that’s when you flop and realize you’re gonna need some practice.”

Psychology major Valerie Villarosa, 23, landed fourth place for the South Coast Conference on the 1-meter board, but came out short on Saturday when she was disqualified for two incorrect dives including her back twist.

“As I came up, I felt really proud of myself and accomplished. I felt like I executed the dive really well. Then, I felt a huge sense of regret when I heard them call out and incomplete dive. I felt like I let down my team and all of my hard work was for nothing,” Villar said. “Thinking back, I could’ve corrected the announcer and got scored, but regardless, I still feel proud of myself for stepping out on that board and facing my fears head on.”

Jaramillo and Justus will move on to the CCCAA State Championships on  Thursday, May 3 at De Anza College in Cupertino, competing against the top community college divers in California.