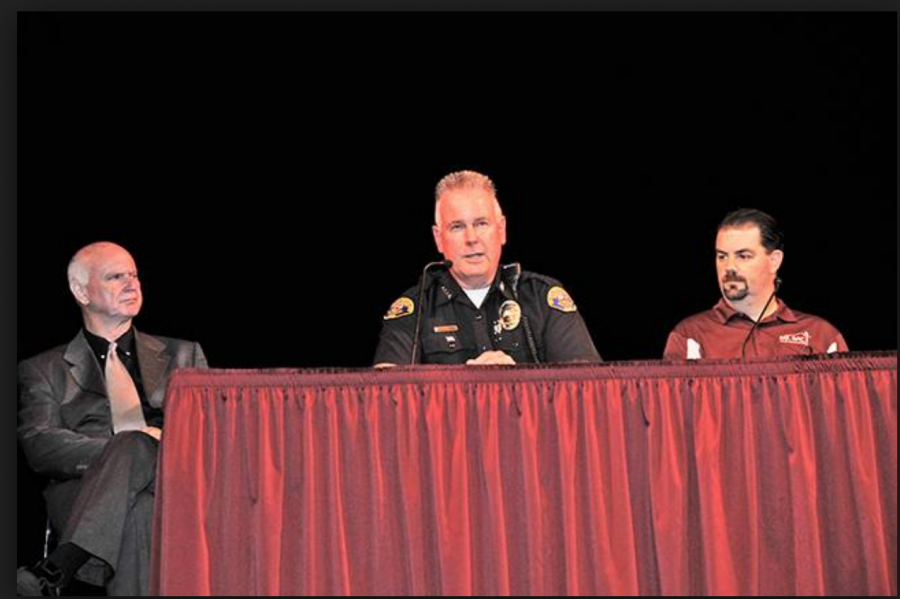 Chief of Police David Wilson, pictured at a Townhall Meeting at Mt. San Antonio College, has announced his resignation, effective May 31, 2018.

“Contractually, I was required to give 90 days’ notice,” Wilson said. His final day acting as chief will be May 31.

Wilson was  hired with the intent to transition the campus public safety department into an armed police force.

“If we were close, I wouldn’t be leaving,” Wilson said during an interview with SAC.Media on March 20 regarding his resignation. “I have been here [for] three years and three months and I thought we would be a lot further along than where we are now.”

He added that there was hesitation coming from students and faculty, and he said that these were part of the reasons as to why it has taken so long to make the change to an armed police force.

There has been no official announcement of Wilson’s resignation, and Wilson himself was unsure of how Mt. SAC plans to announce the fact.

However, Wilson said Deputy Chief Robert Wren would be the most qualified person to replace him as chief, “Based on not only his prior law enforcement experience, but what he’s done here and his passion for keeping this campus safe.”

Academic Senate President Martin Ramey said members of Academic Senate had concerns about Wren becoming Wilson’s successor due to his comments on November 16, 2017.

Wren said he doesn’t believe racial profiling exists, while he was interviewed by SAC.Media last fall. His comments, however, caused an uproar with students and faculty members across campus. The Mt. SAC Board of Trustees voted to reduce his two-year contract with the school to one year because of his statements.

Wilson said no one gave Wren a chance to explain what he meant. Wren was out of the office and unavailable for comment, but the story will be updated when Wren is available to be interviewed.

Wilson said that the way the media portrays police brutality and racial profiling is a myth, and makes people believe it is pervasive.

He said that he and Wren have both worked in Orange County, and added that it is a “diverse community.” According to the 2017 Census, 72.6 percent of their demographic identify as White alone. Included in this percentage are Hispanics who of the 34 percent can also identify as White, Black or African American, Asian, American Indian or two or more races. Hispanics are not considered a race.

Wilson further explained how people will believe anything they read or see and should find out more information before making assumptions.

“[People] need to be more educated about what the entire conversation was because what went out and what was said is incomplete information,” Wilson said, quoting Wren’s comments. “[People] take it as gospel without actually knowing the meaning of the story.”

It is still unclear who will replace Wilson as the Chief of Police and Campus Safety.

As of April 24, President Bill Scroggins said that there are two candidates, one of which was interviewed that morning. He added that Vice President of Administrative Services Mike Gregoryk would be acting as an interim chief if the position was not filled by the time of Wilson’s departure.

According to Mt. SAC’s website, Gregoryk looks over numerous departments, which includes Police and Campus Safety. Students and faculty are concerned that if he takes the temporary position, it would cause a conflict of interest, since Gregoryk would be overseeing both departments.

Stay tuned for updates on who will replace Wilson as Chief of Police.

SAC.Media stated: “Wren made no further response to SAC.Media’s multiple attempts for his side of the story.” Wren was out of the office when SAC.Media attempted to set up an interview. He will be contacted again and the story will be updated at that time.

A sentence was added to clarify the census data: Included in this percentage are Hispanics who of the 34 percent can also identify as White, Black or African American, Asian, American Indian or two or more races. Hispanics are not considered a race.