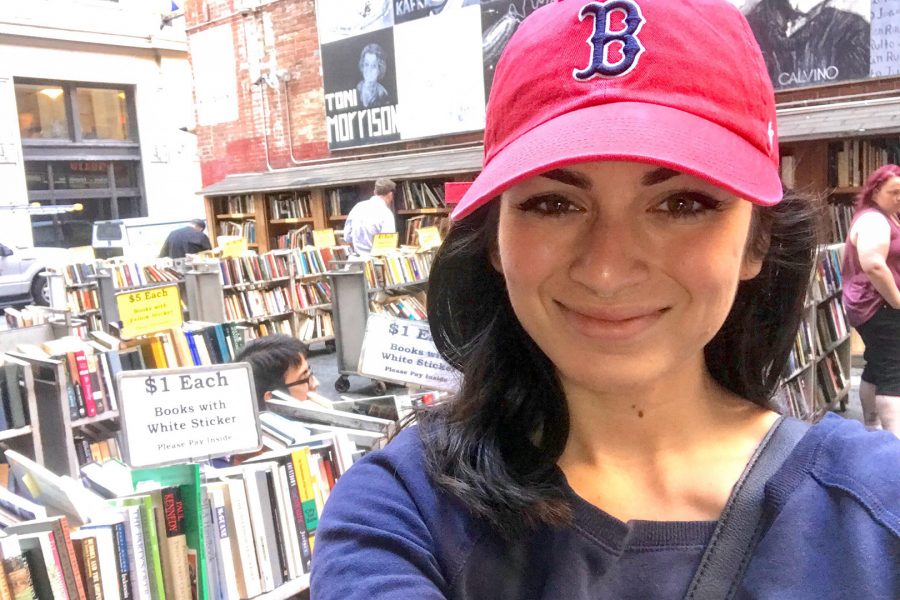 As we work our way through school, we meet the rare, standout students who seem to be good at everything. You know who they are. They’re the one, two or maybe three students in the room who consistently seem to crush assignments, whatever they may be.

Monica Pignotti, 21, public relations major at California State University Fullerton CSUF and graduate of Mt. SAC, is one of those standouts.

To her classmates, it might seem like everything is easy for her. She always seems prepared for whatever is sent her way.

From her chic, perfectly applied eye makeup and red lipstick, to her contributions in class and her assignments, which, when handed back, are remarkably free of handwritten notes, check marks and red ink corrections, everything Pignotti does seems to come up aces.  Her professors often point out her work and cite her work as an example to be followed by the class.

“Monica has the incredible talent of accomplishing any task put in front of her,” Waintal said.

Of course, it’s not that everything is easy for Pignotti, she just makes it look that way.

“I definitely struggle at times. I feel stressed when I have a lot going on,” Pignotti said.

When she starts to feel overwhelmed, she steps back, puts things into perspective and starts working through tasks, one at a time.

“I try to remember that challenges are what helps one become stronger,” Pignotti said. “Once you write down everything you need to do, just put your head down, give it your best shot, and no matter the outcome you will have learned something.”

Pignotti started her education in a Catholic school while living in West Covina. Her family moved to San Dimas when her sister Elsa was born because their place was too small for her growing family.

She then attended San Dimas High School. During this time of adjustment, Pignotti acted in plays and joined the swim team.

During her junior year, financial challenges the Pignotti family to move again. While searching for a more affordable home, they moved in with her grandparents in San Gabriel, California for a short time.

At the time, Pignotti was in the play, “The Crucible,” by Arthur Miller. She played the main character’s wife, which was a big role.

“I learned a lot during that time since we had to commute from my grandparent’s house in San Gabriel, but I ended up learning to adapt more to different situations,” Pignotti said.

Balancing school, work, swim, and a major role in a play was challenging. Even though it was a difficult time, she learned a lot.

She said people tend to stereotype her as a super sweet person who never gets mad or says anything unkind. She agrees most of the time she’s a friendly, happy person, so it was nice to explore a different personality for a while.

“She [the wife] was supposed to be very upset and mad and yell, and it really challenged me to take on that role. I felt like I grew from that,” Pignotti said.

Pignotti gained confidence inhabiting a character with a point of view so different from her own and became comfortable taking on different roles.

While she enjoyed acting, for her, it was a hobby.  Even though she’d been in plays since fourth grade, Pignotti decided to  put acting on hold and focus on school. She wanted to earn a scholarship to ease the financial burden of college.

Pignotti’s journalism professor, Toni Albertson, was happy to have Pignotti as a student.

“Sad to see her go, but I’m proud that I was able to have her as a student,” Albertson said. “She is one of the best and most enthusiastic students I’ve ever met, but even more than that, she’s one of the kindest.”

While Albertson misses Pignotti, there are things Pignotti misses about Mt. SAC too.

“I am a proud Mountie! I really enjoyed going to Mt. SAC,” Pignotti said. “I miss the community and enthusiasm…Mt. SAC is a hub, bringing together people in many different places in their life.”

She especially enjoyed Mt. SAC’s diversity, which she observed through a range of campus programs such as the Honors Program, Arise–which aids Asian and Pacific Islander students–and the journalism program where she was inspired seeing people of many backgrounds working together and taking chances by putting themselves and their ideas out to the public.

She started at CSUF in the fall of 2017, as a public relations major. She is having an excellent experience so far.

When she applied to CSUF, Pignotti was under consideration for a scholarship and admittance into a woman’s leadership program.

“I was not selected for that, however, I soon learned that CSUF offered many opportunities,” she said. Eventually, she was pleasantly surprised to receive two scholarships from the CSUF communications department.

She says the transition to CSUF has been smooth and the classes feel familiar.

“In the communications program, so far, my classes have had a similar vibe to Mt. SAC, except sometimes with more students,” Pignotti said.

Pignotti participated in many extracurricular activities at Mt. SAC, and she continues to seek out special opportunities at CSUF.

“It took some trial and error to find my place in a club/organization,” she said. “I eventually found The Public Relations Student Society of America,” PRSSA.

As a member of PRSSA, Pignotti has grown her network. She’s been introduced to many other PR students, professionals and organizations. She’s also participated in panels, tours and conferences.

“I was able to attend the fall national conference in Boston, and help put together the western regional conference at CSUF while on the sponsorship committee,” she said. “I feel it’s important to involve yourself in extra activities because challenging yourself might unlock some talents or passions you might otherwise never known.”

She advises transfer students to join a professional organization related to their passion and career path.

“This has made all the difference for me, because of the networking and learning from people who love the same thing,” she said.

This semester has brought changes and opportunities. Pignotti lost her job in retail, but then she was hired to do PR for a small business.

“Recently, I was recruited into the Latino PRIME Scholars Program, which was able to help me get an internship with a public relations agency in San Francisco this summer,” Pignotti said.

“My head’s still spinning! But I am super thankful. Also, a collaborative video news story I worked on last year at Mt. SAC, earned 3rd place from the College Media Association,” she added.

“She’s incredibly objective, which makes her a positive person to talk to and work with, and I’m more that certain she’s going to be extremely successful in her career in public relations,” Waintal said.

Pignotti is on a path to graduate from CSUF next spring. After graduation, she looks forward to starting her career.

“I want to begin doing public relations for a company or non-profit,” Pignotti said. “My dream job would be leading a team in creating fun and successful campaigns for our clients. We’ll have to see!”