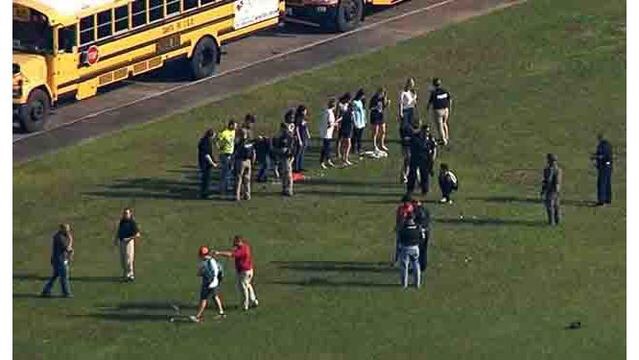 Law enforcement officials have confirmed the identity of the suspect. They also announced that the suspect has been officially charged.

Santa Fe Independent School District Superintendent of schools has issued a statement about the shooting.

Texas Governor Greg Abbott and local officials held a press conference to provide an update of the school shooting. Abbott thanked the first responders for their response to what he called “the worst disaster to ever strike this community.”

“It is impossible to describe the magnitude of the evil of someone who would attack innocent children in a school,” Abbott said.

Abbott confirmed that 10 people were killed and 10 injured in the shooting. Abbott said that more needs to be done.

“We need to do more than just pray for the victims and their families,” Abbott said. “It’s time, in Texas, that we take action to step up and make sure this tragedy is never repeated ever again in the history of  the state of Texas.”

Abbott said he will immediately begin to work with members of the Texas legislature and other representatives to begin roundtable discussions starting next week. He said that they will begin to work on “swift solutions to prevent tragedies like this from happening again.”

According to Abbott, different types of explosives have been found in a home and a vehicle. Abbott also said the suspect had journals where he wrote about the shooting and his wish of committing suicide after the shooting.

Abbott added that two additional people have been detained as people of interest. The suspect used two weapons, a  shotgun and a .38- revolver. The suspect’s father is the legal owner of the weapons.

Abbott did not name the suspect but CBS News identified the suspect as Dimitri Pagourtzis, 17.

Abbott added that there were no warning signs with the suspect compared to other suspects in past school shootings.

A middle-aged female victim is also in surgery being treated for a gunshot wound to the leg.  Dr. Marshall said that the victim’s husband took his wife from the scene to a local hospital. The victim was later transported to UTMB.

The male victim who is under 18 is still at the hospital and on the pediatric floor. The victim had a gunshot wound to the leg.

Dr. Marshall said that the situation “hurts” and called it “a terrible tragedy.”

Officials confirmed one suspect is in custody and one person of interest has been detained.

They also confirmed that there were “multiple fatalities believed to be fewer than 10 at this time.”

Santa Fe Independent School District ISD tweeted that possible explosive devices have been found at the high school and off campus.

#UPDATE Possible explosive devices have been located at the school and off campus. Law enforcement is in the process of rendering them safe. School has been evacuated. Call 911 if you see any suspicious item. #HouNews #SantaFeISD

President Trump held a press conference to speak about the shooting following his earlier tweets.

“We grieve for the terrible loss of life and send our support and love to everyone affected by this absolutely horrific attack,” Trump said. He also “[It is] a very sad day.”

Pres. Trump on Texas school shooting: "My administration is determined to do everything in our power to protect our students, secure our schools, and to keep weapons out of the hands of those who pose a threat to themselves and to others." https://t.co/C6fyaygu1i pic.twitter.com/77Z4k7y5S9

Sheriff Ed Gonzalez held a press conference outside of Santa Fe High School to provide an update on the situation.

Gonzalez said that the timeline of the situation is preliminary.  The shooting is believed to have began prior to 8 a.m. CST. He also provided an update on the victims

“The number varies, but there can be a number between eight to 10 fatalities at the school, including students and some adult staff as well,” Gonzales said. He also said that he was told that students were the majority of the injured.

The suspects that have been detained are believed to be students. Sheriff Gonzales also said that the type of weapon that was used is unknown.

On Friday, May 18 officers responded to an active shooter at Santa Fe High School in Santa Fe Springs, Texas.  Law enforcement officials confirmed eight people were killed in the shooting. It was not specified if the victims were students or teachers.

Three victims have been transported to The University of Texas Medical Branch UTMB. In a press conference, hospital officials said that they were treating three patients: two adults and one person under the age of 18.

A Harris County Sheriff’s officer tweeted an update on the situation.

One is in custody, a second one detained. An injured police officer is being treated, the extent of his injuries are unknown.

President Donald Trump tweeted his thoughts on the shooting.

To the students, families, teachers of Santa Fe High School, all of those affected and the entire community: We are with you, you are in our prayers, and you're in the prayers of the American people. pic.twitter.com/8bhPWyK7vR

The Harris County Sheriff’s Office HCSO is the largest sheriff’s office in Texas and responded to the active shooter situation.

We are assisting @SantaFeISD with a multiple-casualty incident at Santa Fe High School. This is no longer an active shooting situation and the injured are being treated. #hounews pic.twitter.com/m7Wuauk9jk

The Santa Fe Independent School District ISD released a statement on their official Facebook page. The post included details of the situation and plans for how parents could contact their children.

“The situation is active, but has been contained.  There have been confirmed injuries.”