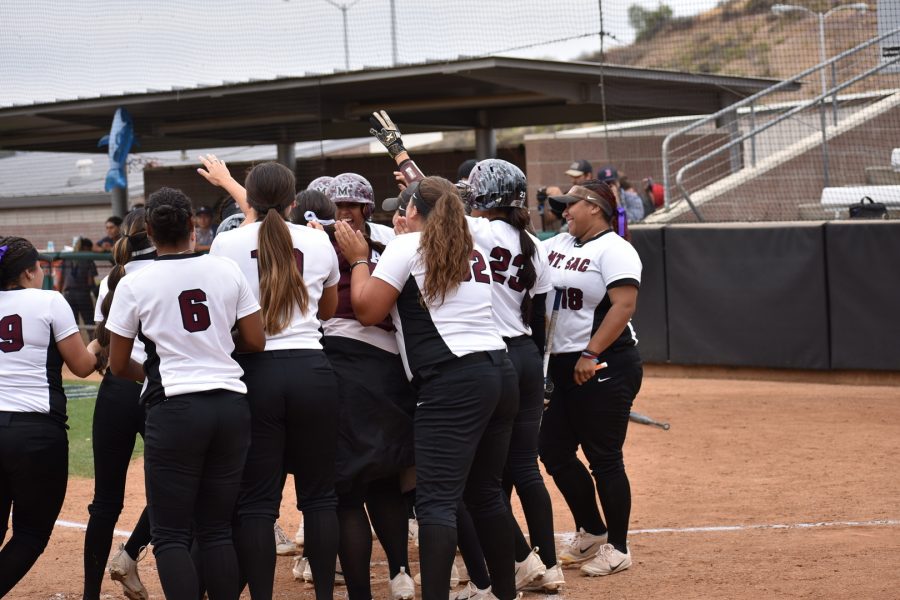 With the California Community College Athletic Association State Championships in full swing, Mt. SAC Softball obliterated the El Camino College Warriors with a 10-3 win at home on Friday, May 18.

After edging past the opening game, the Mounties looked to start things off with a bang against the Warriors from the first inning.

With Briana Wheeler on the mound for the Mounties, El Camino struggled to get anything past Mt. SAC’s defense early on, leaving the Mounties primed to capitalize at-bat.

Carissa Felix singled in the bottom of the first to centerfield, advancing to second base after Caitlyn Felina grounded out. This led to Ciara Granado getting walked, before Michelle Banales singled through the left side and loaded the bases.

After hitting just her first home run of the season in the previous game, Michelle Santiago blasted off another for a massive grand slam that put the Mounties up 4-0.

“It’s honestly just a very surreal moment,” Santiago said. “The one thing I love is running home to all my teammates because they’re loud and proud. It felt really good.”

After setting the pace of the game and forcing a pitching change on the visitors, with Ma’Kylah Smith replacing Clarissa Chiquete, the Warriors were on the ropes but kept trading blows with the Mounties.

In the fourth, with one out and Warriors on second and third, Ashley Machado doubled to right center, scoring two runs for El Camino and cutting into Mt. SAC’s lead.

After getting two quick outs, the Mounties were eager to answer back in the bottom of the inning.

Felix smashed a single to score in Nikki Soto as Adriana Ramirez advanced to third. Ramirez then scored on a sacrifice fly from Granado to extend Mt. SAC’s lead, 6-2.

El Camino was able to get on the board once again in the fifth when Karla Calderon singled to left field, bringing in Alyssa Wing to score, but an error from the Warriors in the bottom of the inning with two outs allowed Candace Haliburton to reach home and add to Mt. SAC’s lead.

After three quick outs in the top of the sixth, the Mounties had an opportunity to add to their lead and put the Warriors away in the bottom of the inning.

Santiago singled to shortstop, allowing Banales to advance to second before being replaced by Sasha Allen as a pinch runner. From there, Haliburton doubled down the right field line, moving Santiago to third and scoring Allen for an 8-3 lead.

Vicky Gutierrez then singled up the middle to bring Santiago home and move Haliburton to third. Soto followed that up with a single of her own to score Haliburton and put the Mounties up 10-3 heading into the seventh inning.

That set up Wheeler to go to work on El Camino, finishing the game with six strikeouts, as the Mounties secured the victory and positioned themselves to be just one win away from the CCCAA State Championship Final.

“I have no doubt in my mind that we got this all the way,” Soto said after the game. “We’re ready, we’re hungry; that’s our motto.”

With the victory, the Mounties advance to a semi-final matchup versus the Palomar College Comets on Saturday, May 19, with first pitch at 3 p.m.

“We’re out here for one goal, and one goal only,” Mounties head coach Rubilena Rojas said. “It’s our year.”