Decathlon Champion Finds Strength Through Faith And Being A Mountie 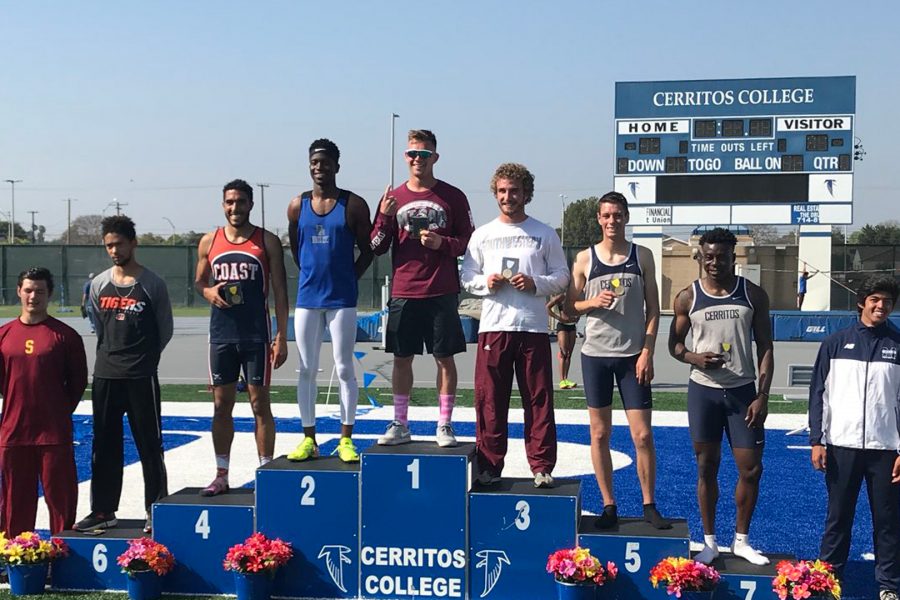 With one event left in the Southern California Multi Championships decathlon at Cerritos College on Wednesday, April 4, Kyle Beck had given his all in the previous nine, enough to put him 20 seconds away from victory.

That was the amount of time he needed to beat to knock San Bernardino Valley College’s Derrick Affor off the top spot on the leaderboard.

Though 20 seconds may not seem like much, it is an eternity in track and field, which meant the odds were stacked against Beck.

However, this wasn’t the time for excuses. Beck pushed through the pain of finishing the race and now waited to see if it had all been worth it.

Ten minutes later, the results were in.

Ultimately, Beck finished with a time of 4 minutes, 41.76 seconds, decisively earning him first place in the decathlon.

Not too many people find success in decathlons as quickly as Beck did, as the SoCal Championships were only his second time competing in a ten-event competition.

Despite being a pole vaulter all his life, Beck had been struggling with being able to focus on his athletics before his coaches decided to throw him into a
decathlon with no prior training for it.

“I didn’t even know really what caused it … it was just a matter of getting myself to believe in myself and what I can do,” he said of his mental struggles.

Despite Beck’s doubts in himself, his coaches had no doubt he would succeed. Their confidence in him replenished his own, which he believes pushed him to rise above his challenges.

“Mt. SAC Track & Field has the best coaches in the world. [Head coach Ron Kamaka] is amazing; he’s good at motivating and getting you to feel good about yourself.” Beck said. “And then pole vault coach Giovanni Lanaro … he’s there always motivating, always the guy believing in me and that helps a lot.”

Beck’s journey towards competing in a decathlon began when he first tried out for track in the seventh grade, wanting to run the 4×4.

However, he found himself competing with a high school student in his first run, resulting in him loathing distance running due to being unable to keep up with his competition.

After feeling discouraged from the result of his first experience, Beck was approached by a friend who encouraged him to try pole vaulting instead and immediately fell in love with it.

It was a rainy day, but pretty fun…things are starting to turn around

“You just get this rush of adrenaline,” Beck said on what he loves about pole vaulting. As an adrenaline junkie, he compares that rush to when he surfs.

It was here that he started taking the idea of competing in track and field at the collegiate level seriously, overcoming his previous reservations about distance running.

However, whatever plans he had for his athletic future would have to be put on hold, as Beck would embark an a different kind of journey after graduating high school.

Faith had always been at the center of Beck’s upbringing. As a devout Mormon, he decided to embark on a two-year mission to Ecuador, during which he grew closer to his faith and strengthened his relationship with Jesus Christ.

“[Faith] has helped me shape a lot of who I am and why I am the way that I am,” he said. “I’ve definitely been blessed to have a good life; I didn’t really have any worries growing up.”

As the middle child of five, he took the concept of sibling rivalry beyond just playing video games and competed with them athletically as well.

“It was fun, definitely a lot of good memories, a lot of angry memories too but that’s just what brothers do,” Beck said.

Sometimes in life we are compelled to be humble based off the decisions we make. I am grateful to be surrounded by so many amazing people who have helped me continue to be who I'm meant to be.

While he has received interest from a few four-year universities, Beck is weighing options between Cal State Fullerton and Brigham Young University.

He is intrigued by BYU because of their ties to the Church of Jesus Christ of Latter-day Saints, while considering Cal State Fullerton’s computer science program, a field he currently majors in at Mt. SAC.

Although he’s currently undecided on his career path, his goal is simply to provide for his family.

In his journey that lies ahead, Kyle believes through his faith and the tools earned as a Mountie, there is nothing he can’t achieve.