Got a Story? Careful Who You Tell it To 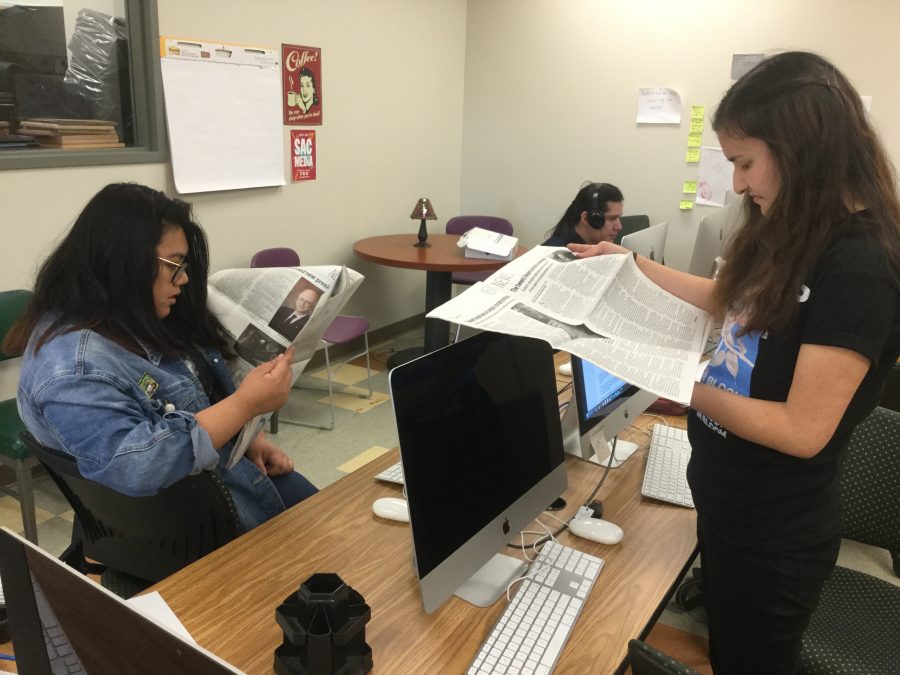 A publication called “Newsroom” has come out of Mt. SAC, but unlike its name, it is not produced by the student newsroom, a name that has been synonymous with student-produced publications that are independent from the college.

Instead, this “Newsroom” digital publication is produced by the marketing department and it has caused a constant flow of confusion.

Mt. SAC’s marketing department launched “Newsroom” and has been posting stories since early January 2017. The problem is not only that they publish only positive public-relations style news about the campus, but that the name has created confusion as to whether it is unbiased journalism produced by the students or a publication that is one-sided publicity for the college.

Mt. SAC has its own student media that is independent of the college, but the students publish journalistic stories, which can be both positive and negative, but most importantly, true.

This is how it all started: Jessica Fuller, a part-time counselor and project coordinator for the journalism program, first saw “Newsroom” when it arrived in her campus email, which is one of the ways marketing distributes their publication. Fuller thought it was being produced by the journalism program.

Toni Albertson, journalism professor and the student media adviser, brought this to the attention of the English department at their regularly scheduled meeting. The department recommended sending a letter to the division’s dean, requesting that marketing change the name of its publication.

In a meeting with Albertson on September 27, 2017, Dean of Humanities and Social Sciences Karelyn Hoover said she would meet with Marketing Director Uyen Mai to discuss the issue.

Hoover emailed Albertson saying that the word “Marketing” now appeared as the source at the bottom of ‘The Newsroom’ emails, which read, “Provided by the Marketing and Communication Office, ‘Newsroom Notes’ showcases the latest major news and announcements from the Mt. SAC Newsroom.”

In another email, it showed the title of the emails had been slightly modified. “It is now called ‘Newsroom Notes’ and it is very clear this is a Marketing and Communication publication,” Hoover said in the email. “We now have a clear distinction between the journalism newsroom and the college’s publication. I’m very pleased with Uyen’s help on this.”

However, the student media was not satisfied with the changes. The publication is still called “Newsroom” not “Newsroom Notes,” and the problem goes far beyond changing the name.

The “Newsroom” webpage on the Mt. SAC college website is not clearly labeled as a product of the Office of Marketing and Communication nor were any of their stories. A visitor of the site has to search for the contributors to see it is from the marketing department. “Newsroom” could still be mistaken as an unbiased news source, and most dangerously, could be confused as a publication produced by the student media. But most important, is the search issue. 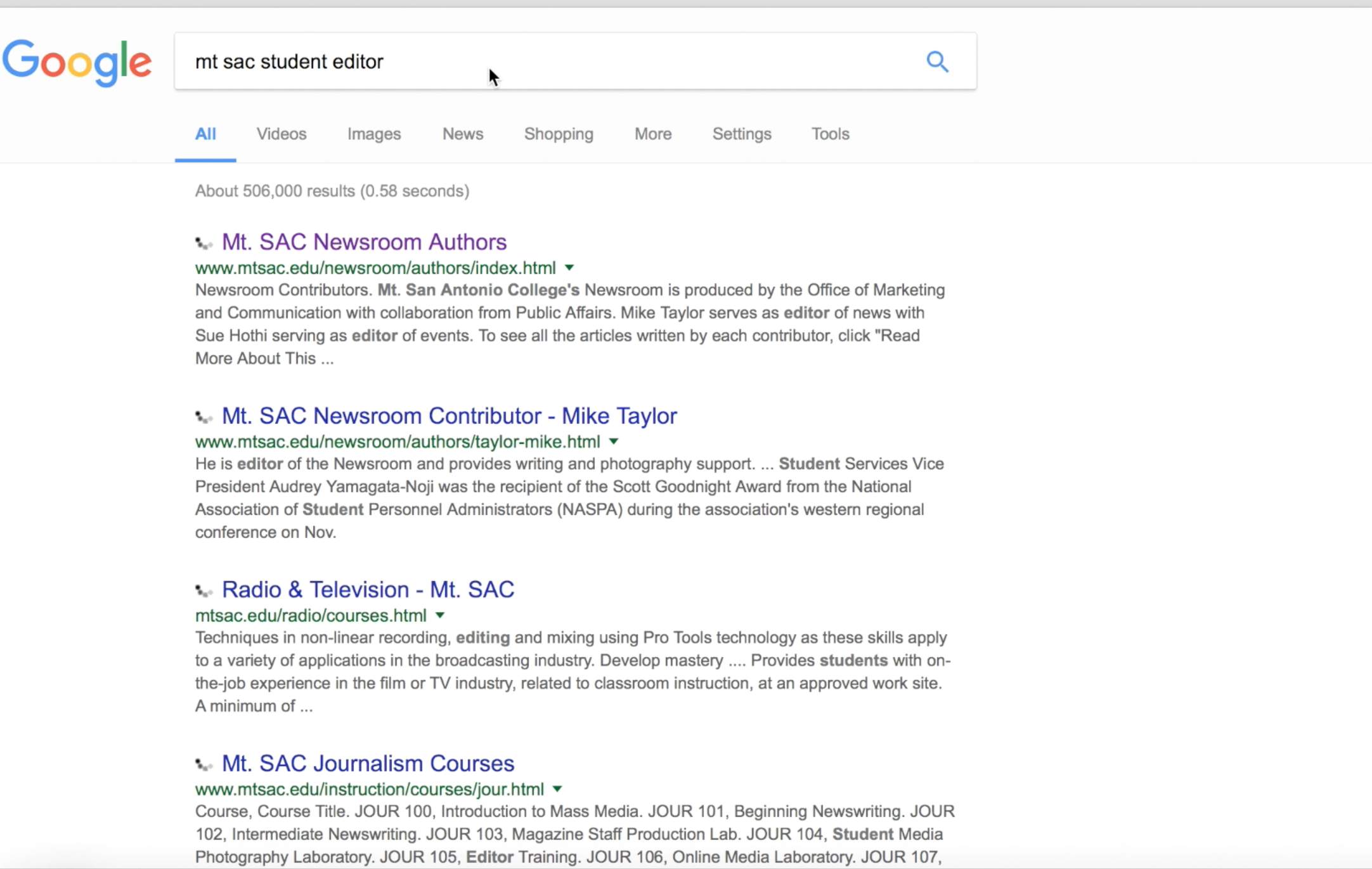 The marketing department used Search Engine Optimization SEO to promote the Newsroom in search engines. SEO is the practice of using strategy and tactics to promote the website on a search engine, so it can be easier to find, increasing the number of visitors on the page. This is misleading, because the contributors to “Newsroom” are not students, yet the student media staff is made up entirely of students. Even more disturbing is the use of a button to click on marketing’s “Newsroom” page which asks “Submit a Story” and directs visitors directly to the marketing staff writers. 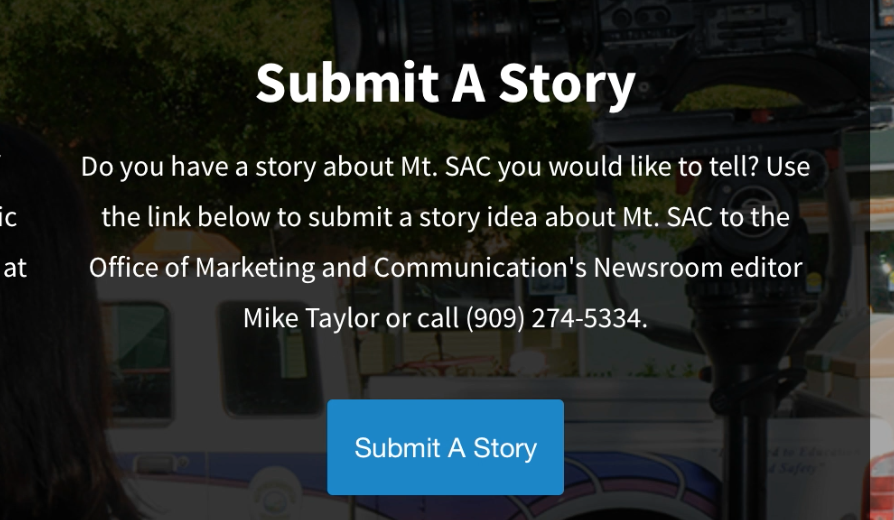 Hold on, the explanation as to why this is deceptive is coming.

The marketing publication is also listed as “Newsroom” on the college’s website under Campus Life, a tab specifically for students. Even the student run media is listed under it, not on top or as it should be listed: as the only student-run media. A marketing site under the tab “Students” and then the tab “Campus Life,” should not have a link titled “Mt. SAC News” with “Student Produced News” several links below it.

The student media consulted with Frank LoMonte, former director of the Student Press Law Center SPLC and current director of the Brechner Center for Freedom of Information at the University of Florida, and said he is always surprised when he sees these kinds of tactics used by marketing offices at colleges and universities to paint the college in a positive light.

“With colleges these days, it’s all about the image,” LoMonte said. LoMonte added that the section was “setting a trap” for leakers, as it worked as a “mailbox” for “intercepting stories.”

LoMonte added that if the marketing department specifically used SEO in an effort to divert news stories to marketing instead of the student press, they are participating in deceptive marketing practices. He also said that this sets a bad precedent for the college and its students.

At the meeting, Mai defended the use of the word “newsroom” and stated they are a news organization and distribute news to the community. When Lugo asked whether or not they would be unbiased in covering news such as the recent Dual Enrollment controversy, Mai said that even professional news organizations choose what they cover and stated everything is biased. Lugo responded, “We do reporting. Unbiased reporting.”

Mai also admitted to using SEO, but would not clarify which words were used.

Albertson, who had a long career as both a journalist and a public relations consultant, understands the use of SEO for marketing, but also the problems of using SEO in a deceptive manner, one that steps on the rights of the student media. She explained:

“I see it as stopping someone from the community, or a student, for example, who has a story that may be controversial or problematic for the college, from getting their story told by student reporters. That person may Google “Mt. SAC student news”‘ or “Mt. SAC student editor” and be immediately referred to marketing, and trust me, marketing is not about to publish a story that is unflattering to the college.” This is why having a marketing team market “Got a Story?” is deceptive.

Frustrated with the lack of progress with the marketing team, the student staff contacted the SPLC for legal advice.

Mike Hiestand, a Senior Legal Counsel at the SPLC, said, “The question is, ‘Is this an issue of censorship?’ which is any time you’re taking action in an attempt to control or manipulate or dictate content choices. Hiestand said if the use of SEO interferes with the flow of information to the student media, it is a First Amendment issue, and possibly, a First Amendment legal claim.

Albertson met with Mt. SAC President Bill Scroggins to discuss the student media staff’s concerns. According to Albertson, Scroggins admitted to marketing’s use of SEO and commented, “Why wouldn’t we want positive stories published about Mt. SAC?” He added that the college wants to bring in students. Albertson explained to him the role of the student media, and according to Albertson, he responded that the journalism students write libelous stories. Albertson said she asked Scroggins for an example, and he said he had the libel lawsuits to prove it. She asked for an example of a lawsuit, and he cited a story written in 2013 about a coach accused of sexual harassment, misconduct. Albertson remembered the story and questioned how the story was libelous. Scroggins said the coach was innocent.

The story, titled “Coaches accused of sexual harassment, misconduct” is about two major lawsuits that stem from sexual harassment and sexual misconduct allegations. Both suits involved students and faculty members, which resulted in two coaches being dismissed. Albertson told Scroggins that the stories were not libelous and were factual. She asked when the libel lawsuit was filed and he said he wasn’t sure.

The meeting was left with Scroggins telling Albertson he would look into removing the student-related SEO words.

The student media staff met with Scroggins to interview him for several stories, including “Newsroom” on Dec. 7.

Scroggins told the student reporters that Mai is in the process of taking the word “student” out of the optimization for the Newsroom, since it is the most misleading word. Scroggins said some of the student media’s stories “have caused the college to be sued for libel.” He said that a story the student media wrote in 2013, the same story he cited to Albertson about a basketball coach, caused the coach irreparable harm, and according to the coach, was not true. He also said there was a lawsuit because of this story, but he later confirmed he did not actually know if the lawsuit was ever filed.

Albertson said, “There has been no libel lawsuit filed against the college since I became the full time adviser at Mt. SAC in 2006 because if there was, I would be the first to know about it.” She added that her students do not write libelous stories and are taught how to avoid libel early on in her courses. She also said the editors know how to read for libel and consult her if they spot a story that could be problematic.

Albert Serna, a current journalism student at San Francisco State University and former editor in chief of the Mountaineer newspaper, the student media print publication that evolved into what is now the digital student publication, SAC.Media, remembered the story well.

“We had interviewed a source who was credible and incredibly close to the story. I don’t recall if I am allowed to use her name or not, so I won’t, but she was very very close to Mr. Caveness [the accused coach],” Serna said.

“I would tell him to check the meaning of libel. It wasn’t libelous. We reported the facts of the story. There was no lie,” Serna said in reference to Scroggins calling the story he wrote, libelous.

Scroggins was asked by the student reporters for a more recent example. He said the student media recently published a story containing false information and questioned whether they fact-checked the story. The editor-in-chief of SAC Media, Cory Jaynes, went over the story, and found nothing false about the information and confirmed it had been fact-checked by him, and given a final read by Albertson. 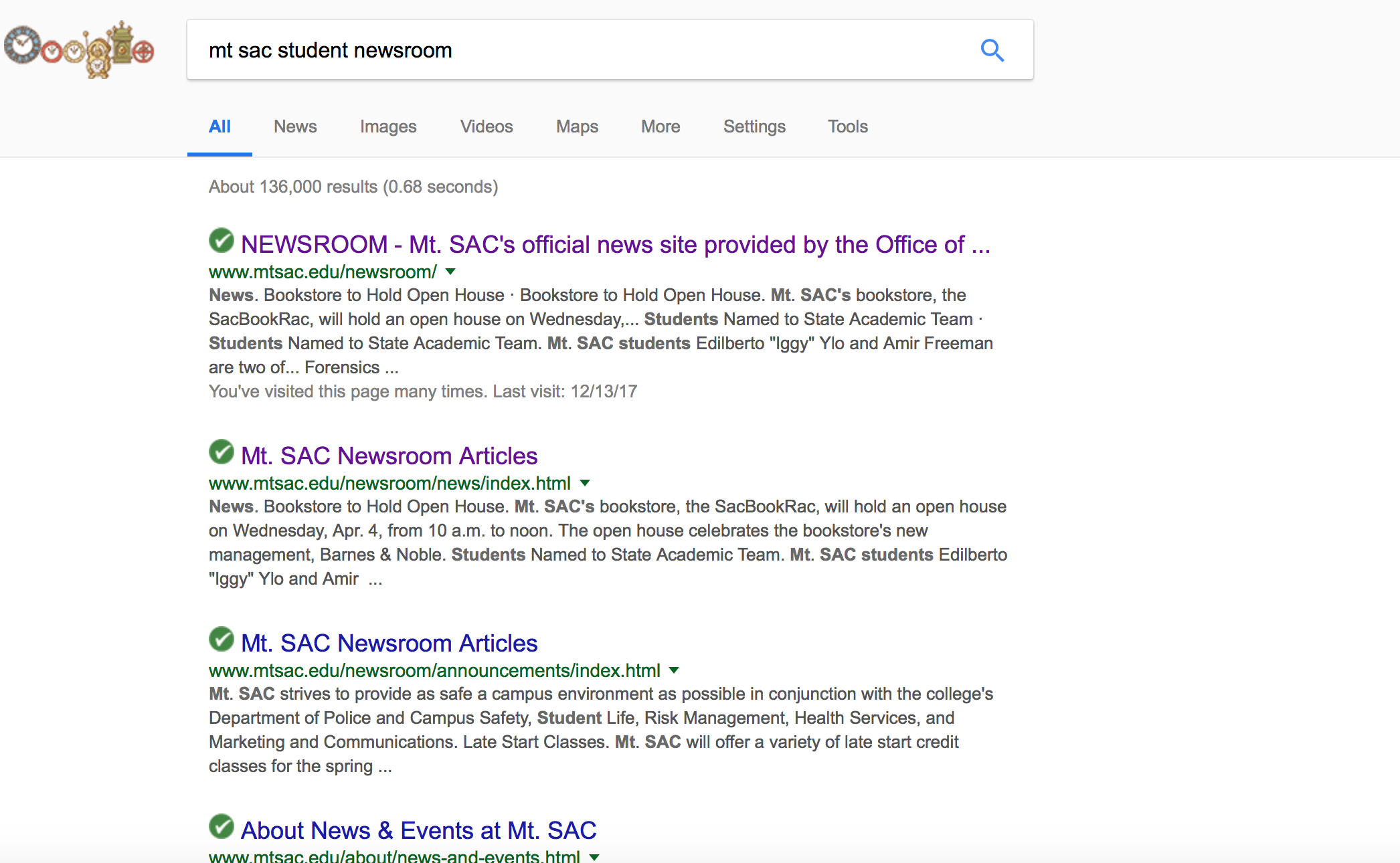 At the Academic Senate meeting on Thursday, May 24, Mai asked that if anyone has good news about the campus, that they share it with the marketing department. “We are trying to share more good news about Mt. SAC and the impact that we can have on the community and to help students have pride in the fact that they are coming to one of the best community colleges in the state,” Mai said. 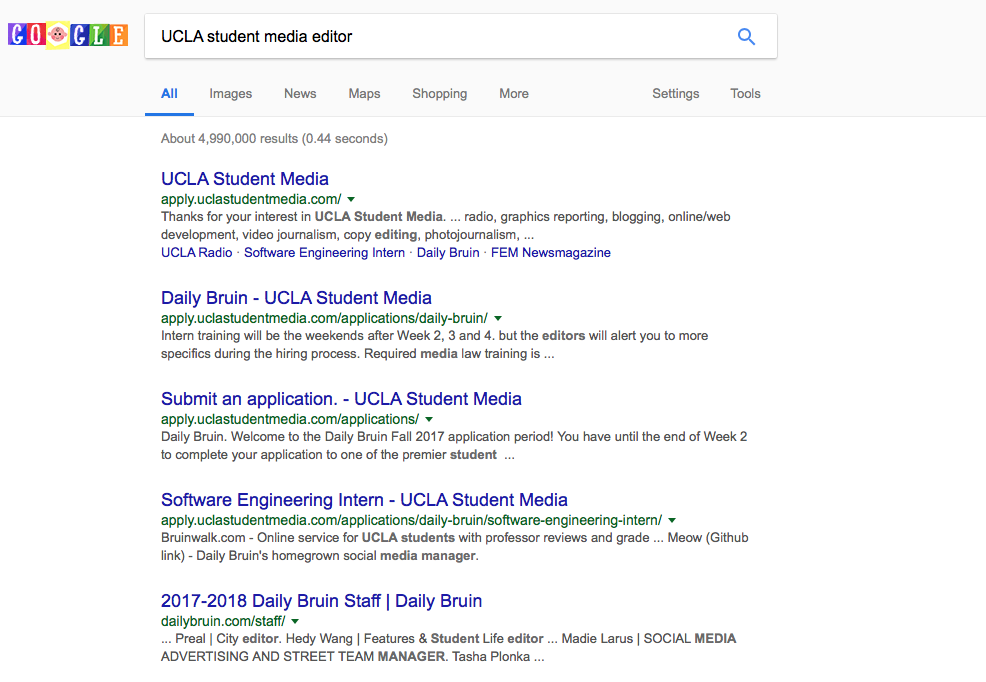 “There is a line between a university using the term ‘Newsroom’ for a marketing site or publication that puts out information about colleges of research, such as UCLA’s Medical School, vs. a community college using ‘Newsroom’ in a way that purposely misleads the public by using SEO and ‘Got a Story’ buttons that redirect news tips to a marketing department instead of a First Amendment free student press on campus,” Albertson said.