How the “Broken Lion” Gained Back His Roar 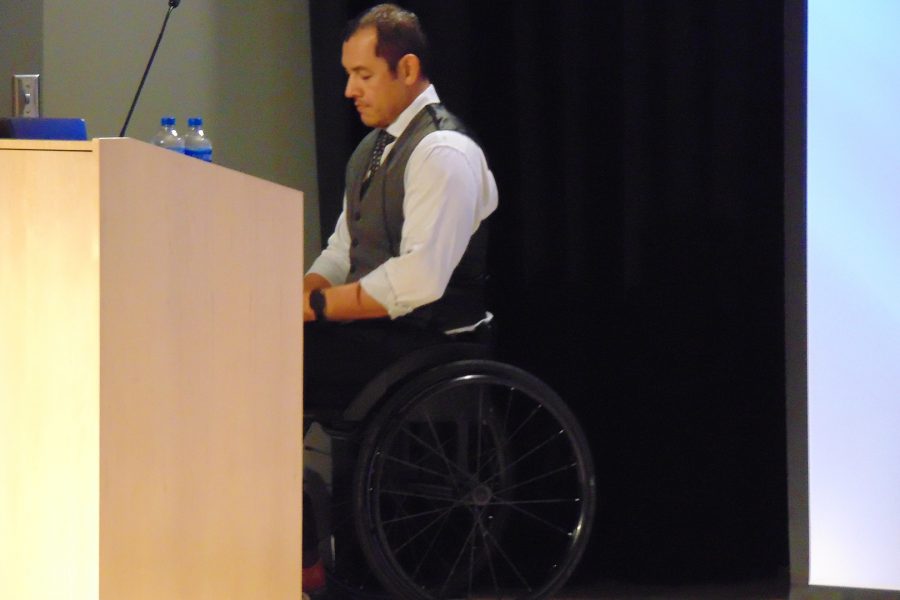 Eight days until the big day, Oz Sanchez was about to get married and become a Navy SEAL. Then he had a bigger day.

After five years of service in the Marines, he was involved in a life-altering motorcycle accident. He would later dub this the “Broken Lion Curse,” and it would stop his world for a decade, because he let it.

“Accidents don’t discriminate,” he said about the crash that paralyzed him at 25.

In 2001, he was riding his motorcycle when life gave him a new set of wheels. Going 50 mph, at a green light, by a driver running a red slammed into him.

At 25, his life was on pause. He was stuck with two new wheels and no horsepower.

His spinal cord was severely damaged but not ruined. It turns out he only lost 60-70 percent of the spinal cord, and the 30-40 percent that was not damaged is enough for him to move.

Even though it was difficult to move, his mind was a bigger barrier than his physical impairment. He said he was convinced he would not walk for a long time. His doctors told him he would never walk again.

Sanchez went to physical therapy after feeling a spasm while watching Friends on the couch. He found out it was not just a spasm.

It seemed miraculous, but the 30-40 percent that remained was enough for him to move his body. If he had severed the entire cord, he would be completely unable to walk.

With L-shape orthotics, a brace-like support for the ankle and calf, he can lock his knees out and move. He described this as similar to walking on stilts.

He can now walk with a crutch because he still has control of his quads, but walking is a massive workout for him, and if he stands for too long he will sweat.

From East LA, Sanchez went to school in Whittier and considers K-12 a blur, so much of a blur that he lacked ambition after high school. He didn’t have a clear idea of what he wanted to do–only what not to do.

He had no plans to join the service, and he didn’t think he’d be successful in college, so he decided not to go.

Fear of failure was an early mental block.

He only had two real goals in life at that point: get enough money to buy gas for his ’79 Buick Regal, and to get a girl and have children.

Sanchez got involved with the wrong “extracurricular activities” and started to have run-ins with the law. He remembered seeing the same judge multiple times.

“Homeboys were getting tats,” he said. “Found myself getting deeper and deeper.”

Sanchez told the judge a conviction would make it impossible to join the service, and he would join to avoid jail.

Even though he did not really want to enlist, the statement backfired because he signed a federal document in 1996 and was now enlisted.

At 20, he was in the Marine Corps, and his life was gaining structure. He felt at home because his mother screamed more than the drill instructor. In the Marines, he had role models. His father wasn’t around much because he worked the graveyard shift.

He was about to enter Basic Underwater Demolition/SEAL training when the accident happened. The road to recovery was a different kind of training.

Sanchez, now 42, reflects on his life and his road to recovery.

He wanted to cycle again. Before the accident, he road a bicycle. Now, he is cycling again–para-cycling.

In 2005, at 29, he was invited to a training camp, and the next year he decided he wanted to make the team.

He plans to retire in 2020 after a fourth and final appearance in the Paralympics.

He recalled talking to teammates who’d also been through accidents or injured in combat. Despite their physical difficulties, they were happy.

He said he reflected and tried to figure out what it was that changed, and challenged the notion that he was doomed to be unhappy.

The “Broken Lion Curse” is what he named the frame of mind he was in.

He said people do not think about making lemonade, and they think the grass is always greener.

“The grass is only greener where you water it,” Sanchez said.

“Know no limits” is his mantra.

He encourages everyone to find a “why” and use it as motivation.

Sanchez’s “why” is his sister. He said she is homeless and has five children from three different fathers. She is in jail.

His “why” used to be a brother. When he wanted to become a SEAL, he wanted to compete with his older brother who was joining Delta Force. His brother got in and has three to four purple hearts. The difference between his siblings motivates him.

He said his experiences taught him to seek out lessons in every experience and that perception is a choice.

“Events are neutral of meaning. We attach meaning,” Sanchez said.

He learned about himself along the way, and he is proud of his bachelor’s degree in business management.

All of this comes from someone who did not think he would be successful in college. He is now researching theory behind what he had learned and is a year into graduate school. He is also getting married next month.

In three years, he got off meds from exercise, and it all started with a post-it.

A post-it he took with him every day and scotch taped to hotel room mirrors.

The post-it that celebrated him standing at the mirror to brush his teeth.

A post-it he has a tattoo of now.

Oz Sanchez’s speech was arranged by the student equity center as a part of their student equity series on Wednesday, May 23 in the building 13 auditorium.