Board Passes Parking Renovation, Thanks Malmgren 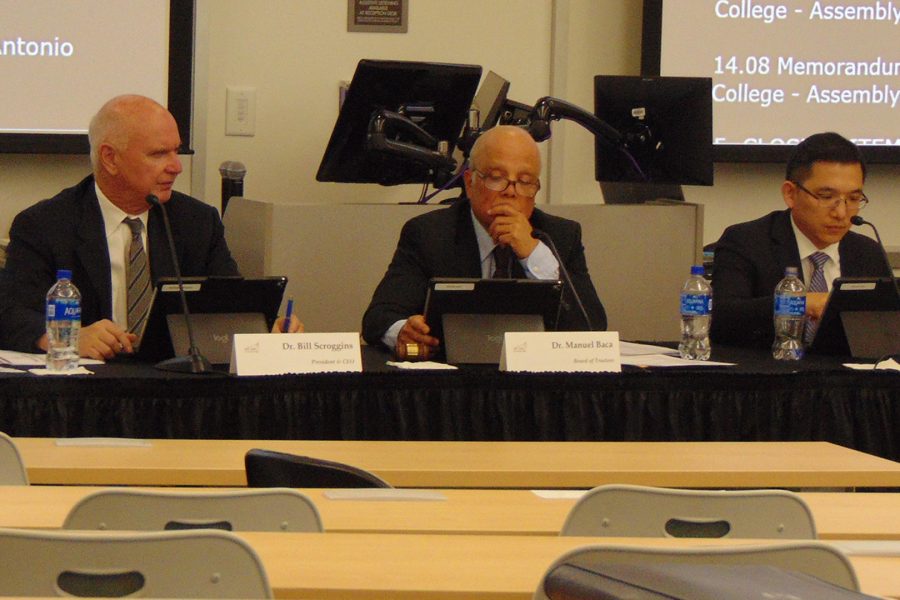 Due to a power outage, the meeting was held in the Business and Computer Technology Center, Building 77, Room 1000. Photo Credit: Joshua Sanchez/SAC.Media.

The Mt. SAC Board of Trustees met for a regularly scheduled meeting on Wednesday, July 11, in a new building to congratulate Thomas Mauch and other appointees, thank Irene Malmgren, and discuss parking before passing all items.

Every board member made the rounds to congratulate Thomas Mauch in his appointment to Associative Vice President of Student Services.

President William Scroggins even joked that the two were compared so much, and looked similar enough that they should find a way for him to take his place and that no one would be the wiser.

Following the cheers and laughs came speeches from each member about the Vice President of Instruction, Irene Malmgren.

“I would not be sitting in this position if not for Irene Malmgren,” the individual who provided the Management Steering Committee report said.

Vice President Administrative Services Michael Gregoryk asked to speak after that to echo her statements and say that even if Malmgren and him did not agree on an issue they knew they both had each other’s support.

Board members Robert Hidalgo and Clerk Jay Chen offered to help Malmgren pick any avocados she might need help with, citing how much they will miss her and her food.

“We’ll miss you, those are going to be some big shoes to fill,” board member Laura Santos said about Malmgren.

Board member Gary Chow made a joke along the lines of her leaving after he’s only been here for four weeks, and President Manuel Baca assured everyone in attendance that she will still be around by asking her if she was going to attend the football games.

Malmgren nodded, and Baca continued to say her service was “Citrus’ loss” and “our gain” and when he found out she had turned in her paperwork on the day of this Board of Trustees meeting, he joked by asking if they could have convinced her otherwise.

“Irene has just been an outstanding Vice President of Instruction,” board member Rosanne Bader said before elaborating on her experiences with Malmgren.

Scroggins, however, delivered a very personalized send-off to Malmgren and she dabbed her eye under her glasses with a cloth after he finished speaking.

“She is a mentor. She sees the best in people, even me,” Scroggins said. He then went on to say they never disagreed, and that they channeled each other.

He called her a strong leader for establishing a basis for the Instruction team to go on without her, and went on to say he might still call her and that he told her thing he could not tell anybody else.

Following the reports and well wishes for Malmgren was a discussion on the financials regarding financial aid.

Director of Financial Aid and Scholarships, Chau Dao, provided all the figures, explaining that 64.9 percent of students with financial aid use the BOG Fee Waiver, whereas 30.2 percent use the Pell Grant.

She summed it up as “every Pell gets a BOG, but not every BOG gets a Pell.”

Following the particulars of her financial report was the consent calendar which passed with only seven items pulled. Those items would later all be approved.

One important item that was pulled is 9.01, regarding Parking Lot B Renovation and Bid 3193.

The item approves changes to the lot, and awards the project to PaveWest, Inc., Artesia, CA.

The catch here is that parking spaces will be shortened by six inches to make room for more spaces. Islands and passageways to relieve congestion may be removed as well to fit more spaces.

While Lot B holds 1,300 spaces right now, this plan to restripe will add 400 news spaces. Traffic is expected to get worse, and this “inconvenience” was pitched as needed for the lack of spaces.

Lot B is further complicated with the Auditorium, that is to be demolished and rebuilt at a later date.

Regarding other lots, only Lot A would be suited for a similar remodel, and Lots R and S cannot even be started without new bond money, if the measure passes in November.

Lot R and Lot S are expected to be worked on in March of 2019 and be finished 14-18 months after, if the bond is passed.

It passed with a 5-1 vote, Santos was the only one opposed.

The next regularly scheduled meeting of the Board of Trustees is on Wednesday, Aug. 8.