Donors and Guests Congregate for a Private Tour of the Ongoing Mt. SAC Stadium Construction 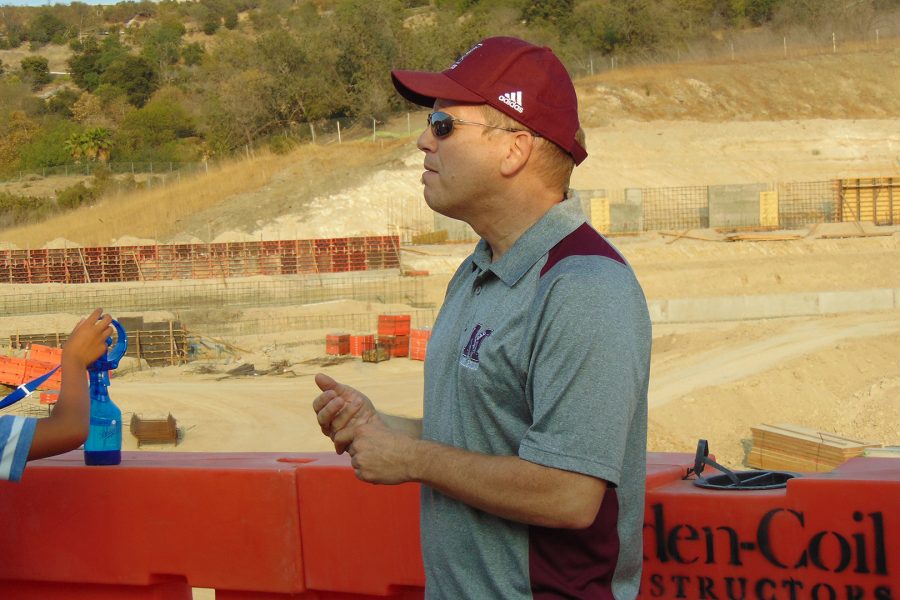 Diving deep into the dirt, a small group of individuals gathered to view the ongoing Mt. SAC stadium construction project on Sunday, July 15.

Donators and distinguished guests had to RSVP to attend this catered event.

Habit Burger catered out of a food truck, providing complimentary charbroiled hamburgers, fries, and soda. Additional beverages were located in an ice chest from the Mt. SAC aquatics center.

All entrants registered at the end of Service Road off of Temple Avenue and Bonita Avenue in the remains of Lot 50G.

Passing the Habit Burger food truck to the right, individuals gathered to the meeting and dining area east of Building 48.

Scroggins said that “I remember what a beautiful stadium that was, and when I came back here in 2011 as college president, the good thing was, it hadn’t changed a bit,” Scroggins said.

“The bad thing was, it hadn’t changed a bit,” Scroggins added, quipping about the stadium.

He also spoke about the current renovations and their purpose.

“To look to the future, while we celebrate the past. You’re going to see the stadium of the future,” Scroggins said.

Scroggins was not the only one encouraged by the construction.

“The best is yet to come, we had a glorious past, and we’re going to have a glorious future,” Mt. SAC Relays Director and Head Coach, Doug Todd said.

Aside from the stadium, Heritage Hall is a focus of this project. It will be located past the planned pedestrian bridge, but before the stadium.

The Mt. SAC Heritage Hall Foundation’s building will be dedicated to special people, in the same manner trees were planted in memory of special people.

Todd, who has been involved in the project, also had to take the tree pledge when he planted a tree, years back and still remembers the oath:

“We who plant trees, do so knowing we may not partake of their shade, but so others may”

Todd also said the pledge was a great metaphor for what is being done with the stadium and Heritage Hall.

Executive Director of the Mt. SAC Foundation, Bill Lambert said that $1.5 million has been raised and that the college has matched all donations dollar to dollar.

After the speakers, two to three trips were made back and forth from the dining area to the construction zone. About five cars transported an estimated 60 people in groups of four to six between the locations.

Gary Gidcumb, one of the project leads, explained and fielded questions at the construction site.

The stadium is to be a world class facility and broadcast ready, seating up to 20,000 people maximum. The stadium’s field will be comprised of natural turf, and the practice field will be made up of astroturf.

The scoreboard will be at one of the furthest piles south of the location visitors were taken to, and players will be given the NFL feeling as they approach the field.

Where there is currently plywood there will be bleachers, with the left side being planned for visitors.

Heritage Hall will be about 3,600 square feet, and Lot S will become a parking structure with four levels.

A pedestrian bridge will end at the parking structure and Heritage Hall, connecting the campus’ educational core to the north with its athletic core to the south.

Tilden-Coil expects to finish the stadium project by the winter of 2019 if there are no further external delays.