The Stadium Saga From Olympic Promise To Pile Of Dirt 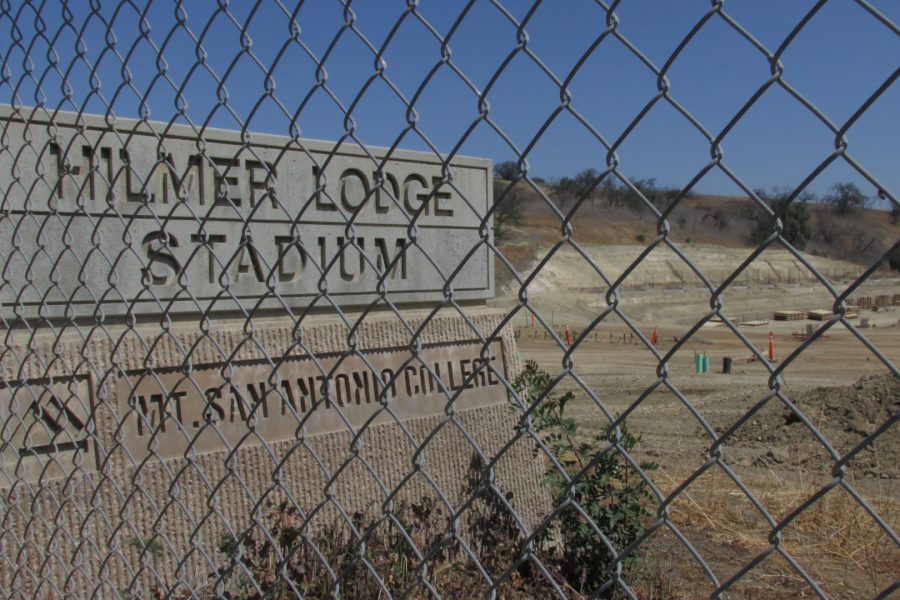 Following the decision by USA Track & Field to strip Mt. SAC and Hilmer Lodge Stadium of the Men’s and Women’s Olympic Trials in May, documents released through a California Public Records Act request indicated the organization only learned of the lawsuits directly impacting the college’s stadium project two months after it had awarded the event.

According to the documents, USATF Managing Director Adam Schmenk on Oct. 27, 2017 demanded Mt. SAC provide a guaranteed timeline for the stadium’s construction and a completion date for no later than April 2020. Schmenk had also indicated to Mt. SAC Athletic Special Events Director Doug Todd that USATF must be given those assurances by Nov 17. 2017.

USATF Deputy General Counsel Donald Woodard echoed Schmenk’s demands on behalf of the organization to Mt. SAC President William T. Scroggins, writing on Jan. 3, 2018, “We require unequivocal proof that the lawsuits have been dismiss or otherwise resolved in such a manner as to remove any doubt that construction of the stadium and other facilities will not be delayed in any way whatsoever.”

Ultimately, Woodard wrote to Scroggins and Todd on May 1, 2018, informing them the organization was to reopen the bidding process for the Olympic Trials to new cities, as the “risk [for the Mt. SAC bid] is too great with the clock ticking on the completion date.

In an effort to release a joint statement, USATF Chief Marketing Officer Jill Geer had proposed language in the release indicating the decision to strip the college of the events was a mutual decision by the parties involved. However, Mt. SAC objected and released its own separate statement.

War has a way of wearing down the most weathered soldiers. For Varok Saurfang, this one could very well be his last. pic.twitter.com/QiJOCkEUpo

USATF then proceeded with its announcement of stripping Mt. SAC of its hosting rights to the 2020 Olympic Trials after the organization’s board of directors voted unanimously to reopen bidding for the event, citing “continuing litigation surrounding construction” at the stadium site and “resulting delays on planning” for the 10-day event as reasons for their decision.

In the aftermath of the announcement, Scroggins maintained that despite USATF’s statement, the organization had not “followed the provisions” of their contract with the college “to terminate it.”

United Walnut Taxpayers – a group of Walnut residents still in litigation over Mt. SAC’s stadium redevelopment project – maintains the group was never against Mt. SAC hosting the event and only opposed the use of Measure RR funds on the stadium. UWT also revealed that at no point did USATF contact the citizens group.

“This is a relationship that’s going to have to continue after this litigation,” UWT President Layla Abou-Taleb said.

The City of Walnut also litigated against Mt. SAC over the extensive redevelopment plan at the stadium site before reaching a settlement with the college in April.

“We were not told that Mt. SAC was competing for the Olympic Trials. We read it in the paper; it was the first time we got wind of it. We really don’t object to the rebuilding of the stadium. We were supportive of the Olympics coming to Walnut,” Walnut City Councilman Robert Pacheco said. “We made like three or four different [settlement] proposals. We’ve been trying to settle for a long time. Well most of the time Mt. SAC believed that they had the right to do everything that they’re doing and we kept telling them, ‘Well, you can’t because you’re basically violating the law.'”

In December 2013 Mt. SAC moved forward with an extensive renovation plan for Hilmer Lodge Stadium in hopes of putting together a lucrative package to bid for the 2020 USA Track & Field Olympic Trials.

The primary source of funding for the project would be the 2008 approved Bond Measure RR which originally set out to redevelop, update & construct new academic facilities on campus. Bond Measure RR was approved by 69.95 percent of voters and raised $353 million.

When the stadium project was announced, the estimated cost ran upwards of $62 million with a schedule completion date of 2017.

In March 2015 as tensions escalated between the college and the City of Walnut over the construction of an on-campus five-story parking garage, the Walnut City Council affirmed its intent to enforce zoning codes and regulations relating to any development proposed by the college.

Walnut sought veto power over the stadium project, which was to break ground that summer, as well as other projects proposed at the time, including a solar farm and the parking garage.

Mt. SAC argued that as an educational institution, it is exempt from local zoning regulations, and thereby only needs approval from the state.

However, according to California Government Code 53094 and Educational Code 81951, school and community college districts could be exempt from city zoning codes only to build classroom facilities on campus.

The City of Walnut and a residents group under the UWT name followed through with threats of litigation.

“If this lawsuit can win their attention, we can sit down and talk and come to an agreement,” Walnut Mayor Mary Su said.

“It’s sort of outrageous that you know all of the school academic faculties, student library, you know, education facilities, they’re going to spend more than 25 percent of the entire bond measure on a stadium that wasn’t even advised to the students, faculty, and community,” UWT attorney Craig Sherman said. “We find it pretty outrageous.”

In June 2017, via an 11-2 vote from the USATF Board of Directors, Mt. SAC was awarded the hosting rights to the 2020 Olympic Trials, beating out other bids from past hosts in Eugene, Oregon and Sacramento.

However, by then the original renovation the college had proposed in 2013 had evolved towards the demolition of the original stadium structure to make way for a new state-of-the-art sports facility.

An estimated completion date of 2019 was set for the new 12,500-seat stadium, which was designed to be expandable to over 20,000 seats. The newly projected cost of the project was also raised to $87 million.

In September 2017, the City of Walnut formally filed a lawsuit challenging the Hilmer Lodge Stadium redevelopment project due to its significantly larger scope and sought to invalidate all contracts approved by the Mt. SAC for the construction of the project, stressing that the project had gone forward without public input or adherence to zoning laws.

Scroggins remained confident about litigation not resulting in “delays that are sufficient to prevent the building of the stadium by June 2020” to meet its commitment with USATF.

In March 2018, the stadium project was dealt a major blow in Los Angeles Superior Court with the City of Walnut being granted a preliminary injunction prohibiting the college from moving forward with on-site grading.

This prompted UWT to also move forward in seeking an injunction restricting the use of Measure RR funds on the stadium site, and thus force Mt. SAC to look for alternate financing.

Even despite these setbacks, USATF still publicly stood by the college.

“Mt. SAC has continued to assure us that their ability to complete the stadium and host a successful Olympic Trials will not be impacted by current litigation,” Geer wrote in a March 20, 2018 email to the Orange County Register.

Mt. SAC finally settled with the City of Walnut in April, agreeing to seek alternatives to its parking garage plan and abandon its solar farm proposal, as the settlement also nullified the injunction granted to Walnut and cleared the way for the college to resume construction efforts at the stadium site.

According to Scroggins, that settlement cost $1.4 million in court ordered payments.

Pertaining to the UWT case, Los Angeles Superior Court Judge Holly E. Kendig rejected the group’s request for an injunction. Barring a settlement with Mt. SAC, the UWT case is currently scheduled to go to trial in January 2019.

After Mt. SAC lost the Olympic Trials the college had spent a reported $20,000 bid fee and a $500,000 nonrefundable rights fee, among other expenditures besides its legal fees.

Before the contract had been dissolved, the college was also on the hook for $1.25 million in athlete support, which included travel, lodging arrangements, and an addition $1.25 million in prize money.

“[Mt. SAC’s] actions and conduct have directly led to the loss of the 2020 U.S. Olympic trials; It is a result of reaping what they sow,” Sherman said attributing the college and its legal team’s “shortsightedness” as the cause for losing the Olympic Trials.

Mt. SAC is currently planning to spearhead a campaign for a new bond measure set to go up on the November ballot this year. Mt. SAC Associated Students has already approved an estimated $150,000 contribution for the new campaign.

Despite the college’s setbacks, the City of Walnut is resigned to the belief that new bond measure will also likely prevail.

Ultimately, USATF announced on August 2, 2018 it had selected the University of Oregon’s newly renovated Hayward Field to host the 2020 Olympic Trials. Meanwhile, the Hilmer Lodge Stadium construction site remains on track to be finished in 2019, slowly turning from a pile of dirt to a field of dreams.