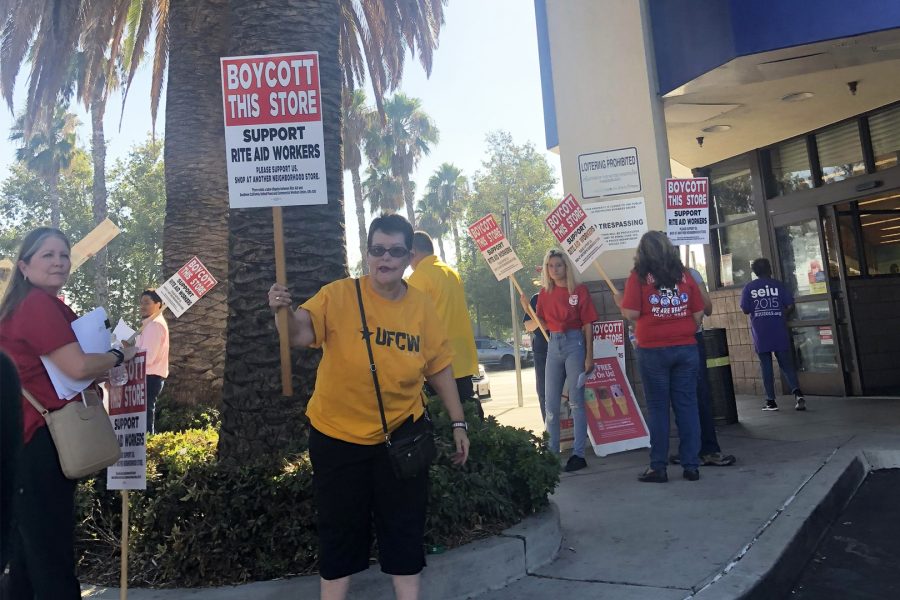 In a protest on Sept. 7, Rite Aid workers and individuals from the UFCW asked people to boycott the Pomona store. Photo Credit: Berenize Montoya/SAC.Media.

A group of protestors at a local Pomona Rite Aid asked people to boycott the 2059 South Garey Ave. store on Friday, Sept. 7.

When customers visited the store they were encountered by protesters with signs that read “Boycott this store. Support Rite Aid workers.”

They were protesting the company’s refusal to negotiate a deal with their employees.

They want to reduce full time hours from 40 to 37, which would change the union’s established ratio for employees.

These boycotts were not limited to Pomona. Activists took their protest to an Ontario store at 1841 Fourth Street and Vineyard Avenue on Wednesday, Sept. 12.

At the Ontario boycott, one CWA advocate chanted a call and response.

Police showed up at the scene, but activists only left after finishing their scheduled protest from 3 to 5 p.m.

The protest allowed employees the ability to voice their opinions, a privilege they would lose if Rite Aid’s proposal to get rid of the union’s healthcare plan went through.

“Once they get complete control [of the healthcare plan], the cost will go up,” President of UFCW Local 1428, Mark Ramos said.

It is not the first time Rite Aid tried to seperate from the union’s healthcare plan.

This is the third time they have attempted this, and Ramos said cost would go up, while coverage would go down. He added that this is unacceptable.

“Corporate America cares more about CEO’s and board members than those workers who make the money for them,” Ramos added.

The next scheduled protest took place on Friday, Sept 14 from 4 to 6 p.m. at the La Puente Rite Aid store located on 13905 Amar Road.

The boycott in La Puente was larger as several more supporters joined in.

People of all ages and backgrounds gathered to support the workers.

These individuals all said they stand united with the Rite Aid employees.

State Senator Ed Hernandez represents the 22nd district and grew up in La Puente. He said he recalls eating ice cream from this Amar store when the Rite Aid was branded as a Thrifty PayLess drug store.

He added that local officials were advocating and striking with the UFCW to stand up for hardworking employees.

Senator Hernandez also spoke to the manager of this Rite Aid to express his concerns for employees that rely on the healthcare benefits that corporate is considering cutting.

He advised individuals to join the protest.

“Engage politically. Stand up for your rights, we have working people that are struggling every single day that we have to make sure that we stand up for working people so that they can put food on the table and pay their rent, maintain their benefits, that’s what it’s all about,” Hernandez said.

Union members added that they do not hate Rite Aid, and this protest is to support workers.

The protest itself is legal as long as the protestors keep moving and allow customers to still enter the building.

Union members said they wanted Rite Aid to know they have power and know they will stand up to this action.

Hernandez said the most important thing is to “respect the workers, treat them with dignity, but more importantly don’t strip away their benefits.”

One petition to boycott Rite Aid has 2,696 signatures out of a goal of 3,200, and more information can be found on a Facebook page supporting boycotting Rite Aid.