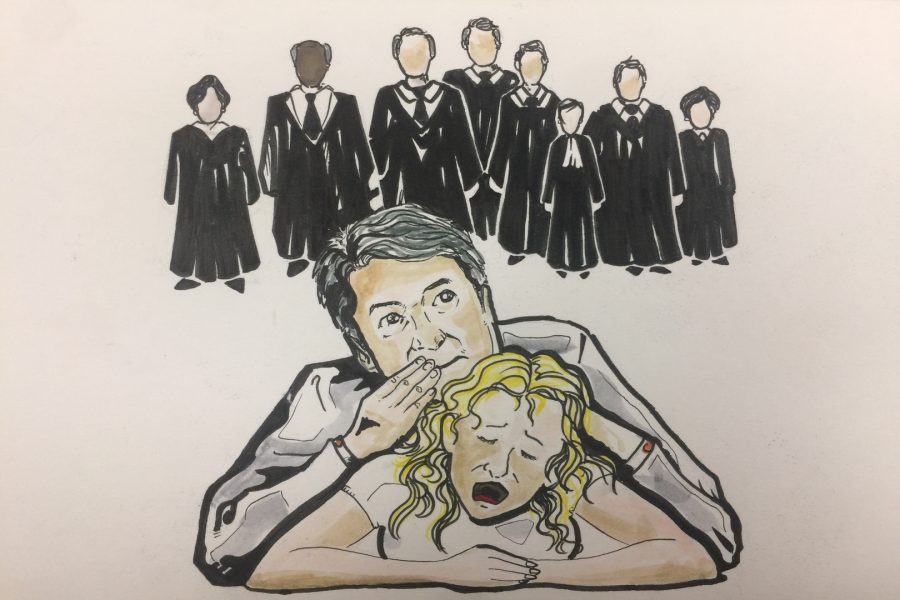 “I’ve never sexually assaulted anyone, not in high school, not ever. I’ve always treated women with dignity and respect.”

In the latest accusation against U.S. Supreme Court nominee Brett Kavanaugh, Julie Swetnick, through attorney Michael Avenatti, released her sworn statement alleging Kavanaugh and his friend Mark Judge were present when she was gang raped. Kavanaugh has denied the accusation.

Swetnick’s accusation was first shared through her lawyer Michael Avenatti:

In her affidavit, Swetnick said Kavanaugh and Judge engaged in “abusive and physically aggressive behavior toward girls,” which “included the fondling and groping of girls without their consent” and ‘not taking ‘No’ for an answer.”

She also said, “I became the victim of one of these ‘gang’ or ‘train’ rapes when Mark Judge and Brett Kavanaugh were present… During the incident, I was incapacitated without my consent and unable to fight off the boys raping me. I believe I was drugged using Quaaludes or something similar placed in what I was drinking.” According to the New York Times, Swetnick has worked as a web and information technologist. She has had a variety of public- and private-sector jobs over the years, including working for federal government agencies. According to her résumé and her statement, she held several government clearances, including with the State Department and the Justice Department.

Allegations against Kavanaugh began when Dr. Christine Blasey Ford, 51, accused him of removing her clothes while intoxicated at a party in 1982 when they were teenagers. Ford contacted The Washington Post’s tipline in July after she saw Kavanaugh’s name on the shortlist as a Supreme Court nominee. According to a timeline by CNN, Dr. Ford sent a letter to California Senator Dianne Feinstein through California Democratic Representative Ana Eshoo. The accusation was kept silent, as requested by Ford, until Sept. 13, when Feinstein confirmed she had a letter she forwarded to the FBI for an investigation. On Sept. 16, The Washington Post published an article in which Ford comes forward and details her allegations.

Since Dr. Ford’s name was disclosed in the interview and she has agreed to testify in court Thursday, Sept. 27, the New York Times reported that her lawyers said she has been the target of threats, harassment, and she and her family have been forced to “relocate” from their home.

The second allegation came through when a story in The New Yorker published a detailed interview from Deborah Ramirez, 53. According to Ramirez, she and Kavanaugh were freshman at Yale, she went to a dorm-room party where she played a drinking game. In her interview, Ramirez detailed what happened at the party:

After she drank and was inebriated she found herself on the floor, foggy and slurring her words, as a male student and another stood nearby… A third male student then exposed himself to her.

“I remember a penis being in front of my face,” she said. ‘I knew that’s not what I wanted, even in that state of mind.’ She recalled remarking, “That’s not a real penis,” and the other students laughing at her confusion and taunting her, one encouraging her to “‘kiss it.'”

In the story, she also named Kavanaugh, and described him pulling up his pants, laughing. “I can still see his face, and his hips coming forward, like when you pull up your pants.” She recalled another male student shouting about the incident. “Somebody yelled down the hall, ‘Brett Kavanaugh just put his penis in Debbie’s face,’ ” she said. “It was his full name. I don’t think it was just ‘Brett.’ And I remember hearing and being mortified that this was out there.”

Kavanaugh has denied all accusations. As reported on CNBC, Kavanaugh said, “This is ridiculous and from the Twilight Zone. I don’t know who this is and this never happened.” CNBC also shared the testimony he will provide to the Senate Judiciary Committee on Thursday: “There has been a frenzy to come up with something, anything, no matter how far fetched or odious, that will block a vote on my nomination… Last minute smears, pure and simple.”
People on social media have been sharing their views on Kavanaugh and the victims who came forward.

Charles Jensen, 41, Program Director of the UCLA Extension Writers’ Program, said, “I believe her. This Post article dives into the culture of his high school and college experiences. He has now on two occasions been quoted as saying, ‘What happens at X stays at X,’ and that culture of secrecy fosters dangerous rape culture.”

Imagine being so brave that you come forward with testimony that will likely ruin your own life just to protect the lives of strangers.Thank you, Dr. Blasey Ford. Thank you, Deborah Ramirez. Thank you, Julie Swetnick. pic.twitter.com/7SaE3hYpiU

Avenatti is a third rate lawyer who is good at making false accusations, like he did on me and like he is now doing on Judge Brett Kavanaugh. He is just looking for attention and doesn’t want people to look at his past record and relationships – a total low-life!

Political analyst and writer Richard Andrade Mills tweeted that he does not believe the victims without proof.

It should bother people that the left is going out of their way to convince us to believe three women accusing Brett Kavanaugh of inappropriateness— without any concrete evidence.

Republican Senator Lindsey Graham said of Swetnick, “If you went to a party once where people are being drugged and gang-raped, you wouldn’t go to the next nine.”

Lena Woo, MSW Intern, 34, said, “Rape culture is very prevalent in these high societies. There’s no reason for her to come forward other than to show solidarity that it happened to her and she’s now ready to stop Brett.”

Christian Noel, 33, Aerospace Quality Assurance Inspector said, “I think through all of this, I believe her and them… However, what’s more concerning and alarming isn’t just whether or not he did any of this, but his people’s reactions to this. The GOP’s appalling true colors are showing. It appears that they all defend him, because they are also guilty in some capacity. Furthermore, what message are they sending out to the world? That this type of behavior is acceptable? This issue… is bigger than politics and what we’re witnessing is all so infuriating.”

Serena Johnson, 32, Director of Development in Arts Education said, “I absolutely believe her. I was reflecting this morning on how many times I have heard men say ‘I want to fuck as many girls as I can tonight,’ when I was in college and high school, how many times I brushed it off as them just bragging. I am going through every time I heard someone call a girl a ‘slut’ or every time I heard about someone getting ‘too drunk’ and ‘sleeping’ with someone they didn’t want to at a party. Horrifying.”

Kavanaugh was first put forth as the nominee for Supreme Court after Justice Anthony Kennedy announced his retirement for July 31, 2018. Trump acted swiftly and nominated Kavanaugh, which was met with controversy from Democratic senators and women’s rights activists protesting the nomination. Kavanaugh’s ideology has followed him throughout his career. He served as Associate Counsel and Senior Associate Counsel to George W. Bush for five years. He was appointed as judge to the U.S. Court of Appeals for the D.C. Circuit. Democrats had asked to review a wide range of documents concerning his role as a judge over the past 12 years. This caused six Democrats on the Senate Judiciary Committee to file a lawsuit that advised the Central Intelligence Agency to release all documents related to Kavanaugh.

Last year, During the Garza v. Hargan case, Kavanaugh was part of the three-judge panel, which included Judge Karen Henderson and Judge Patricia Millet. Henderson and Kavanaugh released a per curiam order (a ruling issued by judges in unanimous agreement,) to prevent a minor, referred to as Jane Doe, to proceed with an abortion. This ruling stated that The Office of Refugee Resettlement ORR did not have to release her in order to receive an abortion, if she did not have a sponsor before the set deadline.

Judge Millet’s decision was that the refusal of Jane Doe’s abortion was unconstitutional. In an article published by Politco, Kavanaugh said, “The Government has permissible interests in favoring fetal life, protecting the best interests of a minor, and refraining from facilitating abortion.” Upon this decision, there have been concerns voiced from some organizations, such as Ultraviolet, an organization dedicated to social justice, including reproductive rights. The co-founder Nita Chaudhary said, “The truth is that Kavanaugh poses the greatest risk to Roe v. Wade we’ve seen. So we’re sounding the alarm.”

Ford will testify in front of the Senate Judiciary Committee at 10 a.m. on Thursday, Sept. 27.