Life Behind the Camera 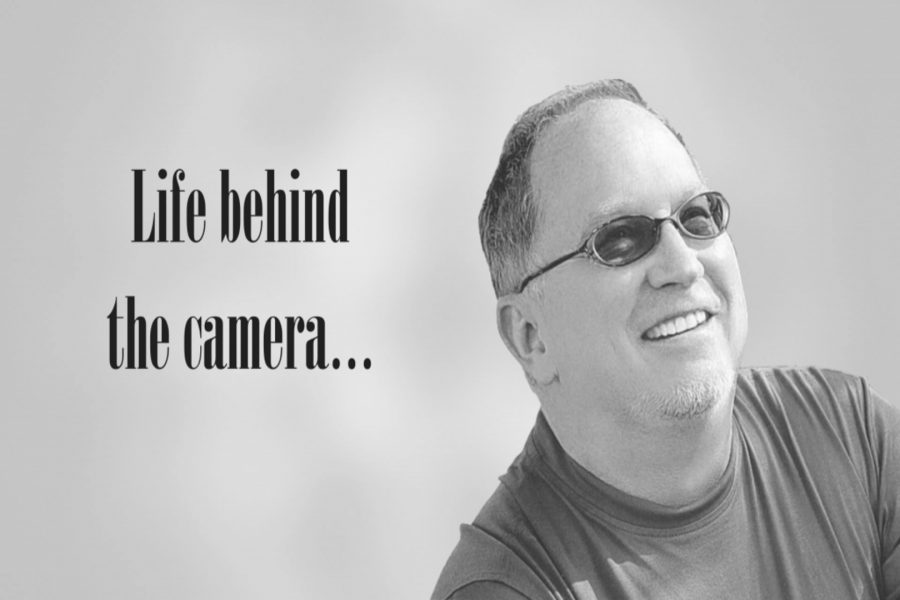 Brad Geagley learned early on what it’s like to feel a lack of support from his parents.  Born to a librarian mother and an undiagnosed psychotic father, his parents were married but had a difficult relationship.

“They held hands for 29 years just to keep from hitting each other,” Geagley, a-67-year-old adjunct professor of film at Mt. SAC, said.

When he was 12, Geagley experienced what it was like to have a younger brother who was sick. His brother was diagnosed with a kidney disease, which ultimately killed him at 26. Geagley had to raise himself for the next 10 years while his parents took care of his brother.

Geagley said he thinks that his difficult childhood is what helped him become who he is. To him, writers need to step back and not be involved emotionally.

Growing up, Geagley dreamed of being a producer and working in the entertainment industry. He wanted to work in movies or become a history archaeologist, but his parents wanted him to pursue business, even though it wasn’t his passion.

“They didn’t believe that anyone should enjoy their work life, but I wanted to enjoy my work life,” Geagley said. “I wanted to work in show business.”

His parents thought “it was the next thing from being trash.”

His view of Hollywood is what helped Geagley find his road map, especially when his father said that “Hollywood is only filled with whores and faggots.”

“I was myself in spite of them. They gave me something to fight against,” Geagley said.

The moment that sparked his desire and passion for show business was when he saw the 1963 film “Cleopatra.” He saw both his passions combined in one — the love for history and movies.

“[It] cemented everything, it provided the idea of what I wanted to do,” Geagley said. “I wanted to be Joseph L. Mankiewicz.”

One of the most memorable moments for him was when he met American film director, screenwriter, and producer Joseph L. Mankiewicz in a tribute that had been organized for him. Geagley recalled being in a line with Elizabeth Taylor, Martin Landau and others waiting for Mankiewicz to walk down the line.

He remembered times when he would talk over the phone with Mankiewicz. Geagley had gotten Mankiewicz’s daughter’s number from the phonebook. He called her, and her father answered instead. When Mankiewicz made his way down the line, he finally landed on Geagley. Mankiewicz threw his arms around him.

Geagley graduated from Cal State Fullerton and attended USC to pursue a master’s degree. He dropped out from USC because he found it unnecessary to pay so much money for something he had already learned.

After graduating, he worked at Saint Joseph’s Hospital of Orange for the next five years as a medical filmmaker. He helped create teaching materials such as videos, slideshows,and medical illustrations. He later worked in video games where he made connections that led him to work for Disney.

His first job at Disney was as an associate producer in the MGM studio tour in animation and feature animation. During his time at Disney, he worked on “Beauty and the Beast,” and “Roger Rabbit,” among others. He eventually worked for 12 years at the theme park, handling design development.

“If a plane is going to fall out of the sky and kill me, or if a building is going to come down and I’m working, what do I really want to do?” he said.

He reevaluated his life and decided to write novels. There were four things he knew he wanted to do —  write books, plays, documentary series or movies. His path was decided when his novels sold first.

He said that writing a novel is different in that you do it on your own without a team so you can’t blame anyone else.

“It’s like taking yourself over to a well and jumping in, Geagley said.  “Then you crawl back up stone by stone by stone until you see that little circle of light at the top.”

He said he believes that people need to be open to everything because you never know where your next story will come from.

“You never know what’s going to solve your problems,” he said.

Geagley works full time on his novels and part time as a professor. He began working at Mt. SAC after Dan Smith, film and television professor, contacted him for a recommendation for someone who teaches screenplay writing. He also worked at campuses such UCLA but he felt a stronger connection with students at Mt. SAC.

“You [students] need me a little more,” Geagley said. “You’re not God’s gift like you are at UCLA where you come from rich parents.”

He has written a new interactive play titled, “Scarlet Wedding,”  a comedy about French history on Saint Bartholomew’s Day Massacre. It depicts the wedding of the Catholic princess and the Protestant king that led to chaos. He is also working on another book which depicts Cleopatra’s childhood.

While he loves writing and producing, he enjoys teaching community college students the reality of life and the entertainment industry, especially since this would be his last semester teaching.

“I teach reality. I don’t teach what it should be or hope that it’s going to be.”