West Covina Residents Speak Against Singpoli’s Hotel On A Dump 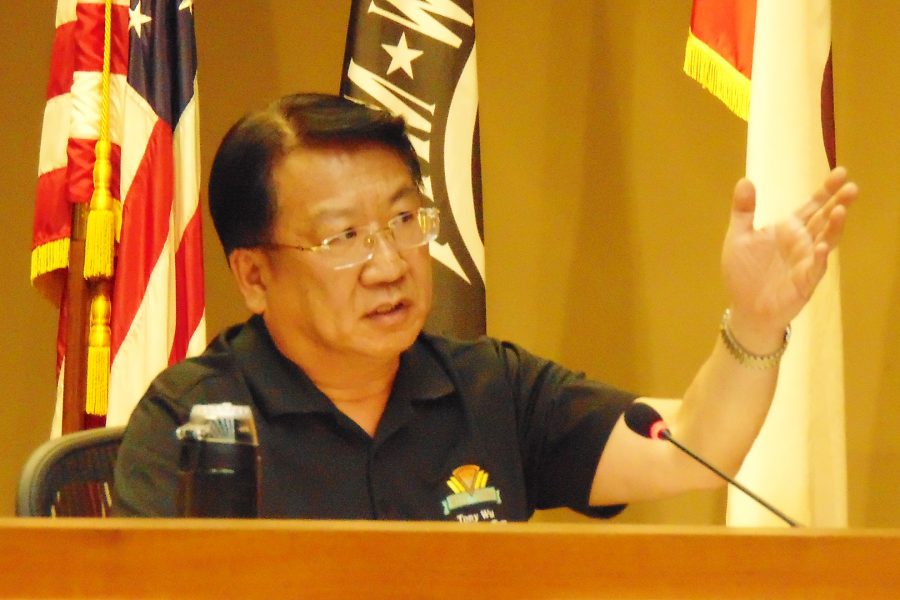 It took an hour and a half to hear out 18 West Covina residents and two San Gabriel Basin Water Quality Authority candidates vying for the city’s 11 votes.

Clark was called to speak first and said she was very passionate about environmental issues. She said that Valerie Munoz has plenty of time to serve, and Clark added that she has several contacts.

Clark concluded by asking the city to not vote if they do not support her, and mentioned that 51 out of 65 council members in the cities without voting rights were in her favor.

Munoz was called to speak after three more speakers. She began by thanking the council for nominating her and spoke of her service since 2016.

She spoke of her accomplishments, which included securing $80 million in Prop 3 funding, and said she has done her job.

After residents finished public comment, the council approved the consent calendar with item 10 pulled. They then moved to start with item 17, to accommodate the nominees.

After Wu grilled the two nominees with questions regarding BKK, he abstained from the vote. He originally asked to table the item until it would be brought before the new council.

Council member Mike Spence was the only one who voted against giving Valerie Munoz West Covina’s 11 votes, saying that he votes for Clark.

The vote concluded in favor of Valerie Munoz at 3-1-1.

The resident’s public comments were not about that race.

The 18 residents spoke on three main concerns: an exclusive negotiation agreement with Singpoli Group to develop the former BKK Landfill, Mayor Pro Tem Tony Wu’s quote in the San Gabriel Valley Tribune regarding the election results, and the budget committee.

The BKK agreement, item 10, was removed from the consent calendar and reagendised for a future city council meeting.

The item was moved to the Dec. 18 meeting in order to allow the new council to vote on whether or not to approve the agreement. It was not moved to the Dec. 4 meeting because that meeting only serves as reorganization of the council, where the newly elected officials first step into the role.

This did not stop residents from explaining to the council their issues with giving Singpoli the contract.

Bill Robinson opened his public comment by recommending the council deny the proposal, and spoke of the land as a defacto wildlife sanctuary.

There were also concerns of safety with the hazardous waste.

Residents said that a hotel on the toxic waste dump would not be a four or five star hotel, and that a hotel there would worsen the gridlock on Azusa Avenue and Amar Road.

Even with six lanes on Azusa, traffic piles up. One resident said she spent 20 minutes in traffic waiting, after leaving to get to her destination 50 minutes early. They added they barely made it in time, despite thinking they would have plenty of time to spare.

Extending the contract would give Singpoli continued control over the space, raising more concerns.

As for the concerns on Wu’s quote, the mayor pro tem had told the Tribune this about the election results:

“I used to complain about not having a majority behind me, and now I got my wish,” Wu said. “The full responsibility is on our shoulders now.”

Three residents brought up this quote and voiced concerns that the two candidates Wu had endorsed would be indebted to him.

Muddying this further, Wu wants to increase revenues through selling the space of the BKK landfill, and his statement has some residents thinking the new council (which the item was pulled for) may be pressured to vote with him.

The contract to sell the BKK Landfill was not the only financial concern on the mind of residents.

Jim Grivich spoke about the budget committee and said that he does not think a membership proposal structure is fair and suggested they use the committee structure instead.

He also advocated for more meetings than twice a year, adding that additional oversight is needed.

The changing of the council will take place on Dec. 4, and the contract with Singpoli for the BKK Landfill will be on the Dec. 18 meeting’s agenda.