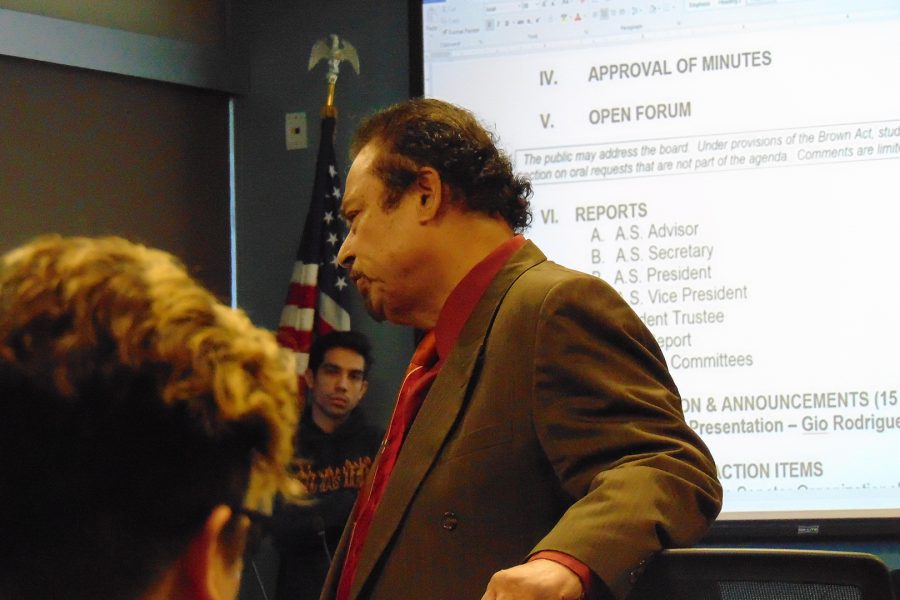 MEChA took over the Oct. 30 Associated Students’ senate meeting to advocate for the Indigenous People’s Fountain, Ethnic Studies classes and programs, and a center for Latinx students.

Senate meetings usually takes about an hour and a half, but MEChA members and their allies filled the room taking 50 minutes for public comment.

Of the 21 people who spoke in public comment, 20 of them were in direct support of MEChA’s cause.

The single comment that did not pertain to advocacy was from an IDEAS and Circle K member who had concerns about using the Wi-Fi with their Mt. SAC login without any interface that confirms the router is officially from Mt. SAC.

Of large concern is the lack of maintenance for the Indigenous People’s Fountain, and how the fountain is not constantly running, while the Founder’s Hall fountain is.

Co-vice chair of MEChA and point person for the Fountain of Indigenous Peoples of the World Restoration Committee, Pedro Mariano Gonzalez said the water was not cleaned, and that mosquito larvae and worms grow out of the stagnant water.

The fountain was supposed to be running on Oct. 24, Gonzales said during public comment.

He asked for the fountain to be cleaned, fixed, turned on, and kept running year-round.

History professor April Tellez brought her whole class to the meeting, and her students filled the walls to an already full chambers.

Tellez asked if she could speak as her class came in, to a resounding yes from the senate chair and Associated Students advisers. Senate Chair Richmond Tang told her she could speak when she was ready

“I was born ready,” Tellez said in response.

She told the student body that she and her students were in full support, and that establishing a safe space is critically important.

LAMBDA President Jay Chagolla spoke in support of MEChA’s initiative to show they are supported by other clubs.

Manuel Castillejos, Spanish professor, spoke of the historical aspect of the motion, adding that Mt. SAC used to have a center for the Latinx community when he first came to the campus.

“We’re begging to start programs we had in the past,” Castillejos added.

He also brought up that Mt. SAC is a learning institution, but that it is not encouraging students to learn about their roots.

To the people advocating, he gave these closing remarks with a voice on the verge of tears:

“[You have] a lot of people behind you”

Jesus Garcia, Inter-Club Council Co-chair, delivered a speech in his public comment after describing his displeasure with the lack of availability for Art 12.

“I am not ashamed of where I come from,” Garcia said.

With regards to his position, he said this:

“I’m willing to do anything, even if I get in trouble, because enough is enough.”

Even Shadiyah Omar, Associated Students President, spoke in favor of MEChA’s proposal, saying she is in “full support of this motion.”

Although the senate could not act on the issue at this meeting, the advisers recommended the issue be added to the Associated Student’s report on Nov. 14.

Andrea “Andi” Sims later added in her executive board report that another call was made regarding the fountain, and that it should be up and running soon.

It is yet to be known if that call will result in immediate action for the fountain, but MEChA also has a center and classes to advocate for.