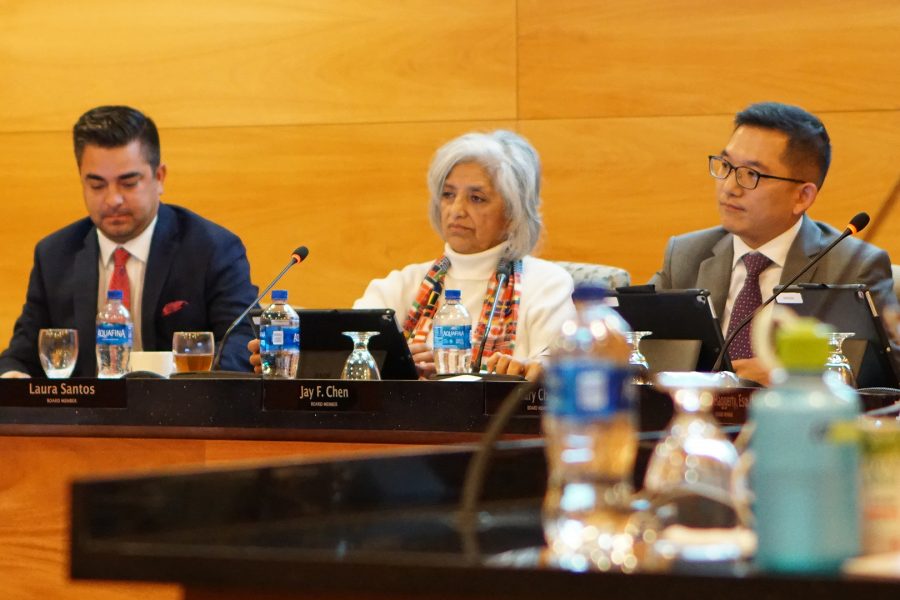 At most board meetings, Clerk Laura Santos questioned the bidding process that awarded Tilden-Coil Constructors several construction jobs on campus.

On Jan. 9, Santos had her recurring request put on the agenda; there was a lengthy discussion on community workforce agreements.

CWAs are pre-hire collective bargaining agreements that establish terms and conditions of employment for construction, set up by labor unions.

This discussion involved three people and the board.

Hannan, of before, alongside his boss Executive Secretary Ron Miller spoke in favor of CWAs and the executive director of the Coalition for Fair Employment in California, Eric Christen spoke against them.

Hannan spoke about 23 years in construction and how over 140,000 project labor agreements (CWAs) were entered by their group. He also brought up how their group allows student apprentices to complete a four to five year course without debt to become carpenters.

Christen spent his two minutes asking for an informational session so that both sides can be heard. Christen added that this was a big decision that would change how projects and bidding is done in all future projects.

Christen said that PLAs (CWAs) have all workers pay into the labor union, even though the money will not help them. He concluded by asking for the session.

Both sides attempted to refute each other’s points, and people in attendance shook their heads when incorrect things were said.

One notable takeaway was Hannan’s response to Christen’s request for a study session.

Hannan alleged that Christen asked for a study session at a different meeting and did not show up to that meeting. He added that he respects the board’s time and wants to do it now, because the parties are here now.

At this point everybody in attendance shifted in their seat and Mt. SAC President William “Bill” Scroggins said that the board must not rush into this.

Trustee Judy Chen Haggerty said that the board needed proof of the claims Hannan and suggested a separate study session for this subject. The board added several items to the original board study session, and this issue would have packed an already full study session.

Chen Haggerty would later be challenged by Hannan when addressing a concern of hers.

She brought up the duty of the board to be fiscally responsible and in one of Hannan’s responses to her points he asks a “rhetorical question.”

“Please tell me how that’s not financially prudent,” Hannan said to Chen Haggerty.

“I don’t have to answer your question,” Chen Haggerty said in response.

Trustee Rosanne Bader asked for Christen to be heard from, but Board President Robert Hidalgo called for the discussion to continue later and called it new territory for everyone.