Among other issues, Cisneros said he is not willing to trade Trump’s wall for anything 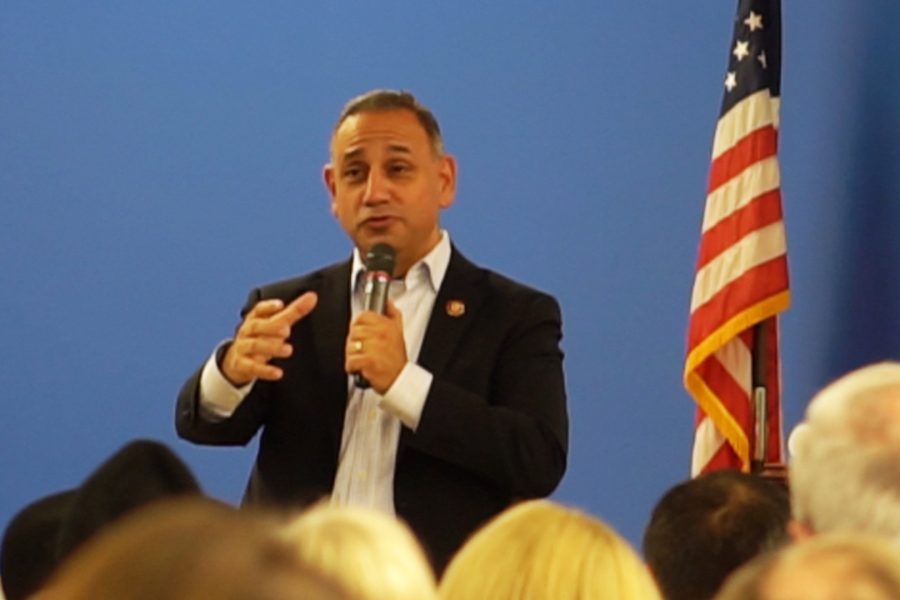 Disclaimer: The author of this article has made opinionated public statements regarding this candidate in the past. For the sake of transparency, the author has embedded those comments so that readers may make their own judgement as to whether there is any bias in the article.

Before answering questions, Cisneros explained that he took the oath in the middle of the shutdown on Jan. 3 and that he voted every day to fund the Department of Homeland Security and reopen the government.

He also fielded questions on issues including the wall, homeless, and his signature on a letter opposing Nancy Pelosi and later support among others.

Regarding the wall, Cisneros was asked if he would be willing to give money for the wall in exchange for protection of those under the DREAM act. Cisneros first started by saying the wall was not the best possible way to protect the border, and named technologies that are used to secure the border.

He then said that the wall and DREAMers are separate issues and that he is “not willing to exchange the wall for anything.”

Another comment Cisneros made regarding the border was that the situation was not a crisis by asking, “What crisis?” when a speaker phrased the situation as one. Cisneros later said that he has faith in the government and that he holds out to to think that something can happen, but added to that, “I watch Rachel Maddow just like all of you.”

In addressing concerns raised about the homeless, Cisneros also brought up spending.after explaining how the Placentia veteran’s home and Buena Park city council were taking the lead on addressing homelessness,

He said that one issue is getting federal dollars spent so that the issue can be worked on and that a solution can be found.

For the issue involving the speaker of the house, Cisneros said “I never said I’d never vote for her” even though he joined the agreement to not vote for Pelosi early on. He said that a significant part of his campaign was centered on getting new voices, and that once Pelosi said she would bring term limits the party and it’s top three leadership roles he decided to vote for her to become speaker.

Cisneros later clarified after the town hall that Pelosi had been in the party for a long time and that not too many people had moved up in the party. Once Pelosi advocated for term limits, Cisneros said he was glad she was creating opportunity.

Regarding prior allegations, he gave no further comments other than that it was a misunderstanding that was dealt with and talked through. He added that he respects everyone and that at this event restrictions were in place as a precaution to keep people safe. (There were to be no bags, and free tickets would give security a head count of attendees.)

This safety precaution followed at least two incidents during the campaign. Cisneros said that somebody shattered a window by shooting at his office and that his yard had trash thrown at it. No one was hurt in either instance.

Cisneros has said that he is now starting out fresh and it is taking a while to get the field office in Diamond Bar and everything else set up, but that despite the backlog and staff not receiving their business cards yet things were good.

Martin Medrano, president of HLPUSD and representative of Cisneros said that he still tripped out at the event that he was there with Cisneros. Medrano also said that he was easy to work with when they first met and that the lottery did not change him. He considered himself lucky and said the two jobs of his worked out well.

LAHS Principal Jeffrey Hess made coffee and was all smiles at the event. He said the school was not part of any restrictions and that anytime alumni of the school, like Medrano, want to come back that he is willing to have them. Hess said Medrano called him a week or a week and a half in advance, and that was why Cisneros’ first town hall was in Hacienda Heights.