Following another investigation, a second appeal was requested 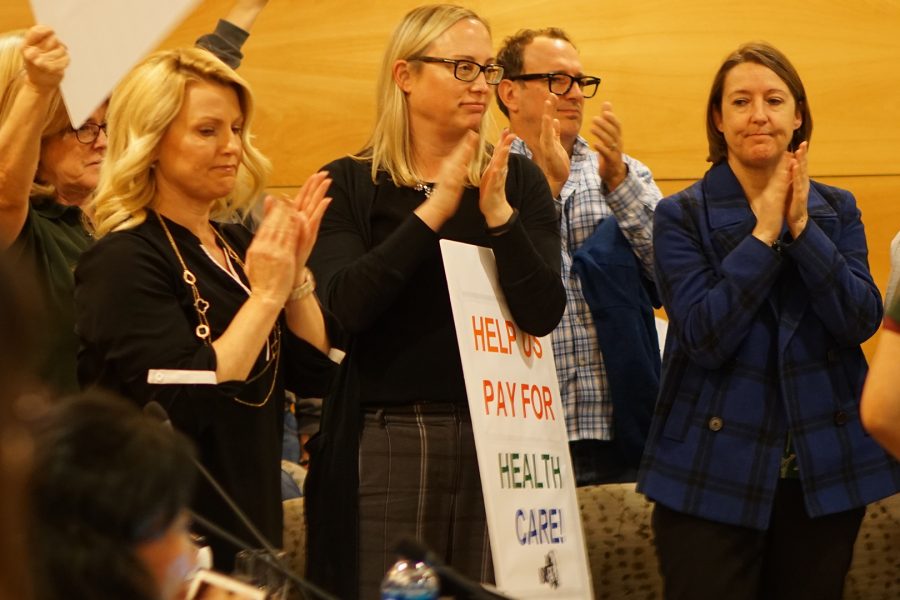 Abby Wood claps for the Faculty Association public comments despite the decision on her appeal. Photo Credit: Joshua Sanchez/SAC.Media.

In back to back meetings, professors have made allegations against management officials.

The resulting decisions have been the same – the Mt. San Antonio Community College Board of Trustees upheld the determination made in the HR investigation.

Yet the handling of each situation during public comment and the allegations being made were in stark contrast.

In the prior allegation, speech instructor Julie Laverty alleged that Associate Vice President of Instruction, Joumana McGowan, discriminated against her on Oct. 12 at a guided pathways meeting. According to Laverty, the impact of this guided pathways meeting would be the inability to move up in management with the alleged damage to her reputation by the manager.

In this allegation, Paralegal professor Abby Wood alleged that the business department treated her differently after former Academic Senate president Martin Jones-Ramey came forward with information regarding degrees held by the Associate Dean of Business, Fawaz Al-Malood, from unaccredited universities.

Wood said that Ramey told her that Al-Malood believes Wood had been one of two individuals to come forward about the degrees in question and believes she had “put Ramey up” to revealing them. According to Wood, this investigation resulted in poorer performance evaluations and being questioned by Al-Malood.

“On two occasions, Fawaz asked Marty whether I was responsible for the exposure of his degrees and Marty told him that I was not,” Wood said.

From three speakers and scant attendance of Laverty’s meeting, there were now seven speakers and a full audience of faculty waiting to protest the potential healthcare move in open session.

Galbraith read a statement where she said the allegations, which also involved her as dean of the business department, are not true and that she has continued to support Wood.

“Recently, professor Abby Wood has made several unsubstantiated complaints against me stating that I harassed and retaliated against her,” Galbraith said.

Ramey’s declaration was made under penalty of perjury under the laws of the state of California and the United States that what he had written is true and correct.

“In January of 2018, I took evidence of Fawaz Al-Malood’s unaccredited degrees to human resources. Shortly thereafter Fawaz asked me whether Abby and another colleague had put me up to going to human resources. I responded that ‘no, they had not.’ Fawaz, however, appears to have continued in his belief that Abby was involved since he asked me about her involvement for a second time in July of 2018,” Kaljumagi read of Ramey’s declaration.

Sholars said she believed the decision made by HR was wrong and asked the Board of Trustees to look at the impact of their actions not only today, but in the future.

“If your decision is to deny the appeal, I implore you to consider other actions that you can direct the college to take to work on these relationships,” Sholars said.

The unaccredited degrees in question are a doctorate from Pacific Western University, which was listed on the college catalog from 2006 until the 2016-2017 academic year, and a master’s degree from Columbus University.

Both degrees have not been listed on Al-Malood’s page since the 2016-2017 academic year and they are from colleges that are now unaccredited.

Al-Malood’s staff biography now has a new master’s degree in management and leadership from the Western Governors University, that was previously not listed. In addition, a diploma from the Hotel Institute Montreux and another doctorate from the University of South Africa were not listed prior to the 2016-2017 academic year and were also added to his page.

The remaining degree, that by all other accounts has been listed since the beginning, is a bachelor’s degree from the University of South Carolina.

The concern with these degrees is that according to government law, 5 CCR § 53420, Minimum Qualifications for Educational Administrators, a master’s degree from an accredited institution is required alongside one year of formal related experience.

While that code is in place for all California community colleges, Mt. SAC allows for equivalencies if requested. When filling out a faculty application, prospective faculty have to certify that “all statements made in their application are true and correct to the best of their knowledge and authorize investigation of all statements recorded.”

Another important distinction to note regarding the degrees and the timeline of the catalog archive (which lists what degrees were under his name on the website during each academic years) is that Al-Malood was hired in 2003, and the catalog archive only goes back to 2006.

Al-Malood maintained his innocence in his public comment after Wood and did not address Wood’s allegation that he continued to ask Ramey who brought the degrees to his attention.

Scroggins asked Laverty to “just address the events upon which” the item was regarding, but an loud audible “absolutely” from Laverty drained out the remainder of Scroggins’ words.

When Ferguson went to attest to the character of professor Laverty, Scroggins audibly said “make your comments to the complaint itself.”