This movie is one crazy party!! 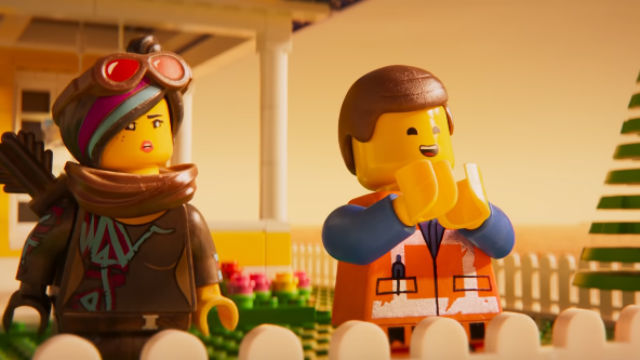 “The Lego Movie 2: The Second Part” is unabashedly zany, almost to a fault. However, once all the mess and chaos settle to reveal a distinctly human heart, it’s impossible not to be instantly enchanted by its very clever ruse.

It is a movie built from child’s play, a sequel following the original’s grand reveal that characters Emmet (Chris Pratt), Lucy (Elizabeth Banks) and Batman (Will Arnett) are playthings inherited by a boy (Jadon Sand) from his father (Will Ferrell).

In the end of Phil Lord and Christopher Miller’s “The Lego Movie,” the characters encounter a new threat when the boy’s younger sister is allowed to play with the toys, which results in cutesy aliens invading the already patchwork world of Emmet and his friends. Thus, the sequel almost makes no sense, looking and feeling like a lawless mishmash of anything and everything.

Mike Mitchell, who helmed “Trolls,” which like “The Lego Movie” has that distinct quality of merging straightforward storytelling and playful imagination, takes over as director of the sequel. Despite the changing of the guards, “The Lego Movie 2: The Second Part” doesn’t feel like a separate film, as the story continues where the original left off.

The world has been turned into a Mad Max-like dystopian wasteland where it is just Emmett who remains positive and hopeful despite his friends and surroundings being constantly attacked by aliens sporting smileys and spouting silly slogans. One day, General Mayhem (Stephanie Beatriz), a masked agent, arrives in their world to invite representatives to attend an important wedding. This eventually leads to Lucy, Batman and Emmet’s other friends to get kidnapped and transported to the alien’s world, which is ruled by a shape-shifting queen (Tiffany Hadish) who wants to wed Batman. Emmet decides to ride a spaceship to rescue his friends.

This movie is definitely sharp, savvy and profound! If the story seems confusing, it is only because it is meant to be confusing. It aspires to carve a coherent narrative out of the DIY-mechanics of the Lego toys, which allows kids and adults to create whatever their imagination can conceive.

The movie purposefully throws logic and common sense out of the picture to evoke the spontaneity of a toddler’s tale as told through the trademarked toys that he or she is playing with. What’s left is mostly a flood of giggly noise, color and as much gags and wit to string the story together.

However unlikely, there is real depth amidst all the film’s rabid madness. “The Lego Movie” sang about how everything is awesome, almost foolishly declaring that the appeal of youth will trump the apparent doldrums of adulthood. In the sequel, the message matures, backtracking not just a bit to say that everything is not awesome, that there is room for compromise, that there is an avenue for sorrow and disappointment to become motivations, and that things and people do change.

Simply put, the surprises of “The Lego Movie 2: The Second Part” are not just sharp and savvy. They are also profound.

“The Lego Movie 2: The Second Part” is one crazy party. It is truly a lot of brazen fun. More importantly, it reinforces all its unadulterated joy with weight and wisdom.