Forever 21 (And Forever in a Landfill)

How our favorite fashion stores exacerbate issues on all levels 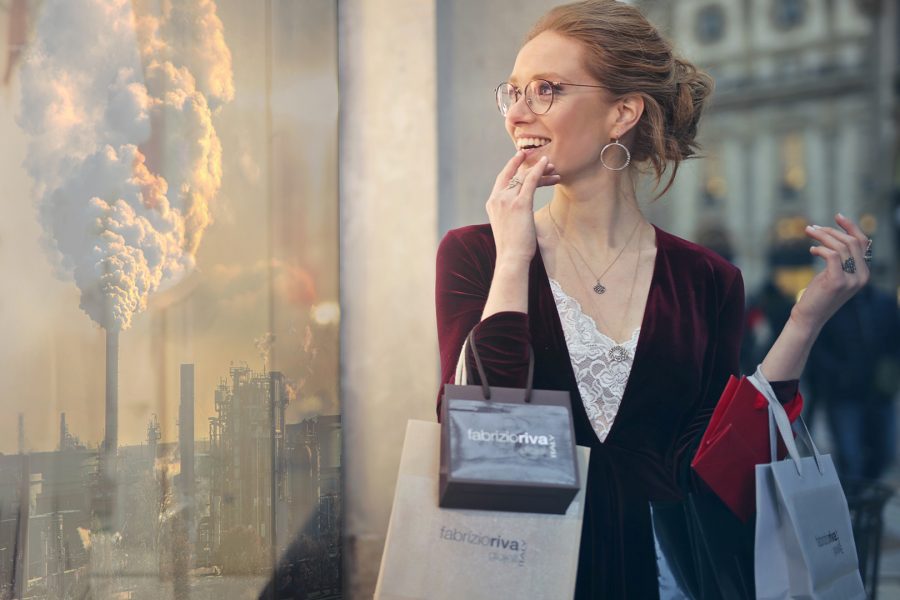 It’s a hard pill to swallow, but it’s the truth; we need to stop shopping at practically all of our favorite clothing stores.

Companies that quickly adapt runway fashion trends to everyday clothing and swiftly manufacture them in large quantities are known today as “fast fashion.” Forever 21, H&M, Zara, and more fast fashion brands dominate the everyday fashion industry, having made their fortunes off of selling trendy and inexpensive clothing. But cheap prices come with hidden costs that cannot be measured in dollar signs. Instead, they’re measured in human lives and tons of garbage.

In 2013, a building in Bangladesh hosting multiple factories collapsed, claiming the lives of reportedly more than 1,000 people when the search for survivors ended. Walmart and Mango were amongst some of the many European and American companies that produced clothing there. In an effort to prevent future deadly incidents, many of the companies announced plans to increase worker safety in Bangladesh.

But one question still stands. Why Bangladesh?

Deep down, though, the answer is obvious to all of us. The workers are paid measly salaries, and in other words, Bangladesh provides cheap labor. And cheap labor means low wages and a blind eye towards safety violations. When fast fashion companies such as Walmart place pressure on factories to produce clothing quickly, it’s easy for factory owners to forgo repairs and livable wages in favor of profits. That means the companies that outsource production in other countries, mostly developing ones, have some of the blood on their hands as well. Despite promises from companies that they will strive to increase safety, one thing is clear; this will not get better unless the workers in the factories they exploit are paid fairly.

Not only do the fast fashion companies exploit cheap labor and care little about the laborers in foreign countries, they also play one of the biggest roles in our environmental waste buildup. The industry of fashion is one of the worst contributors to pollution.

In an article published by the Independent, it states, “Criticisms of fast fashion include its negative environmental impact, water pollution, the use of toxic chemicals and increasing levels of textile waste.”

One example of the harshness of fast fashion’s environmental impact is in one of the things we love the most about our clothes: color.

According to the same article by the Independent, the colors and patterns we see in clothing are largely due to dyes containing toxic chemicals. It also says, “Textile dyeing is the second largest polluter of clean water globally, after agriculture.” While we believe the bright colors elevate our wardrobe, they actually do real harm to the environment and the natural world.

The issues don’t stop there, though. The largest household-name fashion retailers constantly steal ideas from artists, designers and sometimes even cultures in the name of “trendiness,” and it’s completely legal due to America’s obsolete copyright laws. We call them knockoffs; artists call them theft.

Zara, whose CEO, Amancio Ortega, is the sixth richest person in the world, is one of the worst perpetrators of this. In July 2016, an independent artist, Tuesday Bassen, claimed Zara had copied her art for their own products. Then in August 2016, Zara was accused of stealing a shoe design from Aurora James, a designer for Brother Vellies.

It is clear that fast fashion companies are willing to cut multiple corners, and perhaps even all of them, to make their billions. One way this can stop is for consumers to demand transparency from these companies, but the constant discrepancies between the brands’ statements and their actual actions just leaves one sadly hoping for more. An even more effective way is to stop buying from these brands altogether.

An alternative to fast fashion is buying secondhand clothing, usually from thrift stores, which has become more of a trend with younger consumers. For those looking to buy new clothing, several brands promote transparency, sustainability and ethical practices. One of the more popular companies, Everlane, has recently released its own sneaker brand, Tread by Everlane. The clothing that is produced by these companies is meant to last for years on end and does not promote or adapt to trends that die out quickly.

Shopping in these ways guarantees that someone is not suffering to put the clothes on our backs and causing century-long consequences on the planet. Realizing the impact consumerism of fast fashion has had on the planet and the people that live in it is the key to helping thousands of people around the world, in one way or another. There’s a price to be paid in our cheap clothing. But for the most part, we’re not the ones paying for it.