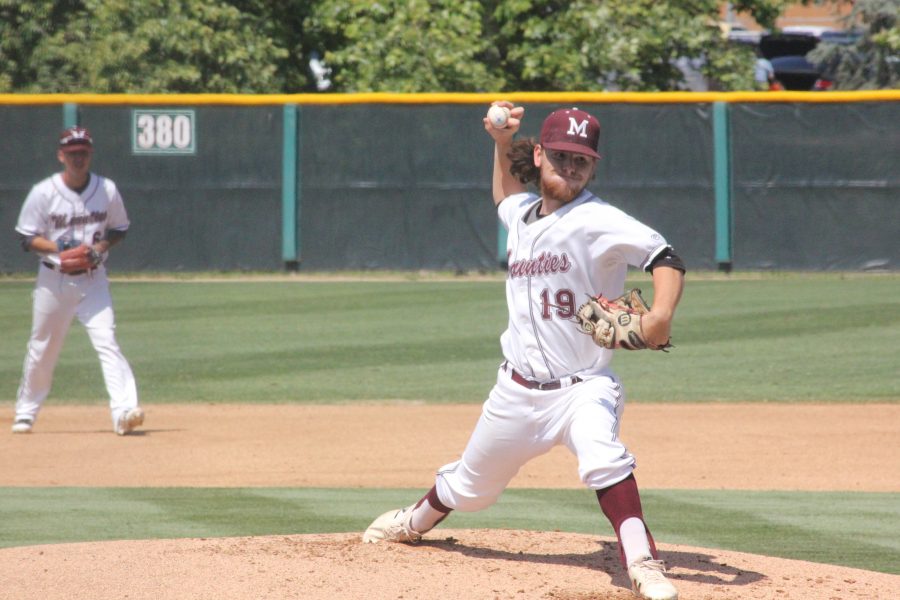 The comeback kings have done it again. After being soundly defeated in game one on Friday afternoon, the Mt. SAC baseball team beat Santa Ana 11-5 in Game Two and 16-10 in game three on Saturday to win the best-of-three series and advance to the CCCAA SoCal Super Regionals.

The Mounties were forced to win the remaining two games of the series in order to keep their season alive after being walloped 15-5 in game one.

In game two, the Mounties started RHP Matt Garcia who gave the Mounties four plus innings of solid pitching, keeping the team in the game before giving way to RHP Steven Ordorica who shut the door on Santa Ana’s hitters the rest of the way allowing zero runs and striking out three in the final four innings.

“Steven Ordorica, what can you say about that guy? Came into the game in the fifth of a tie game and finished it and didn’t give up a run,” Head Coach John Knott said.

The Mt. SAC bats woke up from their slumber in game two, although ironically, the first two Mt. SAC runs were scored without any hits. A couple of drawn walks followed by a couple of errors by Santa Ana allowed for Dylan Zavala and Caleb Eills to score in the first inning.

As soon as Mt. SAC had the lead however, they lost it. A two out rally in the second inning by Santa Ana plated three runs and gave the lead to the Dons.

Both teams traded runs back and forth until the sixth inning when Mt. SAC would take the lead and keep it the rest of the way. Catcher Omar Veloz doubled to begin the inning and Eills brought him home two batters later. An RBI groundout by Albert Leuvano and a passed ball brought in two more runs making it 8-5 and Mt. SAC had full control of the game.

With Ordorica mowing down Santa Ana batters with ease, Mt. SAC took advantage and added three more runs to close out game two with a final score of 11-5.

With the game two win, step one of the comeback was completed.

“The group showed up ready to play, you could tell there was some energy and passion, they wanted to be here,” Knott said.

A winner-take-all game three was forced and was played 30 minutes after the conclusion of game two.

According to Mt. SAC shortstop Michael Sandoval, the deciding factor of game three didn’t even happen in game three.

That sparked a fire in the Mt. SAC players.

“If that didn’t happen I don’t think we come out with this much fire to be honest,” Sandoval said. “That got us going.”

And they came out guns blazing. Game three began with a 14-run first inning by Mt. SAC which was highlighted by a moonshot home run by Veloz. Santa Ana was forced to use three pitchers in the first inning in which they gave up four walks, three hit-by-pitches, and seven hits, all culminating in 14 runs allowed.

“It was a nice little inning,” Sandoval said.

Mt. SAC kept the pressure on as they tacked on two more runs in the second inning. RBI singles by Alex Gonzalez and Sandoval made it 16-0 and the sun began to set on Santa Ana’s season.

However, Mt. SAC would not add anymore runs in the game and Santa Ana made things interesting by scoring ten unanswered runs and the score stood at 16-10 heading to the ninth inning.

“We began to lose a little focus, got too comfortable with the lead,” Gonzalez said.

Even with a much closer game, the Mounties confidence didn’t waver and Noah Woodall came into the game in the eighth inning and struck out four batters, including for the final out of the day, to end the Santa Ana rally and send the Dons home.

The comeback kings now move on to face Riverside City College in the Super Regionals next weekend.

Mt. SAC and RCC had a two game series in late January and RCC won both games.

RCC is the higher seed and will host the three game series but what is clear is that Mt. SAC is not afraid.

“We’ve played them before, we can compete with anyone,” Gonzalez said.

Game one of the Super Regionals is Thursday at Riverside City College.