For Dee Howe, horse whispering is just the beginning 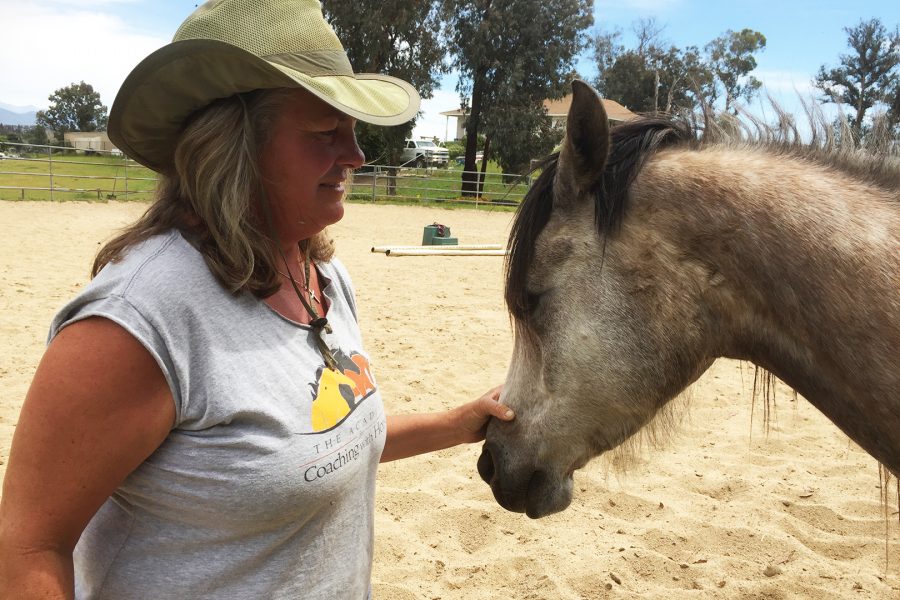 Dee Howe, horse therapist, with one of her horses on her ranch in CA. Photo credit: C. N. Dale/ SAC.Media

She speaks the language of horses. She has the ability to detect subtle physiological signs that a horse is experiencing pain, discomfort or stress. She spent her entire life observing horses and solving their problems. She practices the art of holistic medicine, using an intuitive combination of integrative modalities to heal. She is Dee Howe, California’s holistic horse healer.

Horse whispering is the art of listening to horses and communicating with them in their language. The goal of horse whisperers is training a horse for whatever activity the owner desires. Like a horse whisperer, Howe listens with a combination of five senses: sight, sound, touch, gut instinct, and heart. Howe started listening because she just plain loved horses.

“I was born with horses on the brain…” Howe said. “Wherever I went I was always finding a horse around or looking for horses. I knew in third grade that I was going to have a horse someday.”

Although it was clear from the beginning that Howe had a special connection with horses, she had to learn how to communicate with them. “I watched and knew them from the inside out. Then, I started studying the energetics and how they communicate with each other. The key is that I’m always listening,” she said.

As Howe approaches a horse, her focus narrows. During this time, it seems that a client’s efforts to explain a horse’s condition become like an insect buzzing around her, something she mostly tunes out. Instead, she concentrates intently on what the horse is saying. The wet and dry markings from dirt and moisture that adhere to a horse’s coat; the position of the horse’s ears, head and body; and the way in which a horse moves, are all telling Howe something about what that horse is thinking and feeling.

These days communicating with horses is Howe’s first step in her process. Early in her career Howe realized that many training issues result from physical or psychological pain and/or horse and rider imbalances. As a result, Howe dedicated herself to learning the art of healing in order to help horse and rider move free from pain and in balance.

Not all veterinarians approve of the use of alternative therapies. In 2016, the article “Alternative Medicine is Infiltrating Veterinary Continuing Education” reported on a proposal by the Washington State Department of Health to allow complementary and alternative veterinary medicine CAVM training hours to comprise up to two-third of the proposed hour requirement for continuing education. The author, retired veterinarian Harriet Hall, quoted Dr. Carmen Czachor, DVM, as saying she feared this proposal would “put veterinary medicine back in the dark ages.” While in general agreement with this sentiment, the author suggests that some CAVM education could be useful by providing, “factual, unbiased information that [veterinarians] could use to help educate patients who ask about CAVM…They could be told that homeopathy is bogus and that evidence for acupuncture is compatible with a theatrical placebo.”

“I’m fortunate that I don’t encounter that sort of thinking very often,” Howe said when asked about these types of comments. “When I do, I just sort of smile and stay focussed on love and health.”

Howe has been focused on bestowing love and health on horses since she was 19 years old. It was at that time that she accepted a job working with Wil Howe, a horse trainer who became her mentor and later, her father-in-law.

“I was [the barn] manager and at one point we had enough horses that I had two people working under me and Sam (Howe’s future husband) was riding five or six horses and doing all the arena horses,” Howe said about that experience. “I did all the [rehabilitation], all the problem horses, and I got the reining and cutting horses ready [for competition].”

Howe said that accepting the job with Wil Howe was probably the best thing she ever did. “I told [Wil Howe], one year and I’d move on. Seven years later I moved on and took Sam [Howe] with me.”

Now her husband, as a former horse trainer, Sam knows what makes Dee excel with horses. “She works so hard and she has such passion for horses. She earnestly cares about every horse she comes in contact with,” Sam Howe said. “She’s so modest, too. There are very few people in the world at her level of equine craniosacral therapy but you’re unlikely to hear that from her. She’s incredibly gifted. She has a natural instinct for understanding horses and detecting their pain.”

Dee Howe is formally trained in modalities including craniosacral therapy, equine massage, gut health, impulse work and bodywork. Some of her training is human-focussed and some is horse-focussed. This knowledge of both species anatomy and physiology enables her to treat both horse and rider. Collectively, she refers to her skills as “bodywork.”

“I find I often need to treat both horse and rider because they are either mirroring or compensating for one another,” she said. “Since they work as a team, just balancing either horse or rider will not create long lasting results due to this tendency to compensate for one another.”

Clients of whom she has performed bodywork are often mystified as to what she has actually done to create results.

“She does this kind of magic thing. It works, but she’s working with energy and barely touching you so it’s hard to say exactly what she’s done,” client Kathy Stevens said. “I know she detects disruptions in energy flow in the body and gets it flowing again. I call it magic.”

Howe also healed Stevens’ horse, Dallas. “If it weren’t for Dee, my horse would be dead,” Stevens said. Despite having Dallas seen by two veterinarians and a chiropractor, the horse was in so much pain that Stevens thought she might need to have him euthanized. “After a few sessions with Dee he was so much better,” Stevens said. “What she does is amazing to me. She has this mystical connection with horses.”

When asked about her plans for the future, Howe said, “My goal in life is to help as many people as possible build strong relationships with horses.” In this regard, Howe will be adding an online course to her website so horse people who can’t work with her directly can learn some of these skills and use them to enhance their connection with their horse. They can visit Howe’s website here.