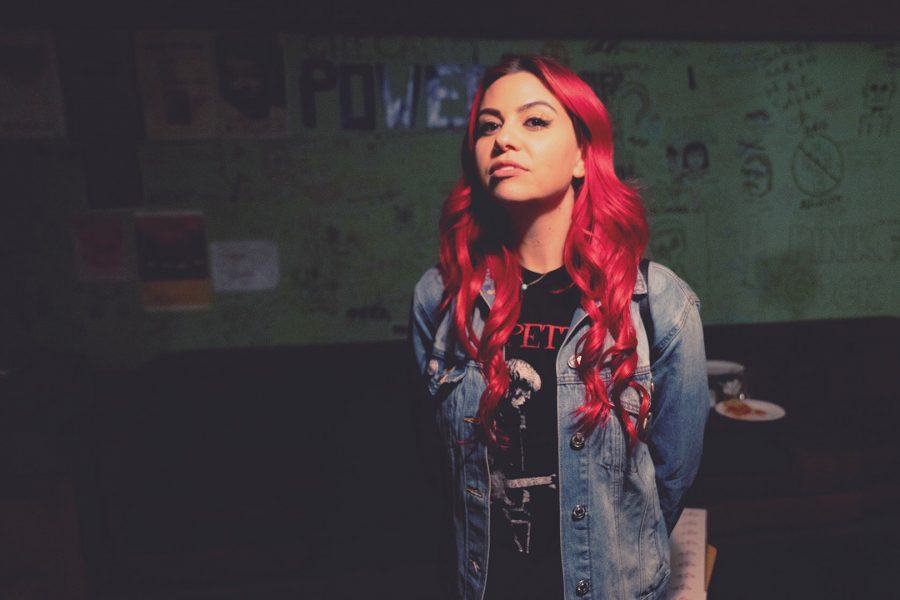 Her last name may sound as if it were a made up radio name, but it is derived from her actual last name. Her dad is Persian and his original last name was Yomtobian, which translates to holy day or good day. While living in the U.S. he wanted to fully Americanize, which led to it becoming Holiday.

Holiday, 32, was born and raised in Rancho Cucamonga, a place she loved growing up. She still finds time to visit her father who still lives there.

Holiday’s life has not always been as colorful as her hair. While in her early 20s, her journey in radio began, but radio was not the field she thought she would end up in.

“It was just something I fell into and I happen to be really good at,” Holiday said.

One day while living in the Bay Area, she attended a Live 105 summer show called BFD where she met Menace, a radio co-host who now works on “The Woody Show” on ALT 98.7. Menace used to be on at a station called Live 105 in San Francisco. He wanted Holiday to intern for the show after having talked with her. She had to put this opportunity on the backburner because she was still in college and there were time conflicts with her schedule.

“It planted a seed, and so when I graduated from college, I moved to San Diego for a year and I interned at a radio station called 91X,” Holiday said.

She planned to leave San Diego to return to the Bay Area and attend graduate school to obtain her marriage and family therapist license, but life had other plans.

Menace contacted her asking if she wanted to work on a new night show he was hosting. It didn’t take long for her to have her own weekend shift. There were challenges, though, like not knowing how to run a soundboard. Holiday said she was terrified and nervous to be on early mornings, but said it was liberating because she knew that not too many people were listening.

As time went on, Holiday felt she needed to develop her personality which led her to create this cool rocker chick character that was always laughing and having a good time. She said that hiding behind this character allowed her to have more confidence. Now she tries to just be herself.

“At that time I had no idea who I was. I was very insecure, I had some problems with some drugs. I did not have a lot of self-confidence so I sort of created a little bit of a character,” Holiday said.

But drugs would halt her career. She had experimented with drugs at 16, but by 18, it started to get out of hand. Substance use affected her life for 11 years. Towards the last five years of using she said that it got really bad. Now she was using speed and heroin. It was not until she was 29 that she finally quit.

“I had lost that radio job up in San Francisco because of my drug addiction and I didn’t do radio for a long time,” Holiday said.

She called her mom to tell her she needed to come home. She was working at a winery in the Bay Area, which wasn’t a great job for someone who also struggled with substance abuse. After moving back home, she was forced to accept that she needed to go into rehab.

“I didn’t know how to live life outside of being on drugs,” Holiday said.

She relapsed, but it only lasted less than a year. She felt like she had no quality of life, no future, no relationship with her family, and barely any friends left.

Holiday said there was a voice that some might call God that told her that if she did not stop now, she was going to die or end up in prison. She had already lost a friend who died from an overdose that hit her really hard. She decided to check herself in to a hospital, which led her to go into sober living.

“I just knew that something was coming for me and I could not keep going on the path that I was on,” Holiday said.

She has been open about her recovery from substance use on social media and on her podcast, The 7 Words. She’s been sober for three years.

Holiday said it is important to share her struggles and story with people because she wants them to know that they can get out of their situation if they are struggling with addiction and it is okay to reach out if they need help. Holiday said she believes that many people are affected by drug use because people are dying and overdosing.

“I just know for me that I had put my family through hell,” Holiday said.

She has been working at KROQ for the past three years and has been brought back to the Live 105 station in San Francisco, now called Alt 105.3.

Holiday loves working at KROQ and hopes to be there for a long time. In the future, she hopes to explore other avenues like voiceover work in animation since she said she likes doing silly voices. She wouldn’t mind working on TV as well.

Holiday has found her authentic self.

“I think I’m funny, I think I’m empathetic and I really care about people a lot. I’m definitely introspective so I like to think a lot about things. I like to observe the world and I’m pretty open-minded,” Holiday said.