Beautiful From Beginning To End

The Mt. SAC Wind Ensemble blew everyone away with their fitting theme “Beginning and Endings” 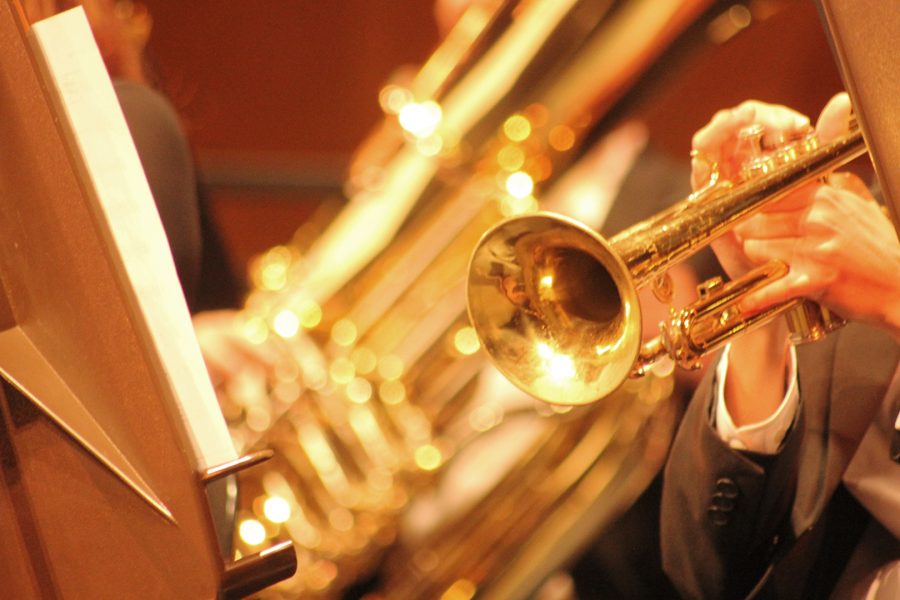 The Wind Ensemble at the Sophia B. Clarke Theater on May 22. Photo credit: Lauren Berny/ SAC.Media.

The golden instruments shimmered as the band played everything from flutes to clarinets, saxophones to trumpets. All the different sounds mixed together in no particular order, loudly and enthusiastically. Suddenly, all the sounds came to a halt and the air felt heavy with anticipation. Conductor, Dr. Gregory X. Whitmore, came to the stage in his black tuxedo, and with the flick of his, wrist the music began to play. The theme of the Wind Ensemble, Beginning and Endings, was powerful and fitting for the night. Each song gave you goosebumps as you listened on.

One of the most powerful songs in the set was “Requiem,” a beautiful and chilling piece that was a representation of “a Mass for the dead.” The song started off slow and tense as the performers played the flutes. Slowly more instruments begin to play on top of each other, building. By the time the drums were playing, you felt overwhelmed because of how the music seemed to transport you to a different time and space. The song took you on a journey, beautiful and sad, as you think about those who have had to fall for this song to be made.

Another really impressive song that was played was called “A German Requiem.” The band had to learn the snip-bit of this hour long song in just under 2 days with the help of guest conductor, Dr. Jamal Duncan from the University of Arkansas.

The next piece was one that the band learned is much more modern and new was a song called “Paper Cut” with the main instrument being paper. Some were crinkled, some were being ripped apart, some papers were in between the students hands as they clapped their hands together. It wasn’t until half way through the song where the students picked up some of their instruments. Throughout the song there was some kind of incorporated sound with paper. It was beautiful to watch and hear.

The final song of the night, “Reckoning” was one that began as an “underdog story: an unlikely heroes determination to right certain wrongs that had been brought upon him or her in the past and that hero’s ambition to prove that they are ‘a force to be reckoned with.’”

Overall the concert was very moving as each song seemed to tell a different story. From one song’s theme being an “ending” or a “beginning” it all seemed to work together in a cohesive way.