Several individuals successfully rallied to fund the Mountie MakerSpace, which serves over 1,000 students 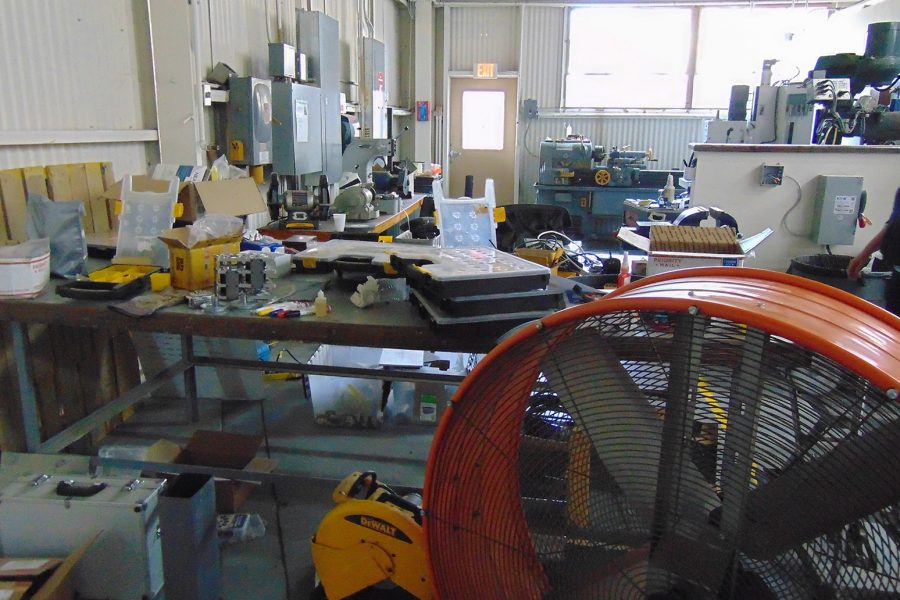 Inside the Mountie Makerspace the only source of ventilation is an orange fan that sits next to a table. Photo credit: Josh Sanchez/SAC.Media.

While the space is still not institutionalized, the Mountie MakerSpace has received temporary funding for the time being.

Originally, the 3,600-square-foot MakerSpace was set to close on May 31, when it would run out of state grant operating funds from the California Community College Chancellor’s Office.

As a result of this urgency, representatives and supporters of the space have attended Associated Students, Academic Senate and Board of Trustees meetings to fight for funding.

With Associated Students, they were granted a resolution and $1,089 in funding.

Mala Arthur, project manager from MakerSpace, spoke before the senate explaining why the facility is important and why the Senate should contribute support to them.

“We are desperately in need of finding at least some temporary funding, if not, permanent funding so that we can stay open,” she said.

She was joined by a group of students who benefit from MakerSpace, including English major Russell Savage. He explained how the space allows him to create things he imagines.

“For me, it has been a valuable tool just for creative expression. I can go in there and have access to tools that I normally wouldn’t,” Savage said.

“I was able to learn so many things from this. I feel so accomplished with all of the skills I’ve learned,” Moore said. “It’s so welcoming. It’s a huge community of students and faculty and people that are so willing to teach you what they know.”

Amid the protest at the Board of Trustees, three representatives for the space spoke first and asked for funding.

Arthur, alongside a few students, told the board about the unique benefits and accomplishments of their collaborative workspace.

“Our MakerSpace is not the average MakerSpace, we are seen as a model to emulate by many other community colleges and even our local four-year colleges,” Arthur said.

One of the students with her, Mt. SAC Experimental Rocket Team co-president Michael Menendez, spoke about how his team successfully launched a rocket more than 11,000 feet in preparation for an upcoming competition because of the MakerSpace.

“None of this would have been possible without the availability and resources that the MakerSpace provided,” Menendez said.

The space has been somewhat institutionalized for insurance purposes as a one unit community education course for community members to use the space. The course or its equivalent has been used by 62 community members as their way to becoming members of the MakerSpace.

According to physics and engineering department chair Martin Mason, the contract for the space does not include offering classes, but community education and instruction programs have been encouraged to use the space to supplement their course.

Construction technology has had courses utilize the space since Fall 2017, while noncredit woodworking was offered the space to use and declined it, citing problems with size and ventilation.

As a part of Measure GO, the MakerSpace is intended to be rebuilt towards the center of campus below 26D which would move it from its present location in a barn off of Temple Avenue and Bonita Avenue.

Mason said that staff completed an application for a National Science Foundation around November of last year to fund the space for three more years, and was preparing another strong workforce grant around the same time. He called the MakerSpace “a labor of love of dedicated students, staff and faculty” and added that the space had no ongoing funding unless funding was found.

Funding would be found in temporary immediate needs funding, where “immediate need” means a shortfall in funding that, unless funded immediately, could cause a program to cease to function.

Since the space has still not been institutionalized, because it does not necessarily generate full-time equivalency in enrollment, it remains in complicated funding status. Without funding or FTEs. the space is currently not self-sustainable.

Temporary funding was granted to the National Sciences Division in $16,653 of one time funds to support the MakerSpace from May 31 through June 30.

Academic Senate’s physics and engineering representative, Sarah Nichols, said that the president’s cabinet will review how to fund the space from July through October in the future.

It has a woodworking area with a CNC router, band saw, sanders and drill press. The metalworking area has a manual lathe, manual mill, band saw and CNC mill. The MakerSpace’s welding area has a plasma cutter, arbor press, hydraulic press, tube bender, grinders, a TIG welder and other welders. The final section of the MakerSpace is a clean room equipped with a 3D printer, vinyl cutter, laser cutter, heat transfer, and soldering electronics.

The MakerSpace has 1,391 members as of May 7 with over 32,335 hours combined spent in the space throughout its two years of existence. There have been 7,734 member visits to the MakerSpace and 63 classes from the arts, continuing education, natural sciences and technology and health divisions have utilized the space.

Full operations for the space would cost $270,946 a year and would be open 52 hours a week for 6 days a week with included winter hours. A barebones MakerSpace budget would be $122,615 a year and would only allow for the space to be open for 40 hours a week, weekdays only, without allowing me,bers of the community to be MakerSpace members unless the cost of membership was increased.

Students, faculty and staff are also currently free – which may have to change to fund the space.