For the Love of Choral Music

Love, peace, and harmony was present at the Mt. SAC Spring Choral Concert 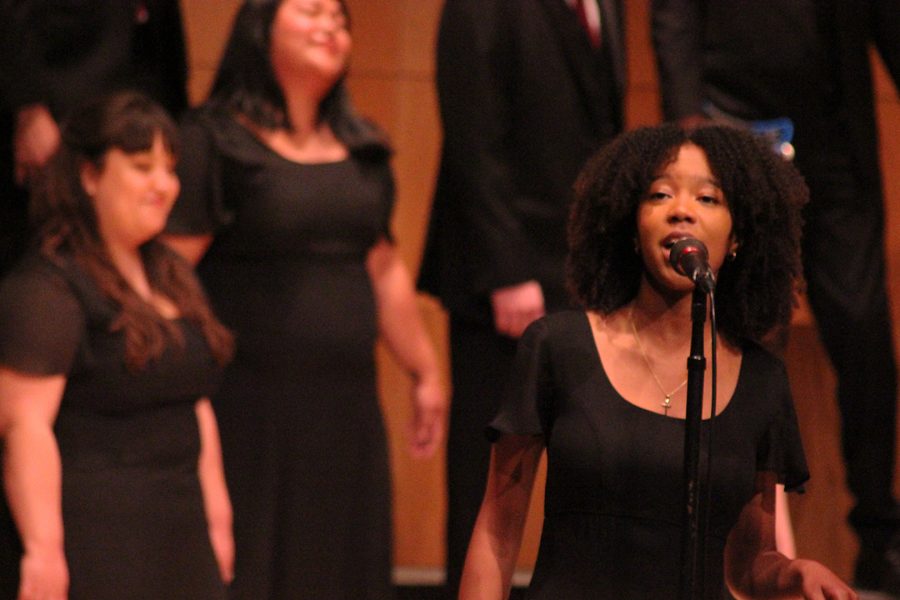 Joy Jackson, from the group Chamber Singers, sang, “Still I Rise” at the end of the Spring Choral Concert on May 31. Photo credit: Lauren Berny/SAC.Media.

The large black piano in the middle of the stage gave out a beautiful sound, as the pianist’s fingers danced on the keys. The singers sang out passionately and with gusto. The conductor directed them with his arms waving in the air to the times that the singers needed to sing high notes and the low notes to the song. William McIntosh’s facial expression during the beginning of the 25 anniversary of the Spring Choral Concert was large and animated as he too was singing along with the choir.

This year’s Spring Choral Concert showcased three different singing groups; Concert Choir, the all male acapella group Fermata Nowhere, and last but certainly not least, the Chamber Singers. The theme of the night was, “Sing for the Peace of the World.”

One of the first songs sung by the Concert Choir was called “Tchaka.” The song incorporated drums and salsa shakers that made you tap your feet to the music. The song is a metaphor for celebration and hope. According to music director, William McIntosh, that was the hardest song for the Choir to learn.

“The text keeps changing throughout the rhythms [which also kept] changing. It was really, really hard to memorize.”

McIntosh took a moment after “Tchaka” to introduce student director, Marcos Torres, for the next song. He told the audience that one day, Torres would make an amazing conductor for his great respect and passion for music. The song Torres conducted, “Look Back On Time,” was gentle and slow sounding. Torres did not take rush the song, but instead took his time to build the music. As the song came to an end, he finished it off with by blowing a sweet kiss to his fellow choir members.

The next group, Fermata Nowhere, sang a few slow songs that sounded both soothing and modest at first. McIntosh said that this group started back in 2000, most of their music being pop and jazz. During the concert, Fermata Nowhere was able to show a different side of themselves than their recent performance at Spring Thing. There wasn’t any bright red jumpsuits and no pop songs this time. Instead, the men wore their black tuxedos and sang much more slowly and with control. But for their final song, “Let’s Live It Up,” they gave to the audience that upbeat jazz song that reminded us of the Fermata Nowhere that we all know and love.

The final group of singers took the stage with stride and brought a little something different than the first two groups; they brought the world. They sang songs from Norway to Slovenia, Spain to Korea, and for their last song they brought it back to the United States with a gospel piece titled “Still I Rise.”

With each song, the performers had different formations. At one point, the singers were standing on the sides of the room in the aisles. Bruce Rogers, the conductor for the Chamber Singers, said that the purpose of this was to make the audience feel like they were in a cathedral. The singers then sang and Rogers was right, the cloud of sound and the singing all together gave it a little extra zest to the song.

At the end of the concert the crowd gave a standing ovation to all the singers and the conductors who performed. The really made for an entertaining and notable concert in the end.