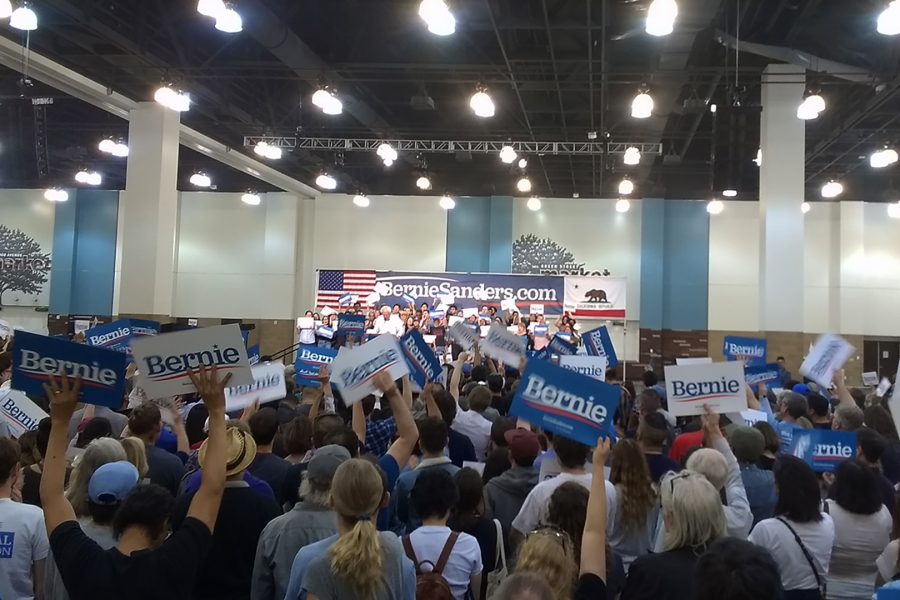 Bernie Sanders ralley at the Convention Center in Pasadena on May 31. Photo credit: Gayle Hardine/SAC.Media.

Bernie Sander’s Rally opened to a packed crowd of an estimated 3,000 people at the Pasadena Convention Center on May 31. Various California activists spoke in support of Sanders and comedian Danny Devito after long time Sanders supporter and co-owner of Ben and Jerry’s Ice Cream, Ben Cohen, introduced Sanders.

“Bernie inspires me because I’ve seen him in action, but more than that, you can believe what he says because he does what he says,” he said. “Bernie makes things happen that people thought could never be done.”

Sanders forced the first ever audit of the Federal Reserve Bank revealing huge conflicts of interest and loans to Wallstreet. Sanders introduced the ‘Stop BEZOS Act’ which stands for ‘Stop Bad Employers by Zeroing Out Subsidies’ forcing corporations to reimburse the government when they pay employees so low that the employees are forced to collect Medicaid and food stamps to survive. Amazon raised its wages to $15 an hour the next month.

Sanders went to the Walmart Shareholders Meeting on June 5 to demand action for the same thing according to Cohen.

“He’s always been the same, he never wavers. He has a clear vision for how to make America kind again,” he said. “Bernie doesn’t go with the trends, he sets the trends,” he said.

He knows the most important thing in this election is to beat Trump.

“Power to the People” played as Sanders walked onto the stage. “Please welcome the next first lady of the United States,” he said as he introduced his wife. “You all know that the message of this campaign is ‘Us not Me.’ The principles of our government will be justice: economic justice, racial justice, social justice and environmental justice.”

It is worrying that if a family member gets sick you will go bankrupt because you can’t afford the medical bills. We have a situation today in which the younger generation for the first time in history will have a lower standard of living than their parents. While people are having to work multiple jobs to make ends meet, 49% of all new income goes to the top 1 percent. Three families in the United States have more wealth than the bottom half.

“Stop the greed. You can not have it all. This country belongs to all of us not just the few,” said Sanders.

Sanders stated that he would work to end voter suppression. During his career he has won elections and lost elections, but it never occurred to him to find out who might vote against him and try to prevent them from voting.

“I say to those republican governors all over this country who are trying to make it hard for people of color, for poor people, for young people to vote. What I say to them is if you can not participate in a free, fair and open election get the hell out of politics,” said Sanders. “We want America to have the highest voter turnout of any major country not one of the lowest.”

“What this campaign is about, all of us banding together and caring about each other,” Sanders added.

If he were president he would advocate to have single payer Medicare for all, marijuana legalization, increasing the national minimum wage to $15 an hour, and to strengthen unions to create 15,000,000 jobs in order to repair the country’s infrastructure. Every city would have clean drinking water and affordable housing. There would be a revolution in education providing quality childcare for all children and colleges and universities will be free and student debt would end.

“If we can bail out Wallstreet, Wallstreet can now help the working families in this country,” he said.

He would implement a transaction tax on Wallstreet speculation to fund education. Not only will he not end social security, he plans to expand it.

One of his most important positions references climate change. He said we have 12 years to convert to sustainable energy before permanent damage is done and he considers it an existential and moral imperative to leave a clean and healthy environment for future generations. Cleaning up the environment would create good jobs so he would encourage the countries of world to come together and use the money they pay for weapons to save planet for future generations.

Sanders added that we need to fix the justice system and end for profit prisons because we have more people in jail than any other country on earth with a disproportionate number of black, Latino and Native American prisoners. Sanders said this money needs to go to education because it costs more to house a prisoner than to send them to the University of California.

Sanders strongly feels we need comprehensive immigration reform with a path to citizenship for the undocumented, protection for those in the DACA program, and a humane system for dealing with asylum seekers. Sanders said that under Trump there will only be a continuation of authoritarian oligarchy, where he supports a different path with respect for democracy and the constitution; however, no president can do it alone because it means taking on the corporate power structure in this country.

Jimmy Dore, a KPFK presenter who has covered Sander’s speeches in 2016, felt similarly and thought his speech was great and the place was packed.

“What he added is that he would talk to the other countries of the world as president and get them to cut their military spending and invest that money into fighting climate change,” Dore said. “Bernie’s appeal is only growing it’s not diminishing. Don’t listen to the mainstream media.”

Bruce Bagby likes everything about Sanders. He said Sander’s supporters are a broad spectrum of people, young, poor, rich and old. Bagby’s worried about the environment; he said that we knew it was a problem in the ’80s, but he thought them that we would have time and that the scientists would take care of it; we’ve done nothing since.

“Bernie’s been living what he says, he’s not a puppet he’s not a fake, for his whole life, since the early 60s,” he said. “That I think is the biggest reason why I’m a supporter, a huge supporter,” he said. Sanders inspired him to get involved. He never thought of public service until recently, but says he might join the school board or something. We all should be working on this he says, not just one man.

Annabelle Davis came with her children Ean, Sabrina, and Brianna who are all Sanders supporters. They say Sanders recognizes that environmental, racial, and criminal justice system issues are very real problems that have been overlooked.

“I’ve been a supporter of Bernie’s since high school and this will be the first time I’ll actually be able to vote for him,” said Ean. “He’s for the people, he fights for the little guy, essentially,” he said.

They all feel he really wants to help people who need it.

Davis is an immigrant herself, she came here as a child. She’s seen police misconduct towards people of color and she’s seen all the issues Sanders talks about.

Another Sanders supporter agreed with Sanders’ view on immigration.

“A baby should be with the daddy,” Art Theo, a naturalized citizen and immigrant from Thailand, said. “Trump is about taking a baby away from their parents.”

Theo was an Assistant Chaplain in the Army and is especially anxious to remove Trump from office. Although he is a US citizen and his wife has a green card, because the American Consulate in Thailand won’t respond to the paperwork, he cannot bring his 14 month old child to this country because the baby was born in Thailand.

His wife travels to Thailand every 4 months to see their baby. He is an avid Sanders supporter because he feels Sanders really understands his situation. He knows that in the past there would have been no question that the baby needs to be with his parents and supports everything about Sanders.