Construction Master Plans Cleared By Board 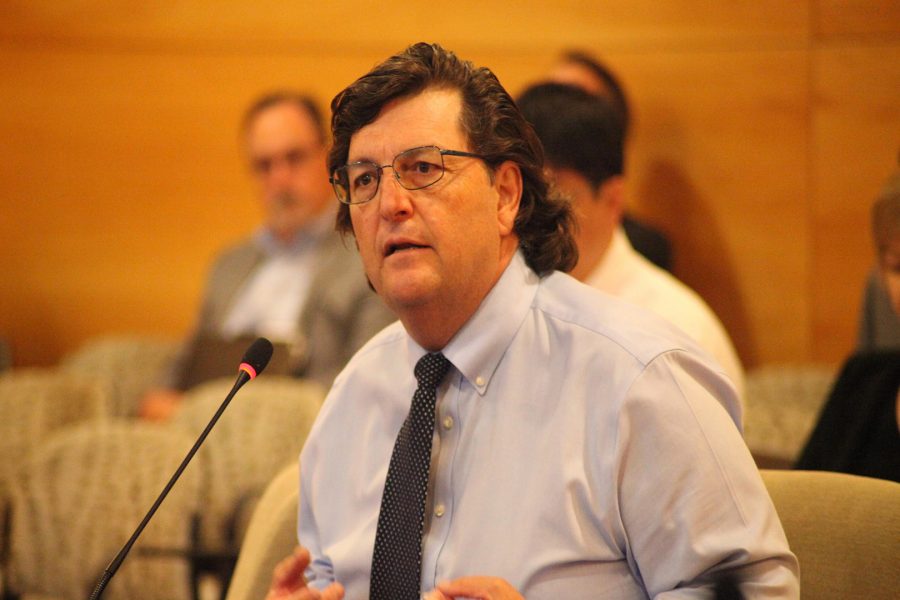 Gary Nelesen presented the Environmental Impact Report at the Board of Trustees meeting in the Founder’s Hall on June 5. Photo credit: Abraham Navarro/SAC.Media

After years of being referred to as a draft and a long delay to start construction on projects approved by Measure GO the two largest documents with the biggest impact on the campus were approved.

While United Walnut Taxpayers still voiced concerns on the potential consequences of the proposed development and master plan, two of their representatives called the plan well-written in comparison to past plans.

The board still heard a few of their concerns on June 5, but they referred to a second “responses to comments” document where written responses to concerns about the Environmental Impact Report were provided. The comments made did not require major changes, according to Facilities Planning and Management Director, Gary Nellesen.

The document becomes the primary document for the Educational Facilities Master Plan, which was also approved in the same motion alongside the statement of overriding considerations, the statement of facts and findings, and the mitigation monitoring program alongside approval of the parking structure R and tennis courts projects.

That language means the college can go forward on the full list of its proposed projects within the language provided.

The language included terms that UWT Dennis Majors said were intended to not be included as a result of the settlement, but Nellesen said that it was not necessary to remove such language because the proposed EIR is just a California Environmental Quality Act impact report and not a discussion of other agreements.

The board also approved three bids in the special session: one for a scoreboard, one for the tennis courts and structure, and one for the row building demolition.

Board member Jay Chen asked about the cost for the scoreboard and asked if it would screen advertisements while the field was not being used. Nellsen said that this was not considered for the $7 million four story scoreboard that faces Temple Avenue from south end of the field.

Nellesen said the plan for the row buildings is to have them destroyed over the summer, after removing asbestos and exterminating the rats.

Alongside the bids were three new agreements for architecture and construction along with one amendment regarding construction before discussing a final project proposal for the new technology and health building.

This building would be 50,000 square feet bigger and take even longer to start construction, starting six years from now where the pool currently is.

The college would pay $45 million and have state matching funds to build the design and technology center, and they also considered a $28 million renovation to building 28. The total footprint of the proposed building would fill up the space the pool and adjacent buildings take up. Nellesen said there was also a proposal to not renovate the old building and to just demolish it in order to save money.

He added that new building would provide more space for offices and help renovate the college from the current “1970s vintage” or otherwise “nonexistent” building features.

With the bids approved and the EIR passed, construction is now a green light for the previously passed Measure GO.